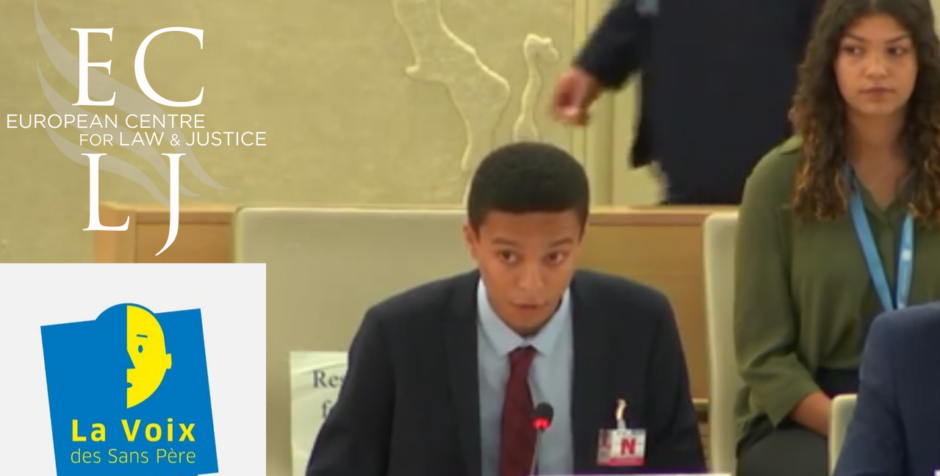 No to ART Creating Fatherless Children

The ECLJ invited the French association, la Voix des Sans Père (The Voice of the Fatherless) to make an oral intervention on its behalf during a general debate at the Human Rights Council (42nd Session, 16 September 2019), to denounce the French bill of law allowing for single and lesbian women to have children through Assisted Reproductive Technologies (ART). Such procedures deprive the child of his or her father and of his or her filiation.

I would like to alert the Council to a violation of the children's rights.

Thanks to new technologies, in vitro fertilization and artificial insemination, children can be conceived and given to women or men who have no biological link to the child.

In several Western countries, single women or women living together may have access to these techniques and are sometimes legally recognized both as "mothers" of the same child, depriving the latter of their father and true parentage.

The association The Voice of the Fatherless in France, and many others in Europe, gather numerous testimonies from children who have been deprived of their father. The absence of our father constitutes an irreparable suffering. Authorizing access to artificial procreation techniques on the simple criteria of desire replaces the parents' frustration of not having a child with an even greater frustration, that of the children being deprieved of their father, deprieved of any relationship with him for their whole life.

There is no right to a child, but a right for the child, guaranteed by the International Convention on the Rights of the Child in its article 7 "to know and be cared for by his or her parents".

France is going to violate this right by legalizing access to these technics for women in couples or single, and by removing the mention of the father in the civil status. All of these measures deprive the children of their father and suppress the men of the filiation!

The use of assisted reproductive technics should never justify the violation of children's rights by deliberately depriving them of their father or mother.

We call on this Council and its bodies to condemn these techniques for they violate children's rights and make them suffer. The U.N. sould reaffirm the right to paternity, the right that we, the fatherless, have been deprived of.