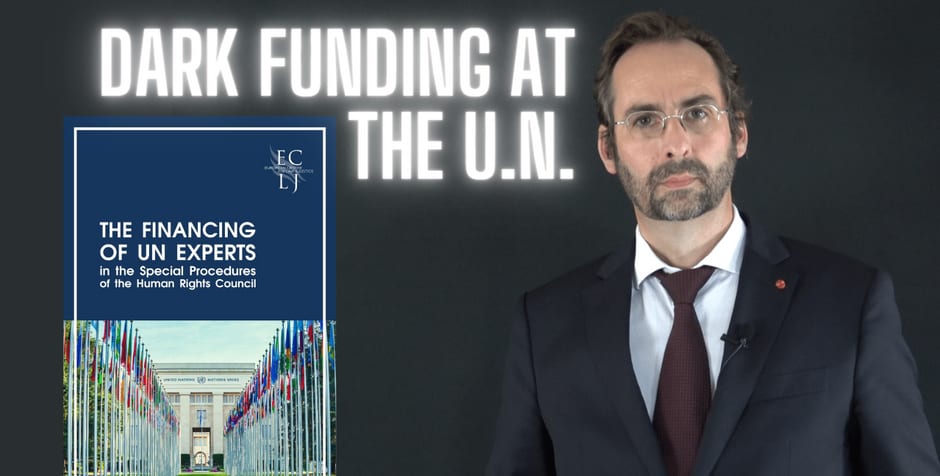 It is urgent to increase the financial transparency of the Special Procedures, to preserve their independence and the integrity of its system.

The report of the ECLJ on the Financing of UN experts has revealed serious issues with the funding that some UN experts directly receive from a number of States and private foundations.

Between 2015 and 2019, 15 States have paid 4 million dollars directly to 14 UN experts, and 37 UN experts have received 11 million dollars, mainly from the Ford foundation and the Open Society Foundations.

This money was not given through the U.N. but directly to Mandate holders, out of any control by the Office of the Hight Commissioner.

This is dark funding.

Even the contracts between Mandate holders and their direct funders remain secret. The European Commission, for example, refuses to disclose its contracts with Special Rapporteurs.

The ECLJ report demonstrated that this dark funding influences the agenda of Mandate holders. Some thematic reports submitted to the Human Rights Council were even commissioned and financed by private foundations.

Among the 28 Mandate Holders we interviewed, some of them used the term “corruption” to describe this phenomenon.

Such dark funding must end. It is urgent, for the sake of the system, to restore the independence of the Special Procedures from such illegitimate influence.

I thank you Mr. President.

Oral statement delivered on September 29, 2022, at the UN Human Rights Council during the general debate of the 51st session on Human rights bodies and mechanisms.