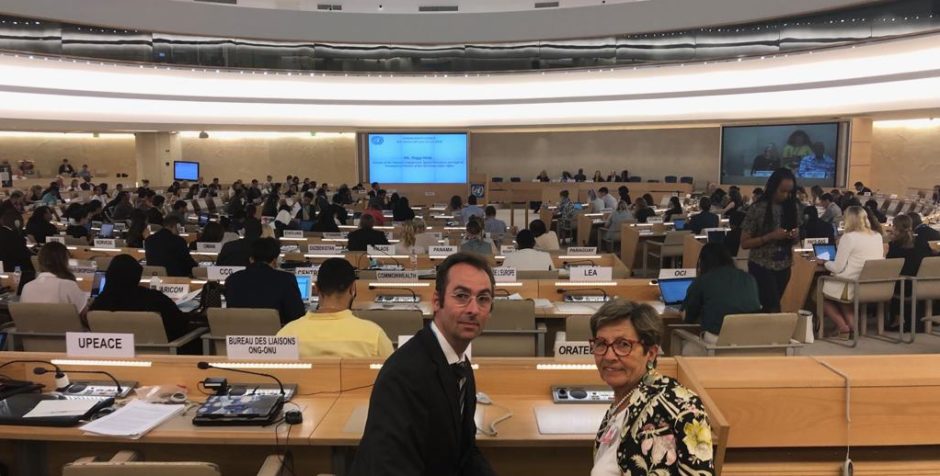 Viviane Lambert: At the Human Rights Council for her son Vincent

Viviane Lambert: Statement for her son

I am addressing you today with a plea for help.

My son could die in the near future, and you have the ability to save him.

Indeed, without your intervention my son, Vincent Lambert, will be euthanized by a doctor, because of his mental disability.

He is in a state of altered consciousness. He sleeps at night, wakes up in the morning, looks at me when I talk to him. The only form of external support he currently receives is a feeding tube. And this is what his doctor wants to take away from him, while juridical experts have stated that he is not the object of therapeutic obstinacy.

On the 19th of May, when his programmed death was scheduled to begin the next day, he cried when he saw us, we are still overwhelmed by this.

On two occasions, the Committee on the Rights of Persons with Disabilities asked France to not provoke Vincent’s death. But the French government refused the measures, and violates in a shameful fashion its obligations under international law.

This is why, in desperation, I am turning to you.

At present, only diplomatic pressure is capable of convincing the French government to respect its international obligations and the rights of my son.

I humbly beg you to remind France of its obligation to respect the interim measures prescribed by the Committee and not kill my son.

Besides my son, there are 1,700 other persons with the same disability whose lives are also threatened.

I am begging you, help us!

ECHR: abuses of euthanasia in BelgiumBy Priscille Kulczyk1563975655394
The European Court of Human Rights (ECHR) has agreed to consider the application introduced by a man whose mother was euthanized without him or his sister being informed. Priscille Kulczyk a Research...
Read More

Ten Answers about Vincent LambertBy Christophe Foltzenlogel1562319616902
The determination of Vincent Lambert’s parents towards their son’s life, despite his heavily disabled condition, arouses admiration but also a lot of misunderstanding and contempt. At a time when...
Read More
More Related Articles