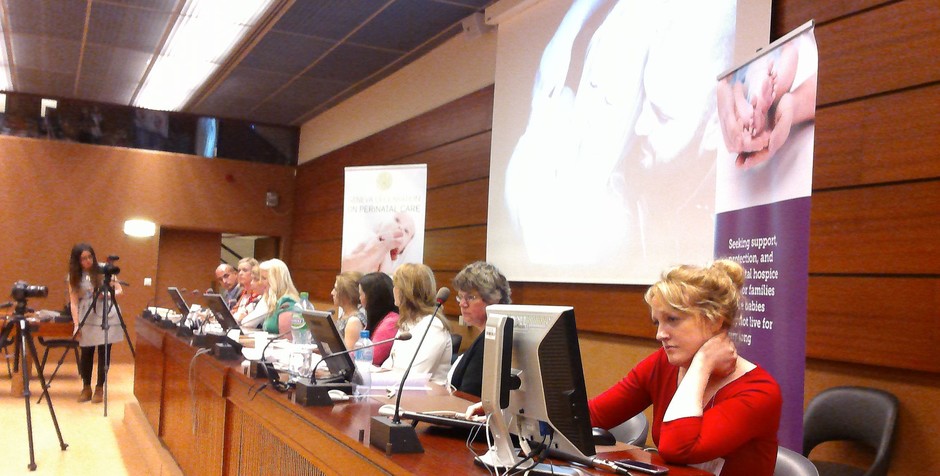 Launch of the « Geneva Declaration on Perinatal Care »

The European Centrefor Law and Justice hosted a public conference on March 11th at the United Nations, in Geneva, along with international medical experts and disability advocacy groups and parents of disabled babies  to launch the Geneva Declaration on Perinatal Care at the United Nations.

The Declaration, which is the centerpiece to a a global campaign to end disability discrimination caused by the  'incompatible with life' label, has already been signed by more than 200 medical practitioners and researchers and 27 disability and advocacy NGOs.  It aims to improve care for mother and baby where a life-limiting condition has been diagnosed before or after birth.

At the event, entitled 'Achieving excellence in Perinatal care; Babies with a illness and disability deserve better than abortion' families from Ireland, Northern Ireland, Canada, Spain, and Switzerland said that the label 'incompatible with life' was not a medical diagnosis and was causing “lethal discrimination against children diagnosed with severe disabilities, both before and after birth”.

The conference was addressed by Dr Ana Martin Ance an expert in perinatal hospice care, who said that, in her experience, families benefited hugely from supportive care which allowed them to spend time with their children, whose short lives had meaning and value.
Barbara Farlow, whose ground-breaking research led to a new understanding of the experiences of families where children had a life-limiting condition, said that the label 'incompatible with life' had been shown to lead to sub-optimal care after birth and that the phrase dehumanised children.

In a moving presentation, Grace Sharp, Derbhille McGill, Sarah Nugent and Sarah Hynes from Ireland spoke about the love and joy their children had brought to them in their short lives.

"My daughter, Lilly Joy, was alive and kicking inside of me and then she fought so hard to have four hours with us after birth before slipping peacefully away. All she knew was love," Grace Sharp told the conference.

They were joined by Spanish family Francisco Lancha & Macarena Mata who said the right to life of children with disabilities had been seriously eroded.

The Independent TD from Tipperary , Mattie Mc Grath, said that he was delighted to support the global campaign and welcomed news that politicians in Spain, the US and Northern Ireland had expressed support for the initiative.
Professor Giuseppe Benegiano , former director of special programmes for the UN WHO, said that the UN should give support for this important initiative against disability discrimation.

Prof Bogdan Chazan, an imminent obstetrician from Poland said that babies with a challenging diagnosis deserved better care than abortion.
Tracy Harkin of ELC launched the Declarationstates that: 'As medical practitioners and researchers, we declare that the term “incompatible with life” is not a medical diagnosis and should not be used when describing unborn children who may have a life-limiting condition'. It  also calls for better perinatal care for families.

The conference was included in the UN programme for the 28th Session of the Human Rights Council when the council dialogues with the Special Rapporteur on the rights of persons with disabilities. It was sponsored by the Irish-based organisation Every Life Counts, working with the International Trisomy Alliance and others. A written statement explaining the initiative was being circulated to every delegate at the UN session.

Ms Harkin said that the families wanted to challenge the United Nations to recognise the dignity and value of all children with terminal illness and disability.

The UN Convention states that 'States Parties shall take all necessary measures to ensure the full enjoyment by children with disabilities of all human rights and fundamental freedoms on an equal basis with other children'. The Preamble to the UN Convention on the Rights of the Child also states that a child 'needs special safeguards and care, including appropriate legal protection, before as well as after birth'.

"Yet studies show that up to 90% of children with disabilities are aborted before birth. In particular, children with life-limiting conditions are subject to discriminatory language and attitudes which deny them their humanity and their human rights. Families who are told that their baby may not live for long after birth need our full support and holistic perinatal care, but this can only be achieved if misleading and offensive language and attitudes are discontinued," said Ms Harkin.