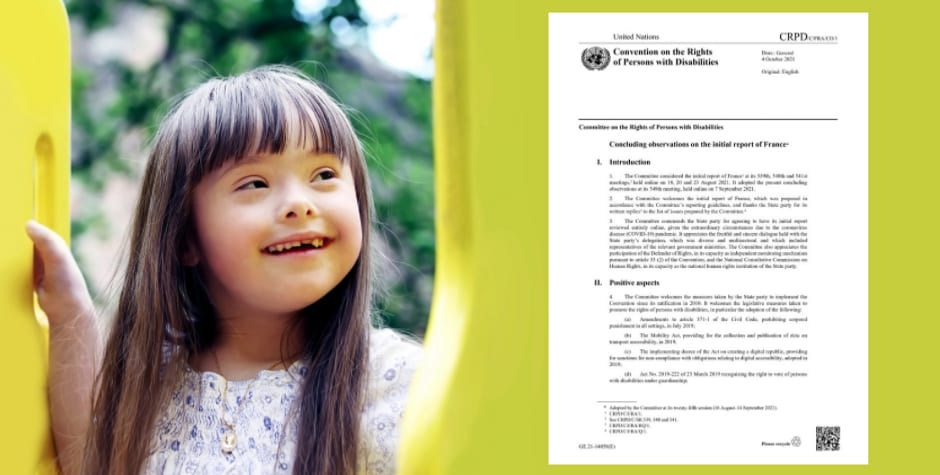 Among these recommendations addressed to France, one of them draws particular attention on this "World Abortion Day:" the Committee expresses its concern about "The devaluing of persons with disabilities through ableist policies and practices that underpin prenatal genetic screening on foetal impairment, particularly concerning trisomy 21, autism, and neonatal detection of deafness." It therefore recommend France to "Adopt and implement a strategy based on the human rights model of disability in order to eliminate negative stereotypes that devalue persons with disabilities, including in respect of the use of prenatal genetic testing."

This recommendation obviously points to the massive use of prenatal screening in France. Even though French law prohibits, in principle, "any eugenic practice tending to organize the selection of persons" (C. civ. Art. 16-4), a therapeutical abortion can nevertheless be carried out up to birth if two approved doctors consider that there is "a strong probability that the foetus is affected by a particularly serious condition recognized as incurable at the time of diagnosis" (Art. L. 2213-1 CSP). This leads in particular to the elimination of most foetuses diagnosed with Down Syndrome.

The recommendation addressed to France is not isolated: it results from the position of principle adopted by the CRPD against eugenic abortion. This Committee considers that "Laws which explicitly allow for abortion on grounds of impairment violate the Convention on the Rights of Persons with Disabilities (Art,. 4,5,8)," particularly because this type of abortion " perpetuates notions of stereotyping disability as incompatible with a good life" (2018). For the Committee - which is composed of a majority of people with disabilities - eugenic abortion is itself a discrimination that stigmatizes people with disabilities.

This recommendation against France is not a first. Since 2011, this Committee has already ruled regarding Spain, Austria and Hungary that foetal disability should not be the subject of a specific abortion regime, particularly with regard to the legal time limit which, in some countries, can be very late in case of disability. The Committee also recommended that the United Kingdom "amend its abortion law accordingly," finding that "Women’s rights to reproductive and sexual autonomy should be respected without legalizing selective abortion on the ground of fetal deficiency" (2017).

Even more explicitly, the UN Special Rapporteur on the Rights of Persons with Disabilities, Ms. Catalina Devandas Aguilar, denounced in her 2020 report to the Human Rights Council the ideology that there are "Lives not worth living," echoing the title of Binding and Hoche's famous 1920 book that founded Nazi eugenics policy. Ms. Devandas Aguilar herself has spina bifida, a major cause for abortion. For the UN expert "When discussing issues such as prenatal testing, selective abortion and pre-implantation genetic diagnosis, there is a shared concern among disability rights activists that bioethical analyses are often used to give an ethical justification to a new form of eugenics, often referred to as “liberal” eugenics." She goes on to stress that it is "important that balanced and accurate information is provided, not just about the risks and limitations of prenatal tests, but also about life with the condition that is being screened for, in order to create a process for prospective parents to confront any personal or societal bias to which they may have been exposed."

In fact, Ms. Devandas Aguilar and the Committee are trying to defend the right of disabled people to exist on an equal footing with able-bodied people. They see that eugenic abortion stigmatizes them and denies them their dignity. But this position is out of step with Western society. In order to defend their cause, without offending feminists, disabled people only ask that disability no longer be a specific -stigmatizing- reason for abortion.

It is precisely on this question that the European Court of Human Rights will have to decide soon, following the recent suppression of eugenic abortion by Poland. Several women have complained to the Strasbourg Court about the impossibility of having an abortion if, once pregnant, their children were found to be disabled.

The subject is therefore not closed. One thing is certain, however: the question of the "right to abortion" generates not only opposition, but also a series of contradictions within human rights themselves, between the competing rights of the "unborn," of women, of disabled persons and of the medical professions.