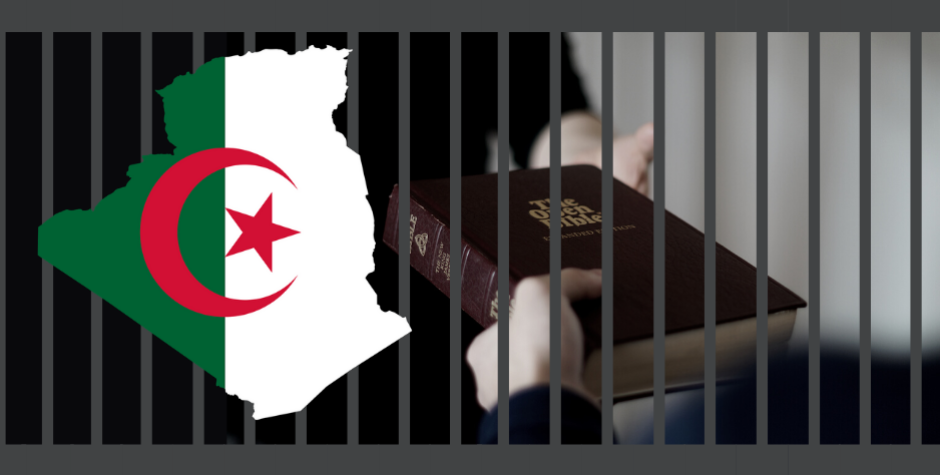 Algeria: In Prison for Proselytising

On March 4, 2021, Rachid Seighir, pastor of the Oratory Church in Oran, and Nouh Hamimi, a former salesman in the books and stationery shop run by the pastor, were found guilty of proselytizing.[1] They were sentenced in absentia to two years in prison and a fine of 500,000 Algerian dinars (about €3,100), which they learned from a notice slipped under their church door.

According to the judgment, they were accused of having "distributed publications or any other propaganda that undermines the faith of a Muslim": in 2017, Christian literature and Bibles had been found in this bookstore during a search. However, Article 11-2 of Ordinance 06-03 of February 28, 2006 establishing the conditions and rules of exercise of worship other than Muslim,[2] on the basis of which the two men were convicted, provides that "Without prejudice to more serious penalties, is punished by imprisonment for two years to five years and a fine of 500,000 DA to 1,000,000 DA whoever: (...) 2 - manufactures, stores, or distributes printed materials or audiovisual footage or by any other medium or means that aim to undermine the faith of a Muslim". This ordinance has been described as "liberticide" by Salaheddine Chalah, president of the Algerian Protestant Church (EPA).[3]

For Pastor Seighir, this conviction is only the continuation of a previous case involving his bookstore: in 2008, he had already been convicted for such facts before being released on appeal. Following the search in 2017, the store had been closed by order of the Wali (Governor) of Oran. In 2018, however, a court had declared this closure invalid on procedural grounds, but the authorities refused to allow the bookstore to reopen. In 2019, the administrative justice had ordered the removal of the seals and the reopening of the store, but again, the authorities did not respect this judgment: the business is therefore still currently closed.

Although Christianity has been present in Algeria since the second century, the state religion today is Islam and more than 98% of the population is Muslim.[4] Indeed, the Arab-Muslim conquests of the eighth century virtually wiped-out Christianity before a brief return in the fifteenth century thanks to the Spaniards, quickly replaced by the Ottomans. Today, Christians represent 0.3% of the Algerian population. They live mainly in Kabylia and are mainly Muslim converts, mostly Protestants.

The fact that apostasy is forbidden in Islam may thus explain the unfortunately frequent vexations to which Christians, especially Protestants, are subjected in the native land of Saint Augustine. The present case comes two months after several Christians were found guilty of blasphemy, one of them having been sentenced to five years in prison and a fine of 100,000 dinars for having shared on social networks a caricature of Muhammad that he had received.[5] On the other hand, while the Algerian government has loosened measures against the COVID-19 including about the closure of places of worship, which were officially allowed to reopen in August 2020 except for Protestant churches.[6] In any case, between July 2018 and October 2019, the EPA has seen thirteen of its places of worship sealed by the authorities, including the two largest churches in the country, namely that of the Full Gospel in Tizi Ouzou and that of the Spring of Life in Makouda in October 2019.

The situation of Christians in Algeria has deteriorated significantly in recent years, as shown by the World Index of Persecution of Christians established by the NGO Open Doors: in 2021, Algeria was ranked 24th,[8] while it was 42nd in 2018. Similarly, the 2020 report on the world's worst religious freedom violations, written by the US Commission on International Religious Freedom (USCIRF), mentions Algeria for the first time as "[having] systematically repressed the evangelical Protestant community."[9]