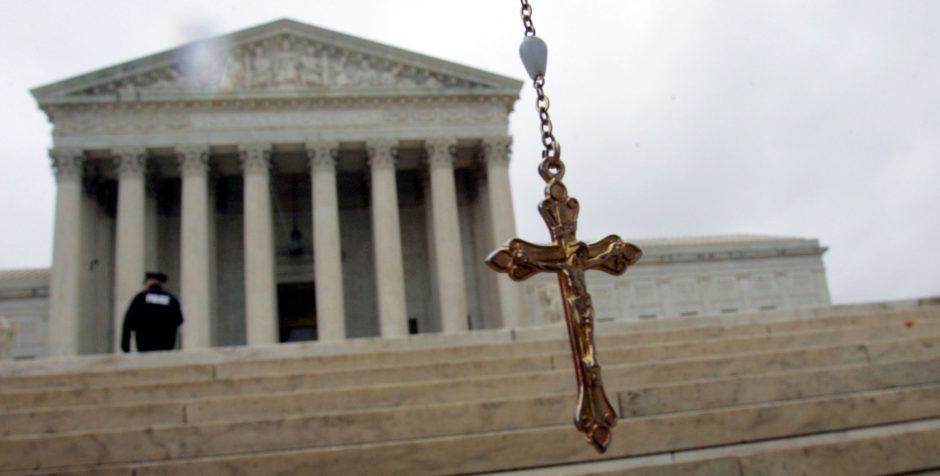 The US Supreme Court ruled in favour of the baker who refused to prepare a wedding cake for a same-sex marriage. Grégor Puppinck decrypts this ruling and considers that freedom of conscience is the “spare wheel” of a liberal society.

FIGAROVOX.- What are the consequences of the decision taken by the US Supreme Court?

Grégor PUPPINCK.- Even when one knows about the importance of the “wedding cake” in an American wedding, this case looks like a bizarre joke! To prepare a wedding for the party of a “homosexual wedding” is but a far cooperation to that wedding. A baker yet refused to create a wedding cake, invoking the respect to his freedom of expression and of religious and moral convictions. The male partners took him to court for six years because of that.

In fact, this legal battle is symptomatic of the difficulties caused by the increasing pluralism of Western societies where “new rights” are coming up against the old ones. It is difficult to make LGBT activists coexist with people who believe that homosexuality is sinful. The Supreme Court ruled in favour of the baker, asserting the protection of “religious and philosophical objections to gay marriage”. It is therefore a victory for freedom of conscience.

However, this decision have a limited scope, as US judges ruled on a side aspect of the case, reckoning that the Colorado authorities had shown an “obvious and unacceptable animosity” against the Christian faith of the baker, whose convictions were called “despicable rhetoric”.

You have been working for several years to defend the right to conscientious objection before the ECHR. Do you think that the American decision can influence the European judge?

The Supreme Court has indeed a strong influence on the ECHR. The major international jurisdictions try to be in unison. They communicate with each other, informally, to avoid to contradict one another on the same subject.

As regards same-sex marriage, the Supreme Court has perhaps even been influenced by the ECHR, when recognizing as soon as 2013 the principle of the right to conscientious objection. In the coming months or years, the ECHR and the UN Human Rights Committee will decide on the case of French mayors who dispute the absolute nature of the obligation to perform marriages between same-sex persons. Unlike the American baker, these elected officials participate directly in the marriage, the justification for their objection is hence stronger.

We are not unconscious defenders of this right, but seek to define it strictly to better defend it. We worked with the ECHR on cases of objection to military service, hunting, abortion or vaccines.

You also defend freedom of conscience for pharmacists…

A French pharmacist was recently convicted for refusing to deliver an IUD to an activist of Family Planning who had come to test him. He asked us to help him and will soon file a request to the ECHR. We believe that the punishment he endured was not necessary, and therefore violated his freedom of conscience.

It is far from being an isolated case: we will broadcast on the occasion of the request many testimonies of French pharmacists who have been dismissed from or forced to abandon their profession by loyalty to their convictions. A young woman told us she had changed the path of her studies after six years, to avoid the violation of her conscience: “because the morning-after pill [...] will prevent implantation, I believe I cannot prevent this little being from living; selling the morning-after pill will make me take part to the interruption of his life, so in conscience I cannot.” All her colleagues who did not want to sell the morning-after pill left, she said, “because in practice it is not possible [to refuse to sell it]”.

We also denounce the inconsistency of French law which recognizes the right to conscientious objection to all medical professions except pharmacists, even though they are nowadays at the forefront regarding the delivery of abortive products, and tomorrow may be euthanasic. As explained by a pharmacist woman, this reveals a real contempt for this profession: “you are just there to sell the boxes, be silent and do what you are told to do”. Yet, pharmacists must have a caring and counselling role: “Some girls came to thank me and said, ‘the fact that you refused the sale allowed me to see things differently and to mature my decision’.”

What exactly is the recognition of a right to conscientious objection? Does this mean that members of certain communities can escape common law, or at least certain rules, in the name of their conscience? May the individual conscience be above the law?

The recognition of the right to conscientious objection is recent, it goes with the development of liberal society and its disconnection between law and morality. Before, conscientious objection was conceived only as a duty to resist seriously unjust orders. Thus the ECHR validated the conviction of Soviet officials for executing such orders. In these cases, the Strasbourg Court, following the Nuremberg trials, clearly recognized that personal conscience is always above positive laws: it must judge them, and possibly refuse to conform to them.

This differs in liberal societies where the assertion of the principle of tolerance makes two levels of morality - public and private – coexist, leading society on the one hand to decriminalize private “immoral” practices, and on the other hand individuals to socially tolerate practices that they privately condemn. Yet, if this tolerance is trouble-free for the majority of citizens, it is not so for the minority directly concerned by the carrying out of the practice in question; because, to use a concrete example, it is one thing to tolerate euthanasia, but it is another to have to practice it oneself. If it is possible to make two moralities coexist within a society, it is not possible within a single person.

Thus, the liberty which liberal society gives to individuals regarding practices morally debated and which have often been prohibited for a long time can only be equitable if it guarantees to those who morally reprobate them the right not to be compelled to take part in it. The conscience clause guarantees precisely this right, it is a mechanism by which the liberal society organizes the coexistence of the two levels of morality; it avoids the “dictatorship of the majority” and tolerance to become itself intolerant by condemning citizens stuck by their professional situation between the two levels of morality.

This risk exists. Moreover, the increasing pluralism of society reveals that the right to conscientious objection, as a liberal notion imbued with relativism and subjectivism, is in fact impracticable. There is a risk that, overwhelmed by various claims of objections, the judges will deny them all in the name of equality before the positive law, thus reducing to nothing the guarantee of freedom of conscience and religion. A clarification of the concept of conscientious objection is therefore necessary, not to extend its scope to the point of making it indefensible, but on the contrary to better define it so that the right to objection can be guaranteed in a fair measure. This is the purpose of the study I published in 2016 to release criteria to extract freedom of conscience from liberal relativism and thus save this right, because conscience remains the ultimate witness of justice.

A first criterion lies in the very definition of the objection, but is generally ignored. It is based on the distinction between action and abstention. Conscientious objection only concerns situations in which a person is compelled to perform an act proscribed by his conscience (an evil), and not that in which a person is prevented from performing an act prescribed by his conscience (a good). This distinction is essential. Thus, one cannot invoke the right to conscientious objection against being prevented from wearing the burqa, but only against being forced to wear it. This distinction rests on the dissymmetry between good and evil, since doing good is a question of proportion - it must be modulated according to circumstances - while avoiding evil is a question of principle, whatever the circumstances. The case where a person is prevented from realizing all or part of a good prescribed by his conscience (the case of Antigone) falls within the ordinary regime of the limitation of the manifestation of convictions.

The second criterion lies in the distinction between faith and reason, between religion and morality, and consequently between objections, according to whether they are based on a religious or a moral conviction. The difference between moral and religious objection is that the former can claim to be objectively right: its claim is about justice. For example, it is unjust to kill an innocent being ... On the contrary, a strictly religious objection cannot claim to be just per se, for example, working on Sunday is not unjust in itself, it is impius. The claim of a religious objection is then not about justice, but about the liberty of the person to conform to his religious convictions.

As a result, denying a religious objection is not necessarily an injustice per se. Differently, faced with a real moral objection, the authorities cannot ignore it without committing an injustice. The difficulty, of course, is to recognize a real moral objection. In practice, such an objection is recognizable in that it is aimed at respecting a fundamental right or freedom and opposes an order derogating from it. This is particularly the case with abortion or euthanasia, the practice of which is only possible by way of derogation from respect for life. A complementary Kantian criterion is to ask whether the objection in question can be made universal.

Finally, conscientious objection reminds us that justice is situated beyond positive law and that this is the whole difficulty. Its practice is a warning signal for the whole society. If many people refuse to practice an act, the public authorities should not try to force them into it, but rather question the causes of the refusal, because it is not the law, but the personal conscience that is the ultimate judge and witness of justice.

The Neuwirth Law judged by History