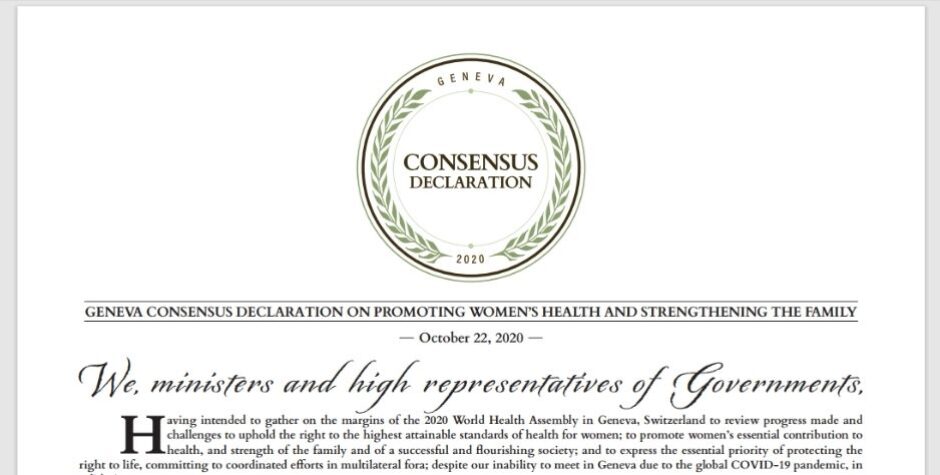 On October 22, 2020, 35 States signed the Geneva Consensus Declaration on Promoting Women's Health and Strengthening Families (see below). These States from all regions of the world were brought together at the initiative of the United States in the wings of the World Health Assembly in Geneva (WHO). Based on international law, the Declaration recalls, inter alia, that the right to life is inherent to the human person,[1] that children need special protection before birth[2] and that “[abortion] in no case should be promoted as a method of family planning.”[3]

The list of signatories to this text has been growing steadily since October and represents 20% of the world's population. It includes three countries of the Council of Europe (Poland, Hungary and Georgia), many African States, the Arab States of the Gulf, Brazil, Paraguay, Belarus, Indonesia and Nauru (Oceania). This alliance of very diverse states is exceptional in geopolitical terms. Some signatory states are in fact strongly divided among themselves on other subjects. This is the case, for example, of the United States and Pakistan, Sudan and Southern Sudan, or Saudi Arabia and Qatar.

This Joint Declaration has been possible thanks to its preparation since 2016. As of September 2019, 19 states had already joined together to deny the existence of any right to abortion under international law or any obligation on states to facilitate or fund abortions. Such declaration is necessary, in order to counter the activism of pro-abortion NGOs and members of international organisations that are constantly trying to create a “human right to abortion”.

The current alliance of 35 states is promising and should be strengthened and have lasting influence at the United Nations.

This article can be read in full on Aleteia (in French only).

We, ministers and high representatives of Governments,

Having intended to gather on the margins of the 2020 World Health Assembly in Geneva, Switzerland to review progress made and challenges to uphold the right to the highest attainable standards of health for women; to promote women’s essential contribution to health, and strength of the family and of a successful and flourishing society; and to express the essential priority of protecting the right to life, committing to coordinated efforts in multilateral fora; despite our inability to meet in Geneva due to the global COVID-19 pandemic, in solidarity, we

Furthermore, we, the representatives of our sovereign nations do hereby declare in mutual friendship and respect, our commitment to work together to:

[1] Preamble of the 1948 Universal Declaration of Human Rights.