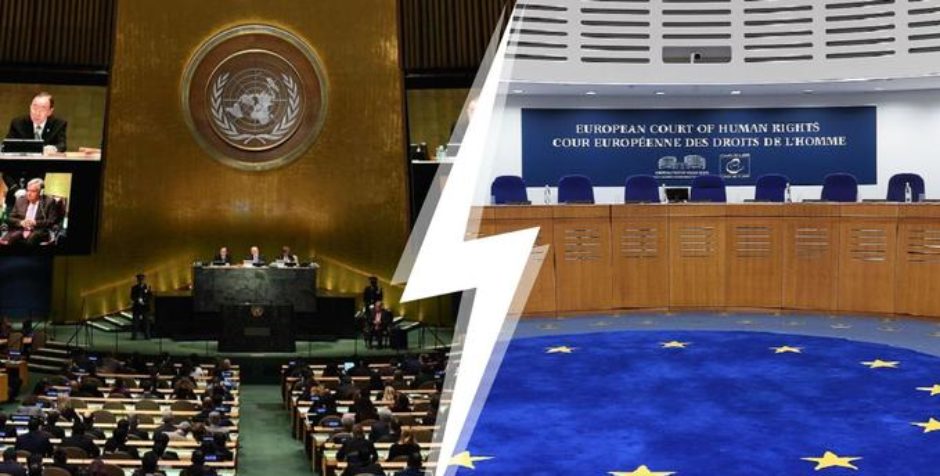 Prohibition of the burka: tussle between the UN and the ECHR

This article was published on le FigaroVox on 23/10/18

FIGAROVOX/TRIBUNE - The UN Human Rights Committee has condemned the 2010 “law on the niqab”, which the judges of the ECHR had however approved. Nicolas Bauer denounces the complaisance of the United Nations towards Islam.

The UN Human Rights Committee has ruled in favor of two Muslim women accusing France of violating their right to freedom of religion with the 2010 law banning the wearing of niqab in the public space. This opinion of the UN Committee, enforceable but not binding, consciously opposes the European Court of Human Rights (ECHR). Despite the criticisms that can usually be made to the judges of Strasbourg, they have indeed had the merit of approving the French legislation on the full veil.

This is not the first time that these two institutions of protection of human rights reveal their deep disagreement on the wearing of religious signs and clothing. Academics even call this opposition “a tussle”. For example, a few years ago both the ECHR and the Human Rights Committee discussed the issue of banning the wearing of the Sikh turban on identity photographs affixed to French administrative documents. While the Strasbourg judges had ruled in favor of France, the Geneva “experts” considered that the freedom of religion of the Sikh community had been violated. Similar disputes have also led the two bodies to assess French legislation prohibiting the wearing of visible religious symbols in public schools. Here again, the Committee asked France to “review”, in the light of Human Rights, the law of 15 March 2004 validated four years earlier by the ECHR. In its recent remarks on the Baby Loup case, the UN Committee even denied the authority of the Strasbourg judges, expressly disregarding their appreciation of the meaning of the Islamic veil.

The Committee - and more generally the UN - is subject to strong religious pressure.

More generally, the Committee has classified the French restrictions on the wearing of religious symbols considered visible among its “main subjects of concern and recommendations”. Why this complaisance towards the visible manifestations of Islam? Let us first recall that the Committee - and more generally the UN - is subject to strong religious pressure. Admittedly, it is composed of "independent experts" receiving in principle no State instructions. But they are heirs to national and religious traditions that have a strong and inevitable impact on their conception of religious freedom. In particular, almost 30% of the experts come from Member States of the Organization of Islamic Cooperation (OIC), which signed and ratified the Cairo Declaration of Human Rights in Islam (5 August 1990). This legal formulation of sharia rejects freedom of religion and states that “Islam is the natural religion of man”. In addition, Asian States, also influential in the UN, examine freedom of religion in the light of the practices of their populations, often involving the wearing of traditional religious clothing.

On the contrary, the Strasbourg judges are more courageous on issues related to Islam. The ECHR takes into account the history and reality of the European civilization and does not seek to apply an abstract and universal vision of the Human Rights. Even when one speaks of “United Nations”, the Human Rights Committee should not judge wearing the niqab in the same way in France and Saudi Arabia!

For these reasons, Muslims who oppose French laws appeal to the Committee and not to the ECHR. Thus, while the lawyers of the veiled employee of the Baby Loup nursery had initially indicated their intention to seize the Court of Strasbourg, they finally privileged the Committee, considered as “less directly effective but more constant in its decisions than the European Court of Human Rights, which tends to leave States a wide margin of appreciation” (Mr Henry). This time, the two women who were fined for wearing the niqab also went to Geneva for support. If the Committee does not have as much weight as the ECHR, an opinion of the Geneva experts still has a real legal and political impact. This body has indeed acquired an essential importance in international law and tends to become a quasi-jurisdiction. So much so that, still in the Baby Loup case, the first president of the Court of Cassation Bertrand Louvel announced in September 2018 his intention to “take into account this divergent interpretation of the law”. As far as the wearing of the niqab in the public space is concerned, it is therefore possible that the interpretation of the 2010 law will also be loosened...

The Human Rights Committee should not judge wearing the niqab in the same way in France and Saudi Arabia!

In reality, it is most likely that France will refuse to modify its legislation on the niqab and invoke to justify this choice the jurisprudence of the ECHR. This was the strategy of the Minister of Foreign Affairs in the cases previously cited on identity photos and public schools. They had then reminded the UN experts that the French legislation had been “judged to be in conformity with the European system for the protection of Human Rights by the European Court of Human Rights”. This statement shows how the deep divergence between Strasbourg and Geneva on religious symbols can be exploited by States according to their interests and undermine the authority of both bodies. This is the whole system of international protection of Human Rights that is weakened by the ideological “tussle” between the ECHR and the UN.

Because the concern is ideological indeed. What are opposed are, on the one hand, secularism and “neutrality”, which tend to be sanctified by the ECHR, and on the other, Islam, whose pressures are felt at the UN. While international Human Rights standards should be close, the ECHR and the UN view freedom of religion as a tool for diverging goals. For the ECHR, the central issue is to determine whether a religious sign or garment can be reconciled with tolerance, non-discrimination and gender equality. For the United Nations, it is important to uphold these principles between religions, even if it is to the detriment of gender equality. This ideological confrontation tends to reduce human rights to an ideological battlefield, the ground on which the wrestling civilisations fight.

Above all, the application to the religions of the principle of non-discrimination is dangerous for the Western civilization. This tends to equalise religions that have absolutely not the same relationship with human dignity, especially regarding the respect of women. In this context of divisions, undermining international bodies, France is the only one to be legitimate to determine the place it wants to grant to Islam, according to its history and culture.