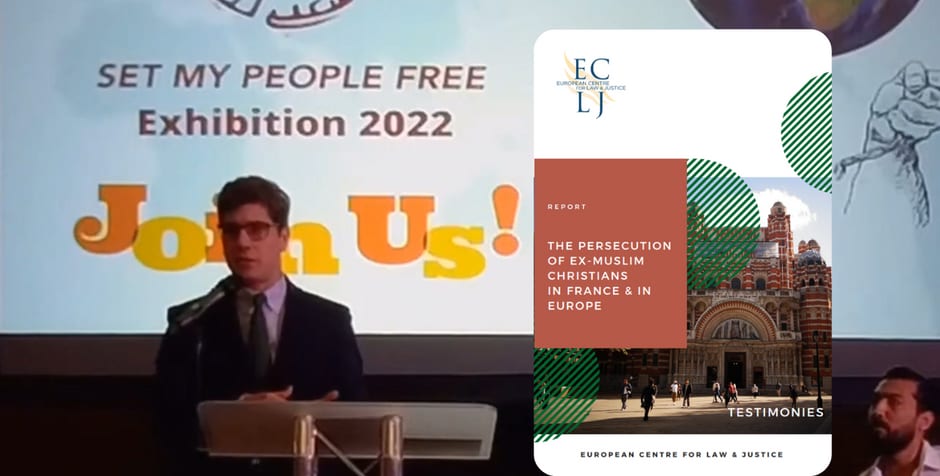 On July, 5-6, 2022, the UK government hosted a human rights conference to urge increased global action on Freedom of Religion or Belief (FoRB) for all.

The conference brought together governments, parliamentarians, faith and belief representatives, and civil society.

The ECLJ was invited to speak at a key event in London’s Emmanuel Center: “No Penalty for Apostasy & Blasphemy” along with Swedish Ambassador Ulrika Sundberg, Special Envoy for interreligious and intercultural dialogue, and UN Special Rapporteur on Freedom of Religion or Belief, Ahmed Shaheed.

Following the presentations of Sundberg and Shaheed as well as many witnesses who had endured the effects of blasphemy laws in Yemen, Pakistan, Iran, Sudan, and other countries, the ECLJ presented its new report: the persecution of Ex-Muslim Christians in France and in Europe.

Even though Sharia Law is not enforced in Europe as it is in many Muslim countries, the growing presence of important Muslim communities in major European cities poses a threat to the religious freedom of those seeking to leave Islam.

As detailed in our report, converts from Islam face both family and community pressure. They are perceived as traitors, and the persecutions that they endure vary greatly. The overwhelming majority will be criticized and insulted by their families and relatives. But it doesn’t stop there. In many cases, converts from Islam endure threats, harassment, and even physical assault. In some rare cases, the persecution escalates into physical beatings, some of which prove fatal.

The novelty of our report is that we have not only collected many testimonies from French people, but also other testimonies from people living in Belgium, England, Austria, and other countries. One witness, Nissar Hussain, was present at the event and attested to the sad reality of persecution in Europe. Hussain, a British subject with Pakistani origin, converted from Islam to Christianity and suffered harassment for years. In 2017, while walking to his car, Hussain was viciously attacked by two Muslims with baseball bats. He was knocked to the floor and beaten a dozen times. A surveillance camera captured the display of aggression, and it was shown to those in attendance.

As our report demonstrates, this level of aggression against converts from Islam is not that rare. Many converts, or “apostates” as they are called, run away from home for fear of being assaulted.

The major reason we developed this report was to raise the awareness of the UN Special Rapporteur and civil society about this growing issue. Europe cannot turn a blind eye to these breaches of religious freedom, a principle that it claims to defend so vigorously. It is of the utmost urgency that States take these persecutions into account, that they adapt their criminal responses to it, and that church leaders pay more attention to the special needs of these converts who join them.

Here is the video of the presentation of our new report and the link to read it:

Improving the impartiality of the European Court