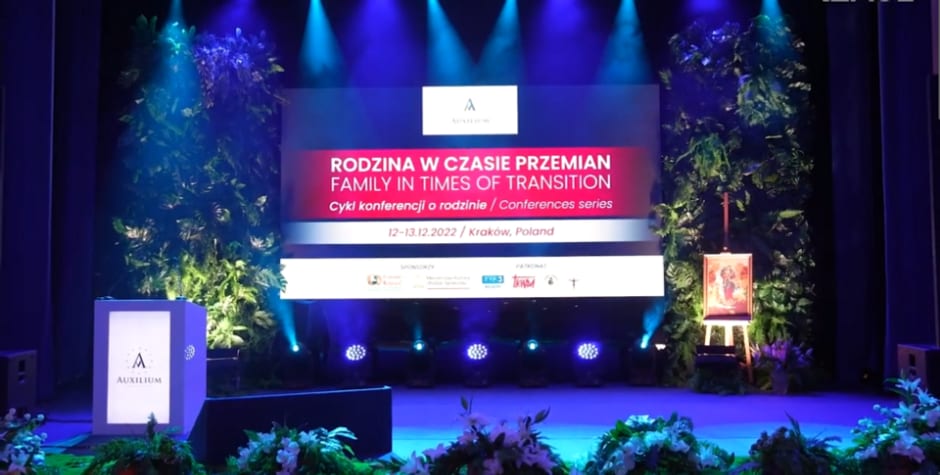 On 12 December 2022, the European Center for Law and Justice (ECLJ) was invited to participate in an international conference entitled “Family in Times of Transition”. It was held at the Shrine of Divine Mercy in Krakow, Poland, and was organized by the Auxilium Foundation from the Diocese of Tarnów.

This conference allowed for an interdisciplinary exchange of knowledge and experience on the theme of family, at a time when it is undergoing profound socio-economic changes. Jennifer Roback Morse, (Ruth Institute), Robert Sirico (Acton Institute), Francisco Contreras (University of Seville - Spain) and Marcin Rzegocki (Fundacja Auxilium) made presentations.

For the ECLJ, Priscille Kulczyk intervened on “Consequences of Pornography on Families”: an article written for this conference and exposing the details of this issue appears below.

Addressing this topic is essential in the context of such a conference: indeed, families are endangered in the current “pornographic consumer society” which is due to the advent of the digital era and to the pandemic that has aggravated the phenomenon. It is enough to recall that an estimated 50% of internet traffic is sex-related and that more than a quarter of the world’s video web traffic involves pornography.

It was therefore important, on the one hand, to alert on the fact that children and couples are affected by the serious consequences of this massive consumption of pornography. This is harmful for any person, but young people are particularly vulnerable to exposure to such content, which is increasingly early and intensive, partly because of the use of smartphones: in Poland, a 2022 study revealed that the average first viewing of pornography takes place just before the age of 11 and that nearly one in four 16-year-olds who watch porn admits doing so daily. With the proven risks of addiction, psychological and relational difficulties, and harmful sexual behavior, the toll on young people is heavy. When pornography interferes into couples, it leads overall to less relational and sexual satisfaction between spouses and a link between pornography and domestic violence is also established. Many families are even destroyed by it: according to a 2016 study, the probability of divorce doubles for men and women who watch pornography.

Having made this alarming observation, it is urgent to react in order to protect families against this scourge. This conference was thus, on the other hand, an opportunity to raise awareness among the public, particularly among the policy-makers present, about the existence of concrete solutions having European and international legal bases. This involves prevention and awareness-raising policies, in particular understanding pornography as a public health problem and offering young people quality education on this subject. It is still essential to regulate pornographic supply and access to pornography, for example by placing a warning message on pornographic material, by imposing the default activation of a parental control or filtering software on devices connected to the Internet, by regulating policies for moderating and reporting harmful content, by requiring pornographic sites to verify the age of their users, or even by banning pornography.

Improving the impartiality of the European Court