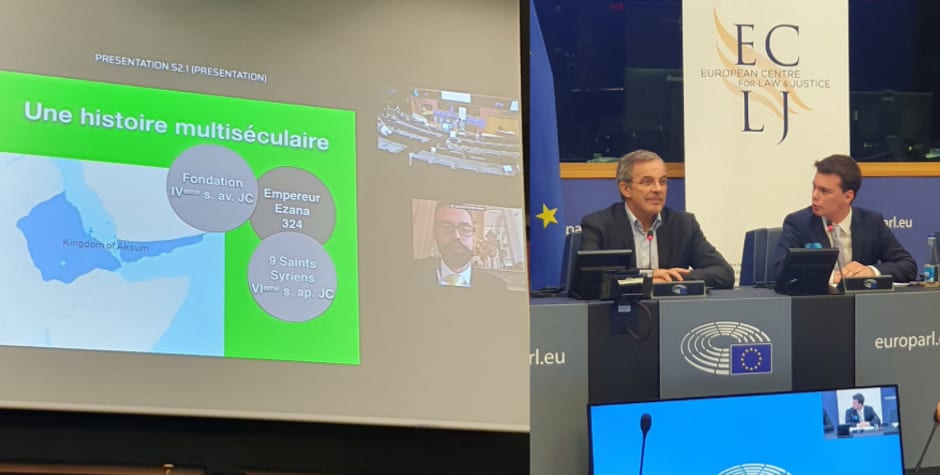 Conference on Tigray War in Ethiopia

On Wednesday, October 6, the ECLJ held a conference at the European Parliament with the Intergroup "Christians of the East", on the war in Tigray, Ethiopia, at the initiative of MEP Mariani.

On March 4, 2021, the United Nations High Commissioner for Human Rights, Michelle Bachelet, called for an independent investigation into possible "war crimes and crimes against humanity" committed in Ethiopia in the regional state of Tigray,[1] where more than 90% of the population is Christian, mainly Orthodox. These crimes were committed in the context of the civil war that broke out in Ethiopia in November 2020, between the Ethiopian National Defense Forces (ENDF) and the Tigrayan Defense Forces (TDF). According to USAID estimations in May 2021, 5.2 million people were in need of humanitarian assistance out of an estimated total population of 6 million. 350,000 people are also at risk of starvation and this number is growing. UNICEF also warned at the end of June 2021 that at least 33,000 severely malnourished children in hard-to-reach areas were at imminent risk of death if emergency aid be not delivered quickly.[2]

The European Centre for Law and Justice (ECLJ) is committed to defending the right to religious freedom in France, Europe and throughout the world and regularly intervenes in this capacity at the United Nations Human Rights Council to defend persecuted Christians. This commitment is the reason why the ECLJ expresses serious concerns in two ways about the war in Tigray, Ethiopia. Firstly, because of the humanitarian consequences of the civil war for all the people in the area. Secondly, because of the religious dimension of the conflict, even if this is not the cause or the motive of the conflict, in fact, religious people are victims of this war and holy places are targeted.

To testify to this and to analyze the facts, three speakers of quality intervened. First of all, Philippe Pellet, as a member of the Institute for Research on Religion and Society in Budapest and involved in the Hungarian humanitarian aid program "Hungary Helps." He spoke about the complex and chaotic situation in Tigray. Then, Henri Adam de Villiers, a specialist in Eastern liturgies and Ethiopian heritage as well as in the history of Eastern Christianity, spoke about the very rich Christian heritage of Ethiopia which is threatened by war. Finally, Benjamin Blanchard, co-founder and executive director of SOS Chrétiens d'Orient, spoke about the critical situation of Christians today in this country.

ECLJ supports all the victims of this war and is particularly concerned for the populations threatened by famine and in particular the tens of thousands of severely malnourished children in the hard-to-reach areas. ECLJ calls on all stakeholders to urgently address this humanitarian issue and to provide a strong and rapid response in order to avoid further tragedies.