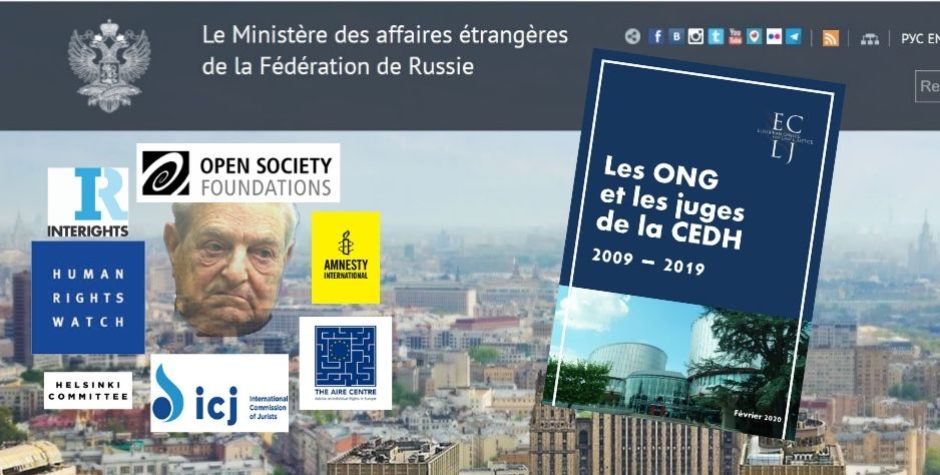 Conflicts of interests at the ECHR: Russia Comes into Play

Over two months after the publication of the Report by the European Centre for Law and Justice (ECLJ), new voices are being raised every day to denounce conflicts of interest between judges of the European Court of Human Rights (ECHR) and NGOs funded by George Soros, including the rich and highly controversial Open Society. As a reminder, this report revealed that 18 judges ruled 88 times in cases brought or supported by these NGOs of which they had previously been collaborators or leaders, in serious violation of judicial ethics. In any State under the rule of law, the perpetrator of such breaches would face severe disciplinary sanctions, and the cases in question would have to be retried.

Far from falling back into silence, and despite the confinement, the revelations made in this report have so far continued to spread throughout Europe, and even beyond, through hundreds of publications. We know that the ECHR, unable to contest the facts, has decided not to respond to them. Worse, the most controversial judge, Bulgarian Yonko Grozev, was elected on 24 April to the important post of "section president".

But it now seems that the ECHR will not be able to remain permanently silent.

Indeed, one of the last voices to have risen to denounce this situation was none other than that of the Russian Ministry of Foreign Affairs, which devoted an official Press release to the ECLJ report. In this text, it expresses concern about the “implicit and explicit influence on the ECHR” exerted by “major Western human rights NGOs” and states that this facts "directly affect the quality, impartiality and fairness of the court rulings.” Russia furthermore declares that "due consideration by all parties of the existing shortcomings in the ECHR activities during the reform [i.e. the current reform process of the ECHR] will make it possible to adjust and ultimately minimise the “political” side effects involved in its practice”.

This statement is far-reaching in view of Russia's diplomatic weight in Strasbourg. Its ambassador will certainly implement it firmly with the representatives of the 46 other Council of Europe member States. No doubt he will be supported in this by other governments, particularly in central Europe, which also complain about the political influence of these same NGOs in their own countries. The Bulgarian Minister of Justice has already made a statement in that respect.

It will not even be necessary for Russia to request the inclusion of this subject on the agenda of the Committee of Ministers (where the 47 ambassadors are negotiating), since the Committee of Ministers has already been asked to answer three written questions from members of the Parliamentary Assembly of the Council of Europe on this issue. The debate will therefore take place and - hopefully - without any false pretence, as the Committee of Ministers is the only body to exercise a certain power over the Court. In response to these questions, European governments will have to agree on the measures to be taken in order to “restore the integrity of the European Court”, “put an end to “the systemic problem of conflicts of interests between NGOs and judges” and ensure the transparency of the action of these NGOs before the Court.

The Parliamentary Assembly of the Council of Europe - which elects the ECHR judges - will also be seized of the issue by a petition initiated by the ECLJ, following the official procedure allowing any person to request the inclusion of a subject on its agenda.

Finally, members of the Parliamentary Assembly have already expressed their intention to initiate the drafting of a parliamentary report in order to adopt a recommendation, which will involve an inquiry and hearings of representatives of the Court.

Ultimately, measures will have to be taken by the ECHR to remedy the situation, starting with the application to itself of the ethical rules it imposes on national courts. Precise measures have been identified and supported by some 130 lawyers in a recent appeal for the independence and impartiality of the ECHR.

The ECHR will only be able to regain authority if it restores its integrity.

(Translation from a French article published in Valeurs Actuelles, 11 May 2020)