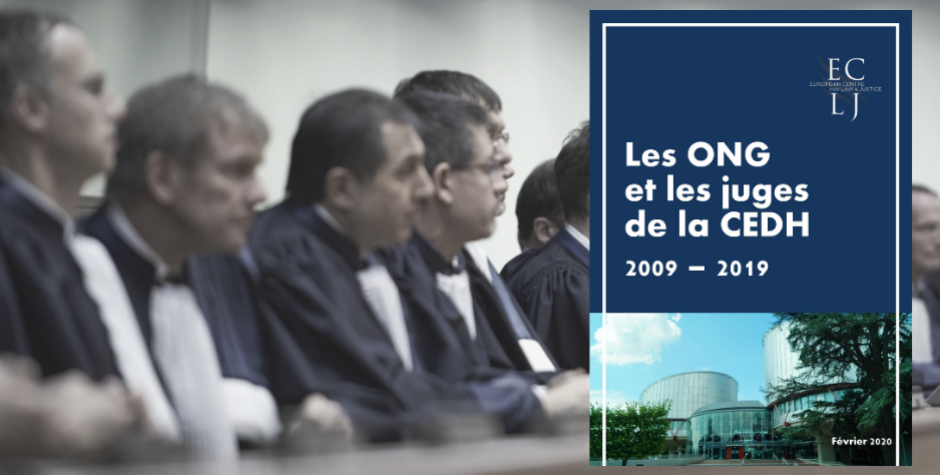 While the European Court of Human Rights (ECHR) has just issued a new abominable decision in the case of the desecration of the Madeleine church by a Femen, the ECLJ continues its fight to denounce the serious and systemic breaches of impartiality by ECHR judges from foundations such as George Soros' Open Society.

The ECLJ has been leading this fight since 2020 with the publication of its report on NGOs and the Judges of the ECHR, 2009-2019. It has been pursuing it since then at the Council of Europe: the “mother organisation” of the ECHR, which brings together 46 States in Strasbourg. This fight is tough, but leading to important progress despite the blows and obstructions of the defenders of the system of influence set up by Open Society and its allies.

As a reminder, this report revealed that, over ten years, 22 of the 100 judges of the ECHR were former members or leaders of the Open Society Foundations or of organisations funded by the latter and active at the ECHR, such as the Helsinki Committees and Human Rights Watch. Even worse: on more than 88 occasions in ten years, 18 of these judges have adjudicated cases in which 'their' own NGO was directly involved. For example, Bulgarian judge Grozev of the Open Society has ruled on cases brought by the NGO he himself founded and directed! These are clear cases of conflict of interest that would, in a normal judicial system, require the judgments in question to be nullified.

A new version of the report will be published in 2023, showing that these conflicts of interest have not ceased, even though some governments have started to denounce them.

The ECLJ has received such blows and obstructions from the defenders of the system in the last few days, when an official petition signed by 60,000 people calling for “Putting an end to conflicts of interest at the ECHR” was submitted. The President of the Parliamentary Assembly of the Council of Europe, Socialist MP Tiny Kox, simply forbade the presentation of this petition to MPs in a public room of the institution on the grounds that it “appears to call into question the independence and impartiality of the European Court of Human Rights, could be perceived as undermining the Court's authority or interfering with its sovereign competence in determining its procedures and working methods”. That is the height of hypocrisy: Tiny Kox is himself a former head of one of the foundations in question.

This is in addition to the obstruction that Tiny Kox is already imposing on members of parliament, by refraining from forwarding to the representatives of the Council of Europe member States “written questions” addressing the malfunctioning of the ECHR.

The petition was nevertheless tabled in the Assembly, in accordance with the rules, and presented to some Members who defied their President's ban. These MEPs then introduced a draft resolution on "The serious problem of conflicts of interest at the ECHR." This draft resolution came in addition to the petition which is also on the agenda of the Bureau of the Parliamentary Assembly of the Council of Europe. The subject is therefore being introduced simultaneously in the Assembly through two different channels. However, there is very little chance that these procedures will succeed, given the strong resistance of the left and centre members. The fact remains that these motions are on the Assembly's agenda and are clearly visible, which is already a success.

Another, more serious, reprisal suffered by the ECLJ on the same day as the petition was submitted was the decision of the Secretary General of the Council of Europe to deny the organisation the status of “accredited NGO”. This status opens access to the institution and facilitates work within it. A rare decision: this status was refused on the grounds that this NGO would not respect “the values and principles of the Council of Europe”. There was only one precedent, in 2018, with the refusal of another conservative Christian-inspired NGO. But what happened to these values? While the ECLJ was refused, 'woke' and Islamist organisations were accepted, such as 'FEMYSO', the Muslim Brotherhood's front man, and components of the global abortion lobby. This is a far cry from the project of the founding states of the Council of Europe, which declared in the Statute establishing the Council of Europe that its values are “the spiritual and moral values which are the common heritage of their peoples”. Thus, the ideological and political character of the rejection of the ECLJ is obvious. It is also arbitrary, as the Secretary General is careful not to specify in what way the ECLJ's action is contrary to the values of the Council of Europe. To do so would be to accuse itself.

But the most important fruit of the report on NGOs and the Judges of the ECHR, and one that definitely vindicates it, is the decision by the governments of the 46 member States of the Council of Europe to prepare a report “evaluating the effectiveness of the system for the selection and election of the Court’s judges (…) and providing additional safeguards to preserve their independence and impartiality.” Yes, several European governments - aware of the problems denounced by the ECLJ report - have insisted that the issue of the independence and impartiality of judges be opened up at the highest level. The diplomatic process of discussion and negotiation is expected to last two years, leading to the recommendation of a series of measures, complementing in depth the recent revision of the Resolution on Judicial Ethics of the ECHR, which was already a consequence of the ECLJ report in July 2021.

However, there should be no illusions. These measures can limit, but not eliminate, the inherent politicisation of the human rights system. Originally designed to protect individuals from the states, the system is increasingly used to export and impose an ideology over states. It has become an instrument of ideological domination, at once ultraliberal, globalist and individualistic. The great postmodern powers, such as the Gates and Soros foundations, are partly responsible for this, and have understood the use they can make of it by investing massively in this post-democratic system of governance.

Op-Ed published in French in Valeurs Actuelles on October 20, 2022.