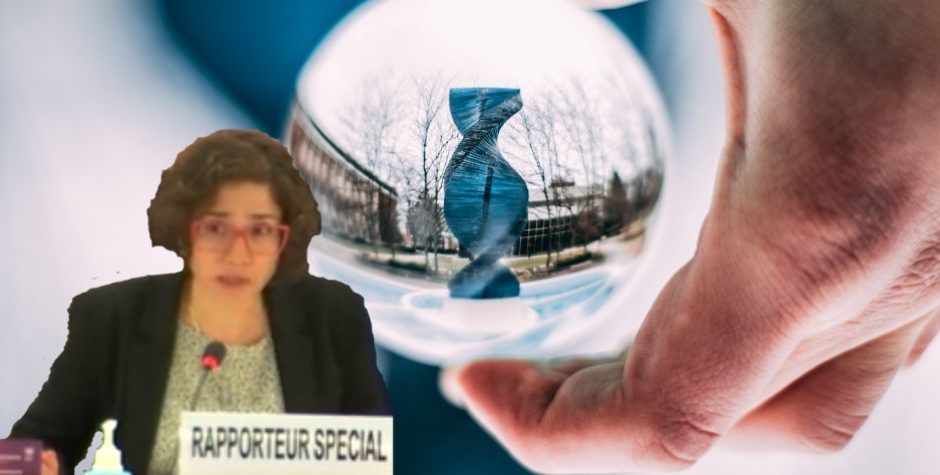 SR on the Rights of Persons with Disabilities Denonces "liberal eugenics"

The Special Rapporteur on the rights of persons with disabilities presented her annual report during the last session of the Human Rights Council, which was interrupted prematurely on 13 March due to the eruption of the coronavirus. She courageously took a stand against "liberal eugenics".

The Geneva-based UN Human Rights Council has a large number of experts and committees responsible for monitoring states' compliance with their international obligations under the treaties they have signed. They frequently send them observations, recommendations or guidelines. As we have already had occasion to denounce, many of these rapporteurs and committees abuse their function to impose "new rights" on States that they have never committed themselves to respecting (see this press release). This is not the case with this report, which concentrates on States' compliance with their treaty obligations (cf. § 18 of the report).

In addition to the Rapporteurs' customary words calling on States to take action, to combat prejudice and to be more inclusive, the Rapporteur, Catalina Devandas-Aguilar, offers some common sense reflections on disability. In her view, there is always or too often an attempt to "repair" or prevent disability. Huge efforts are made to try to cure disabilities, without achieving an appropriate outcome for people with disabilities themselves, whereas more concrete and simple investments to make life easier and alleviate certain difficulties would be much more useful and relevant to them. "(F)rom a disability rights perspective, disability is part of the continuum of the human experience. The question is not about preventing or curing impairments, but how to ensure that all persons with disabilities enjoy the same rights and opportunities as everybody else." (§19)

This report contains two important and positive contributions: the denunciation of liberal eugenics and the euthanasia of people with disabilities. These reflections echo French and European situations on which the ECLJ is actively engaged.

The practice of non-invasive prenatal screening, fully covered by social security since December 2018 in France, is spreading in many Western countries. A simple blood test of a pregnant woman allows the DNA of the foetus to be analysed and to know with 99% certainty whether the foetus is suffering from a genetic malformation. Unfortunately, the revelation of a malformation leads in the vast majority of cases to an abortion. The Rapporteur's analysis is as follows:

When discussing issues such as prenatal testing, selective abortion and pre-implantation genetic diagnosis, there is a shared concern among disability rights activists that bioethical analyses are often used to give an ethical justification to a new form of eugenics, often referred to as “liberal” eugenics. Contrary to the eugenics movement, liberal eugenics aims to expand reproductive choices for individuals, including the possibility of genetic enhancement. While there may be no State-sponsored coercive eugenics programmes, in a context of widespread prejudice and discrimination against persons with disabilities, the aggregate effect of many individual choices are likely to produce eugenic outcomes. Indeed, ableist social norms and market pressures make it imperative to have the “best possible child” with the best possible chances at life. Some utilitarian bioethicists have further argued that genetic enhancement is a moral obligation and that it is ethical to give parents the option to euthanize their newborns with disabilities.(§21)

The ECLJ and other associations have received numerous testimonies from couples who have denounced the pressure they experienced from physcians to perform an abortion considered as a medically justified. This "medical termination of pregnancy" is in fact a fundamental discrimination since it is because the unborn child is disabled that one has the right to terminate his or her life until the day before the presumed birth. This is the case at least in France and in most Western countries. The Rapporteur points (cautiously) to other consequences:

Faced with these legitimate preconceptions and fears of parents learning that their unborn child is certainly a carrier of a genetic malformation, several associations have carried out awareness-raising and family support campaigns. The Rapporteur quotes an British association[1], but some may remember the video clip "Dear future mom", broadcast on television for several weeks and featuring children and adults with Down's syndrome, writing a fictitious letter to a mother carrying a child with the same disability in order to reassure her. The CSA (French Broadcast Administrative Authority) had asked television channels to stop broadcasting such spots, which could psychologically disturb women in this situation who had had recourse to an abortion. The application against this decision of the CSA is still pending before the European Court of Human Rights (see our press release).

"Lives not worth living"

The other issue widely addressed in the report and which also echoes current events in France is the question of the euthanasia of people with disabilities. Euthanasia is practised precisely because people are disabled and because society considers that their lives are not worth living. The Rapporteur summarises very well the fears that have emerged in the wake of the "Vincent Lambert case":

In support of this, the Rapporteur cites figures from countries which have legalised euthanasia, such as Belgium, where requests for euthanasia are increasing sharply among people who are not terminally ill but who suffer from psychological problems.

The ECLJ has also publicly supported the application submitted by Vincent Lambert's parents to the Committee on the Rights of Persons with Disabilities. Without any willingness having been expressed on Vincent Lambert's part, he was officially and publicly euthanized in France in July 2019 because of the seriousness of his disability (see our press release).

The Rapporteur addresses almost exactly this situation and denial of rights in her report:

it has been reported that physicians may exert pressure on critically ill patients and their families to withhold or withdraw life-sustaining treatment based on the belief that further treatment would be futile, non-beneficial or potentially inappropriate, particularly for patients with severe impairments.29That subjective assessment, based on the physician’s opinion and values, includes an assumption on the resulting quality of life of the individual and thus involves a risk that it is influenced by ableist views of living with a disability.30Similarly, cost-effectiveness considerations may also result in the denial of life-sustaining treatments to some persons with disabilities.(§35)

These two subjects are probably the most important in the Rapporteur's view since they are the subject of her first and third recommendations to States[2]. They are part of the problem of eugenics, which is itself a current that runs through history, as the conclusion of the Report shows:

While the eugenic programmes of the late nineteenthand early twentieth centuries have disappeared, eugenic aspirations persist in current debates related to medical and scientific practice concerning disability, such as prevention, normalizing therapies and assisted dying. (§73)

[2] §76, a) and c): "Conduct a comprehensive legislative and policy review to abolish all laws, regulations, customs and practices that discriminate against persons with disabilities, including in the context of medical or scientific procedures, research and experimentation; . . . (c)Explicitly prohibit, in domestic legislation, discrimination on the basis of disability concerning decisions to withhold or withdraw life-sustaining treatment and organ transplantation"