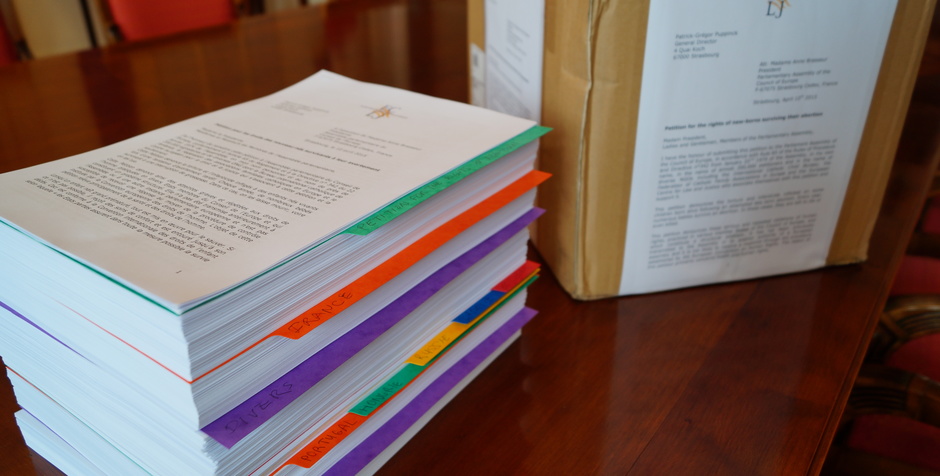 "Petition for the rights of new-borns surviving their abortion": debate starts

Friday, April 24, the Bureau of the Parliamentary Assembly of the Council of Europe formally received the "Petition for the rights of new-borns surviving their abortion" and decided to forward it to the Committee on Legal Affairs and Human Rights.

This is an important first step that marks the beginning of the legal and political investigation of the petition by the deputies.

The petition, initiated by the European Centre for Law and Justice (ECLJ) and supported by the Office of International Catholic Child (BICE) and the Federation of Catholic Family Associations (FAFCE), has been signed to date by more than 185,000 European citizens, making it the largest petition in the history of this european assembly. Filed according to the official procedure, it is asking the Assembly to take up the situation of children who survive their abortion, to condemn the practice of neonatal infanticide and to remind that every living person born has the right to respect for his or her life and deserve to be taken care of, regardless of the circumstances of his or her birth. Indeed, each year, many children are born alive after late-term abortions, especially when they are practiced beyond the 20th week of pregnancy. Currently, the ECLJ is collecting testimonies, particulary from midwives, about the fate of these children that are often left to die without care.

First, the Committee on Legal Affairs and Human Rights will decide whether the petition falls within the Assembly's jurisdiction. Legally, there is no doubt but that first decision is already political and some MPs will state the contrary. With this consideration on the admissibility begins a discussion that may continue with a reporting procedure and perhaps a resolution, depending on the political forces within the Assembly.

The ECLJ is committed to do everything possible to ensure that this petition will lead to the effective condemnation of this infanticide.

El Salvador: A Case of InfanticideBy Ligia Castaldi1600850186398
The Inter-American Court of Human Rights will rule on an important case on abortion against El Salvador. The ECLJ will intervene before the Court in defence of human life. Professor Ligia De Jesús...
Read More

Covid-19 & women’s reproductive healthBy Christophe Foltzenlogel1600149600000
The Working Group on Discrimination against Women and Girls of the Office of the United Nations High Commissioner for Human Rights is preparing a report on the sexual and reproductive health and...
Read More

Abortion for Psychological Distress?By ECLJ1599817686835
The Assembly adopted, as part of the bioethics bill, an amendment adding "psychosocial distress" to the grounds for authorizing a medical abortion up to birth. Article published in The FigaroVox on...
Read More