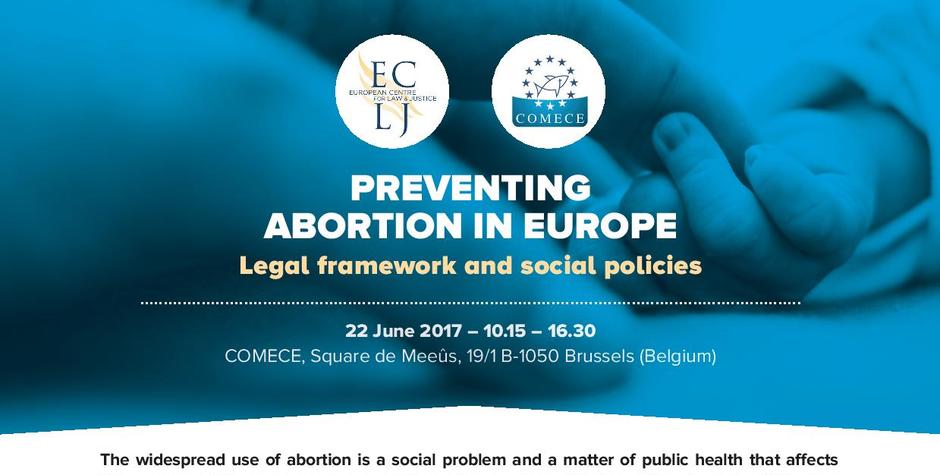 Find out the videos and texts of all the interventions made that day (we will progressively upload them all).

The widespread use of abortion is a social problem and a matter of public health that affects the whole society and engages our future. The purpose of this seminar is to identify good practices for effective abortion prevention policies, particularly among young people.

Abortion is a public health problem

Every year in Europe, about 4 million women end their pregnancies; more than 30 million abortions were performed since 2010, representing a quarter of all births (Guttmacher Institute, Datta Center).

It is possible to reduce the recourse to abortion

Abortion is not inevitable; many countries have managed to reduce the abortion rate thanks to prevention policies.

In the US, the teenage pregnancy rate was reduced by half between 1990 and 2010 thanks to a campaign centred on abstinence to value sexuality and human life, and to make teenagers aware of their responsibilities. The number of high school seniors declaring to be abstainers has doubled from 33% to 66%, causing a reduction of two thirds of abortions among young people, a decline of STDs and an improvement in their emotional and psychological balance.

Many concrete preventative measures need to be implemented, aiming in particular at better educating young people, to help women and empower fathers.

Reducing the recourse to abortion should be a priority

Reducing the recourse to abortion is also an obligation contracted in international law. Most of European States have committed themselves to support family, motherhood and children "before as well as after birth" (Convention on the Rights of the Child), to "reduce the recourse to abortion" and to "take appropriate steps to help women avoid abortion" (Cairo Conference). The Council of Europe also called on European states to "promote a more pro-family attitude in public information campaigns and provide counselling and practical support to help women where the reason for wanting an abortion is family or financial pressure." (PACE, 2008).

This event was co-sponsored by Sallux*, the Fondation Jérôme Lejeune & Alliance Vita.

*Since 2011, the activities of Sallux have been financially supported by the European Parliament. The liability for any communication or publication by Sallux, in any form and any medium, rests with Sallux. The European Parliament is not responsible for any use that may be made of the information contained therein.