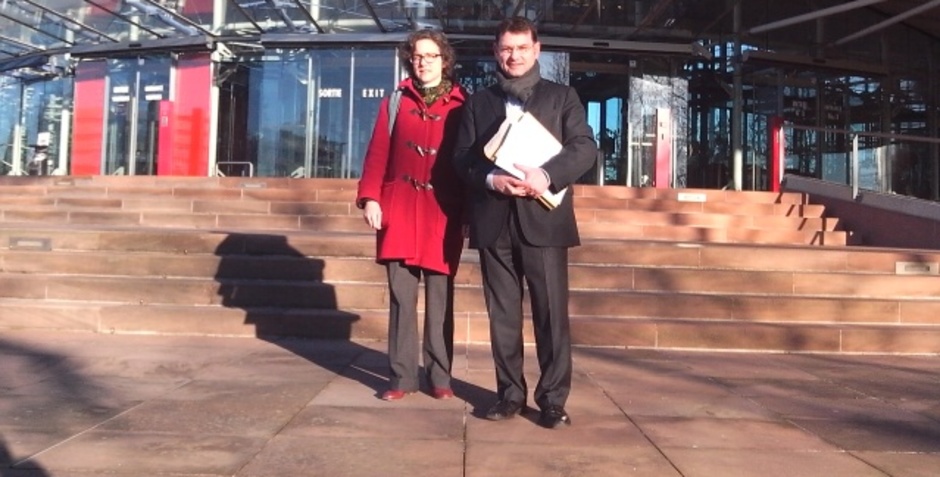 13 Mayors Denounce the Bias of the Constitutional Council

On Monday 24th of February, 13 mayors lodged an application at the European Court of Human Rights denouncing the violation by the Constitutional Council of the right to a fair trial. As a reminder, on the 18th of October 2013, the Constitutional Council had judged that the absence of a conscience clause for mayors who refused to celebrate the marriage of same sex partners was in accordance with the Constitution. Such a refusal can be subject to a criminal sanction (5 years of imprisonment and a €75,000 fine) and a disciplinary sanction (up to revocation).

Despite the fact that the conciliation between the application of the Loi Taubira[1] and the right of mayors to a freedom of conscience would be easily achieved as prefects have the power to replace mayors, the Minister of Interior Affairs objects to it when it comes to marriage. Several mayors who have made such requests to their prefects are now being prosecuted by the administrative judge.

The decision of the Constitutional Council poses a substantial problem as mayors are being deprived of the most fundamental of human rights, the freedom of conscience. As the Conseil d’Etat must still pronounce itself on the matter – after the municipal elections – the claim presented at the European Court of Human Rights does not mention it: it solely concerns the procedure followed by the Constitutional Council, contested by the mayors because it did not respect the rules, and in particular its own internal rules and the fundamental principles of law.

While the petitioners normally have three weeks to submit their first written observations and a similar period of time to answer the observations of the government, the Council gave them nine days in this case. In response to the protests of the petitioners the Council magnanimously agreed to allow them an extra week-end, pushing back the delay to Monday at noon, thus giving them a total of twelve days. It then allowed them four days to respond to the observations of the government. These deadlines, shortened without motive, were so short that they deprived the petitioners of the necessary time to prepare their arguments.

Furthermore, when the internal rules permitted any directly concerned person to present observations within the limit of three weeks, the Constitutional Council, without any explanation, halved this limit, in order to discourage any potential intervenors. Two months later, on the 22nd of November 2013, the Constitutional Council modified its internal rules in order to disguise this procedural flaw.

Several mayors, conscientious objectors under the threat of sanctions, some of which are already being prosecuted, had still decided to present observations. The Constitutional Council rejected them, stating that these mayors were not directly concerned, which was blatantly false. This rejection was a convenient way to avoid having to respond to their new arguments, which could have made the Council feel awkward. Indeed, the mayors were not only reminding the rules protecting freedom of conscience and expression, but they were also denouncing the violation of the internal rules of the Constitutional Council and especially they were stating that it did not constitute an impartial jurisdiction, for personal but also structural reasons.

Several of the members of the Constitutional Council, and in particular its president, had made it known, before the adoption of the law and in the days preceding the audience, that they personally supported the Loi Taubira and refused in principle to judge it unconstitutional. They should have thus refrained from judging the case. The mayors were expressly asking that the president of the Constitutional Council be challenged. On the structural level, the Council always sits in plenary session, resulting in the fact that the same members judge the law before its promulgation and after it, through the mechanism of the “question prioritaire de constitutionalité” (prioritized question of constitutionality). The same judges had thus already judged the concerned law and were thus not impartial. The European Court of Human Rights is very strict as regards this question of structural bias.

What is at stake in this case goes beyond the strict question of the procedure. Elected personalities are being sanctioned for their political convictions, which is absolutely contrary to democratic principles. The municipal elections being very close, the denial by the Constitutional Council of a right to freedom of conscience for mayors has the effect, or even the goal, to dissuade those who do not share the government’s current position, from running in the elections, which poses a serious problem of pluralism.