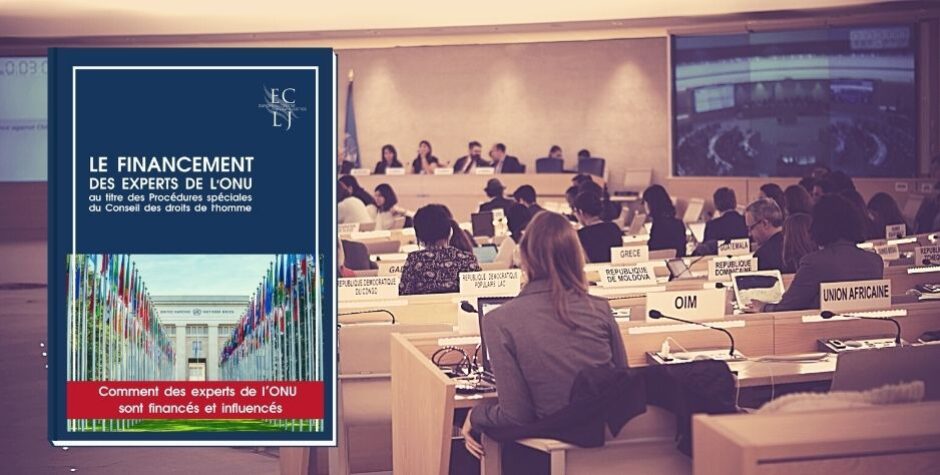 The financing of the UN experts

After having highlighted the conflicts of interest between certain NGOs and judges of the European Court of Human Rights (ECHR), the ECLJ has continued its investigation of another international institution based in Geneva: the United Nations Human Rights Council.

The ECLJ is proud to publish today a new report proving violations of the independence of many experts of this institution.

In its previous report, the ECLJ demonstrated the existence of conflicts of interest involving ECHR judges. The accuracy of this first report has since been recognized by the ambassadors of the Council of Europe.[1] This time, the ECLJ has devoted several months to meticulously studying the public financing declarations of the UN's experts. We then interviewed them to get their opinion on these issues. The ECLJ was able to conduct more than twenty-five interviews with these UN Special Procedures experts, and what emerged was revealing.

The main conclusion of this report is that private foundations directly finance UN experts to write reports that align with these private foundations' agendas. These reports are then promoted as independent recommendations from the UN, and used by governments and international courts to support or justify their decisions. This is in flagrant contradiction with the code of conduct for experts and the resolutions of the Human Rights Council. Experts should be independent not only from States but also from private foundations that seek to align the experts' agendas with their own.

One example among others from our report: Juan Méndez, Special Rapporteur on Torture between 2010 and 2016, was at the same time a member of the Board of Directors of the Open Society Justice Initiative.[2] The Open Society Foundations provided him with a two-year grant of 200,000 USD to fund his research center, the Anti-Torture Initiative, which assists him in writing his reports.[3] In 2015, Mr. Méndez received a 90,000 USD grant from the Ford Foundation to organize an expert consultation on the topic of gender and torture,[4] and to hire a research assistant to write a thematic report on gender and torture and to promote it.[5] The expert report on gender and torture was officialy published by the UN on January 5, 2016, and promoted abortion in the same terms as the foundations that funded it.[6] In this final Report, at no point does the Rapporteur refer to the generosity of the Ford or Open Society Foundations.

Again, we note that the Open Society and its affiliated foundations are among the most generous funders of Human Rights Council experts, along with the Ford Foundation.

Our investigation also shows that the situation of experts varies greatly. Some are not funded; others resist proposals or resign, and are therefore most pleased with the ECLJ's investigation. Others still seem to accept private funding without understanding why it would be problematic, and finally, others gladly accept hundreds of thousands of dollars to promote causes they share with the foundations, even though these ideological battles may fall outside the scope of their mandates.

In its report, the ECLJ endeavors to explain the causes of this flaw in the protection of the independence of experts, why private foundations invest massively in the UN Special Procedures, why the same foundations often act before the ECHR, and what solutions could be promoted to prevent this “capture”" of UN experts.

The ECLJ is pleased that the French weekly journal Valeurs Actuelles has dedicated its cover and a twelve-page article to this important investigative work. Indeed, the data and conclusions of this report are based on official statements freely available on the website of the UN Human Rights Council, on the websites of the foundations funding the experts, and on the direct statements of some of these Special Procedures experts.

For statistical purposes and to keep you informed of the follow-up of this report and our other actions, we simply ask for the email address of those who wish to download this report. In accordance with the GDPR in force, you can unsubscribe from our emailing list at any time by simply clicking on the footer of the email.

[6] UN, “Gender perspectives on torture and other cruel, inhuman and degrading treatment or punishment”, A/HRC/31/57.