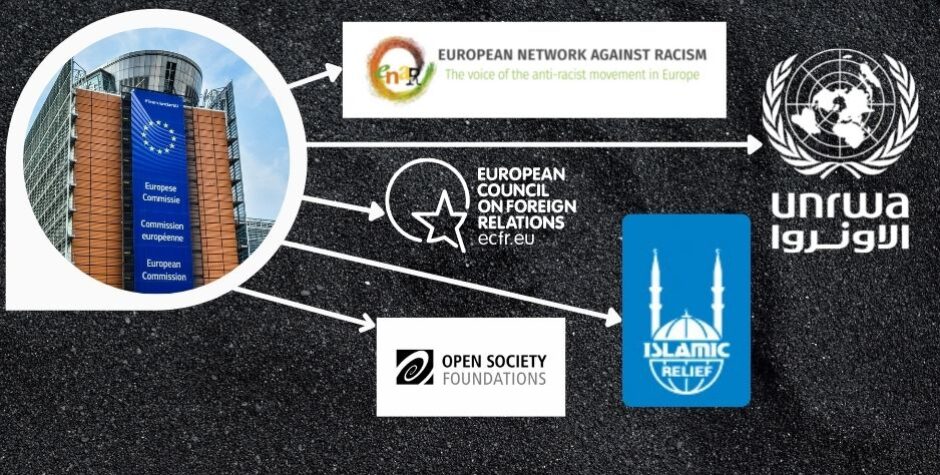 How the EU Funds Anti-Israeli NGOs

A recent parliamentary report denounced the public funding, by the European Commission, of anti-Israeli NGOs, part of the Open Society Foundations (OSF) network.[1]

By Louis-Marie Bonneau, Research Fellow at the ECLJ. Article first published in French in Valeurs Actuelles.

It is based on the sources of the Commission's financial transparency system[2] and on the figures of various NGOs such as Monitor[3] and Regavim Movement.[4] As a result of this investigation, it calls on the European Parliament not to give its final approval on how the European Commission has implemented the 2019 budget. The Committee on Budgetary Control will have to decide on this issue on 22 March 2021.

According to the report, in 2019, nearly €34,000,000 of European subsidies were given to these NGOs. However, the author of the report deemed that, due to the lack of transparency, the real figure is probably much higher. For him, this funding discriminates against conservatives while violating the European Commission's obligation of political neutrality. Indeed, Joachim Kuhs, the author of the report, considered that these groups funded by the European taxpayer are not real NGOs, but rather quasi-governmental organizations (QUANGOs) that are the armed wing of anti-conservative activism in Europe and around the world. In the European Union member states alone, the Commission has funded various "QUANGOs" of the Open Society Foundations galaxy for a total of 25 million euros. For example, the Helsinki Committees received €887,410 and Open Democracy €75,001. These organizations are particularly active regarding open borders and the fight against "hate speech". Richard Abelson analyzed Joachim Kuhs' report in an article entitled For "Open Borders" and censorship of "Hate Speech". In this interview, he declared that "Given the economic crisis caused by the COVID pandemic, it's hard to explain to taxpayers why the EU is spending our money on left-wing NGOs that advocate a radical 'No Borders' agenda, conduct 'lawfare' campaigns against democratically elected governments, and attack conservative leaders like Matteo Salvini and Viktor Orbán." He added that he found no examples of conservative NGOs receiving funding from the Commission.

The Rapporteur noted an established willingness on the part of the European Commission to fund anti-Israeli organizations in particular. For example, it supported influential groups such as the European Council on Foreign Relations (ECFR), which is very close to George Soros, has a pro-migration agenda, and is opposed to sovereignty and to Israel. The ECFR refers to Israel as an "occupying power" and an "apartheid state".[5] The report also shows, for example, that the European Commission funds organizations close to the Popular Front for the Liberation of Palestine (PFLP), a group that the European Union has however classified as terrorist.[6] The Commission has also financed NGOs that multiply legal appeals and support violent demonstrations. Joachim Kuhs also criticized the European Union for funding the United Nations Relief and Works Agency for Palestine Refugees in the Near East (UNRWA) for a total of $131,742,673 in 2019. He considered, in fact, that this organization "has close ties with the terrorist organizations Hamas and Fatah". In addition to this, European funds have financed the Palestinian Authority (PA) for a total of €257,450,000 (program "PEGASE: direct financial support to recurrent expenditure of the Palestinian Authority"). However, the author explained that with this funding, the organization pays the families of killed and imprisoned terrorists. Indeed, the PA has set up a program ("Pay-for-Slay") offering an "automatic pension for life for the family of anyone who murders a Jew." Joachim Kuhs noted that the European Commission does not fund any conservative think tanks in Israel.

The European Union also funds such NGOs in other regions, such as the Balkans or South Africa. It also appears that it offers financial support to groups linked to the Muslim Brotherhood. For example, €550,000 were given to Islamic Relief Germany, an organization with links to the Hamas, the Hezbollah, and the Muslim Brotherhood, according to the report. The European Network against Racism (ENAR), whose director, Michaël Privot, was a member of the Muslim Brotherhood until 2008, received 1,156,162 €. All these elements raise questions about the ideological choices of the European Commission and the way it administers European public money.

[1] Echo Chamber: The Quango Feedback Loop - Issues of Concern with the EU Budget 2019