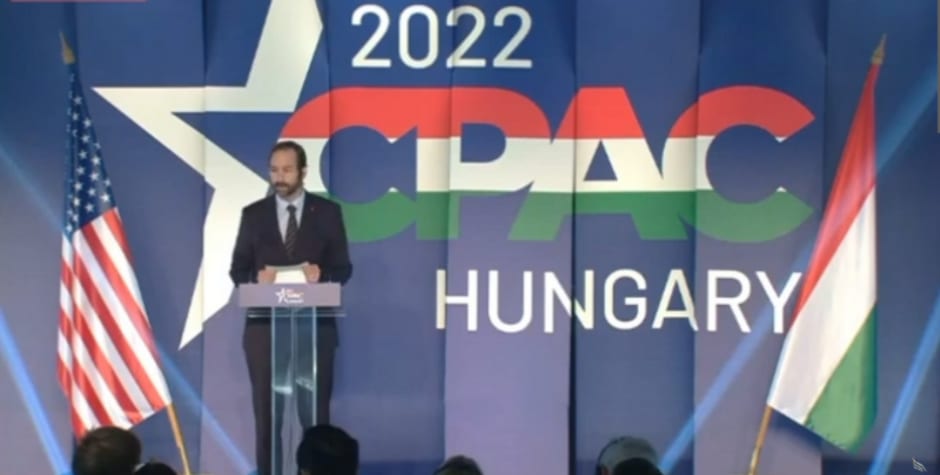 Grégor Puppinck, director of the ECLJ, spoke at the major Conservative Political Action Conference (CPAC) in Hungary on May 19-20, 2022. CPAC is the largest gathering of conservatives in the world. Launched in 1974, CPAC brings together hundreds of conservative organizations and thousands of activists and viewers.

While this international forum usually takes place in the United States, it was held for the first time on the European continent, in Hungary, a country that symbolizes resistance to the "woke" culture. Victor Orban, the newly re-elected Hungarian Prime Minister, spoke under the motto of the event: "God, Country, Family." Many speakers shared the floor over two days, including former British MEP Nigel Farage, Americans Rick Santorum, Candace Owens and the famous Fox News host: Tucker Carlson. Finally, two Frenchmen: Jordan Bardella, RN MEP and Grégor Puppinck. The ECLJ is one of the international organizations defending natural law, the common good and fundamental freedoms against positivist, individualist modernity and the deconstruction of our civilization. Here is the speech that Grégor Puppinck gave in the grandiose conference center "Bálna" (whale) in Budapest:

The title of the panel is “The father is a man and the mother a woman.”

Yes, I agree! As a husband and a father, I can tell you that the father is a man and the mother a woman. But moreover, the man should be a father. I mean that to be accomplished, a man ought to be a father, or at least to behave as a father, even if he has no child. A father is someone who gives protection and direction, who has authority and bears responsibly.

But, today, sadly, too many boys do not even have an idea of what it means to be a man, a husband, and a father. Where are the examples of such men when the liberal doxa pretends to “deconstruct” sexual genders? In France, Mr. Macron is an example of such a deconstructed person, he asserted that a father is not necessarily a male.

Of course, without fatherhood there cannot be any strong family, but neither any lasting “fatherland”’.

The destruction of the fatherhood leads to the one of the fatherland, because the family is the place where persons can be deeply rooted in one land, and in history. It is the family and the homeland that allow us to live with historical depth, and not just float on the surface of current events.

The family is the unique place of transmission of life and culture.

In a world that is more and more artificial and virtual, the family also roots us deeply in nature, in biology. Blood ties, sexuality and procreation are the most direct and beautiful experience of our participation in natural life. There is nothing more ecological than defending the family.

I want to add that family is a reality you cannot “buy”. Family reminds us that the most important things in life are not for sale. It takes virtues rather than money to found a family.

But the destruction of the family doesn’t lead only to the one of the homeland, it also leads to the loss of our true and fundamental freedoms.

We know that all dictatorships have in common their will to destroy the families. They want to transform the natural, organic composition of society into an artificial construction, to take the place of the parents and of God in order to control and submit society.

This was, and still is, the willingness of the communists and all kinds of socialists.

After the Second World War, the drafters of the Universal Declaration of Human Rights wanted to oppose dictatorship rebuilding the society on the family. The UDHR says that it is the family, not the individual, that is "the natural and fundamental group unit of society", That is to say that it does not owe its existence to the state.  Since then, numerous international texts, have uphold the natural and organic understanding of society, based on subsidiarity: man is not an abstract and isolated being but a living and social one.

As well, drafters of the European Convention of Human Rights wanted to protect the rights of parents to educate their children. Through the family, they wanted to protect – I quote - the “youth against the threat of nationalization, appropriation, or requisition by the state.”

Yes, families are a wall, a bulwark against dictatorship, they are a bastion of liberty. Because it is within families that all heritages survive and are transmitted: education, religion, history, and love.

It is wrong to say that individualism is the only alternative to collectivism and dictatorship. Because radical individualism also leads to alienation, as we all know. It leads to a similar submission to the State and other global powers.

In this regard, the postmodern ideology is not different from the communist and the socialist ones.

The family is at the opposite of the postmodernists. This is why they hate it so much and try to destroy it. The families are under attack at every level, We know that. It is deconstructed in the laws and the media, and the parents are increasingly dispossessed of their rights and duties towards their children.

Today, sadly, too many children, boys and girls, do not know what a healthy family is. Even the European court of human rights deconstructed the family: it became purely subjective, just a kind of emotional ties between individuals.

The destruction of the family is done in the name of freedom, of individual freedom, but it is a path to servitude.

This is the fool's bargain of the postmodernists. They pretend that the individual is finally becoming “autonomous”, and that this is the greatest progress of humanity to have the rights for the men to be a mother, or to kill himself through assisted suicide or to practice abortion.

In reality, no one has ever been less autonomous than today's post-modern individual who is totally dependent.

If we want our countries to be strong, to survive and to remain independent, we must reinforce the family in all its dimensions.

This is why, as a final word, I want to congratulate Hungary for its successful family policy leading to more marriages, less divorces and more births. This should be the main goal of every decent politician.

I thank you very much.