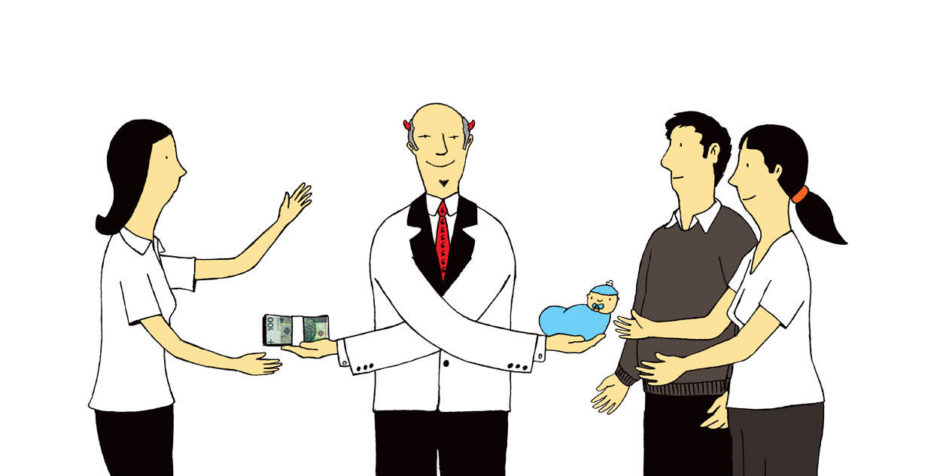 Towards the fulfilment of an individual right to a child?

To an individual right to a child?

What will change in French law if “ART for all” were adopted? This is the question that Claire de La Hougue, PhD in law, associate researcher at the ECLJ, answers by pulling one by one the threads of a law that will sweep one after the other all the last safeguards against the commodification of the child, the body of the woman, the human body itself.

The government plans to allow medically assisted reproduction for all women. Currently, medically assisted reproduction is available to living man and woman couples, of child-bearing age and with medically certified infertility, or to prevent the transmission of a serious illness. Even though this reform is primarily planned for the moment as a right of access to artificial insemination for women who are single or living with another woman, other forms of assisted procreation would be included, immediately or in the future.

Removing the condition concerning the couple would mean lifting the requirement of a medically certified infertility. This would imply abandoning the principle of medically assisted reproduction to palliate sterility, thus established on the natural model of procreation to remedy a pathology, and replace it with convenience medically assisted reproduction. This would involve using medicine not to cure, prevent or circumvent a pathology, but to satisfy individual desires.

The abandonment of the natural model would make it possible to lift all the limits, in the name of the satisfaction of a desire, of the appeasement of a suffering or of a claim of biased equality. This extension would prompt the lifting of the other two conditions under the current law - that the members of the couple are alive and of childbearing age - then justify the authorization of surrogacy and probably other “family models”.

Post-mortem insemination, oocytes storage, surrogacy: the end of the barriers

Regarding post-mortem insemination, it would be difficult to accept that an unmarried woman could resort to artificial insemination but that a widow could not or, even more absurdly, that the widow could only resort to the gametes of a stranger and not of her husband.

There would be no reason to deny medically assisted reproduction to women beyond the childbearing age, since the natural model would be abandoned. The claim to conserve one's oocytes for later procreation serves the same purpose of suppressing the age limit.

Then would surrogacy come, presented as it is by its promoters as a form of medical assistance to procreation. They have already started to demand it by invoking the suffering of couples whose wife produces oocytes but cannot bear children for a medical reason such as a lack of uterus. In the name of an erroneous conception of equality, in the absence of any reference to nature, there would be no reason not to satisfy the desire of these couples, then that of men in need of children whether they are alone or in a relationship with another man, or women who do not wish to jeopardize their career, comfort or appearance through pregnancy. Surrogacy would therefore be legalized after a delay intended to make believe that this consequence was not foreseen.

After the rejection of the natural model, there would be no reason to limit the “parental project” to two people. Why couldn’t three adults - or more - want to conceive and raise a child together? On the other hand, if the parental project and love became the foundation of the filiation, it would lose all its stability –and the child his safety– for the end of the feelings or the change of project would justify the abolition of the filiation. One could thus see the rise of multiparental families and of temporary filiation...

The extension of medically assisted reproduction to all women would consecrate the exclusion of the father from the life of the child. At a time when fathers are encouraged (or obliged) to assume their responsibilities towards children and where the dramatic consequences of their absence are observed every day, it would be completely incoherent to ratify by law the eviction of the father.

Questioning the commodification of the human body

The extension of medically assisted reproduction would also have practical consequences, particularly concerning the supply of gametes. Donations are already insufficient to meet the demand due to medically certified infertility. The extension to “all women” would result in a considerable increase in demand, thus worsening the shortage of gametes, increasing waiting times. Candidates for artificial insemination or in vitro fertilization would therefore continue to go abroad. To remedy this lack of gametes, it would be necessary either to abandon the obligation of free donation of products of the human body, or to buy gametes abroad, where its sale is allowed, as some of our neighbors already do. All this would contribute to the commodification of the human body and legitimize the sale of organs.

The weight of eugenics

The increase in the number of in vitro fertilizations would also worsen the problem of supernumerary embryos and the tendency to eugenics. In countries where the sale of gametes is legal, candidates choose donors in catalog, based on their physical characteristics, medical records, intellectual abilities and so on. The oocytes of a young white graduate woman cost more than those of a colored non-graduate woman...

All this would only aim at satisfying the demands of adults, without taking into account the interests of the children. The child would be only the object allowing the satisfaction of a desire, the fact that he is deprived of a father and amputated of its origins being no big deal.

The extension of medically assisted reproduction to all women would mean the institutionalization of a filiation without a father, creating an inequality between children who have a father and those who would be deprived of him by society and the law, between children who have the right to have a credible filiation (and the right to seek it if necessary) and those who would be deprived of it.

As the French National Advisory Ethics Committee acknowledged in its 2005 report on access to one’s origins, “medicine would simply be summoned to satisfy an individual right to a child”.