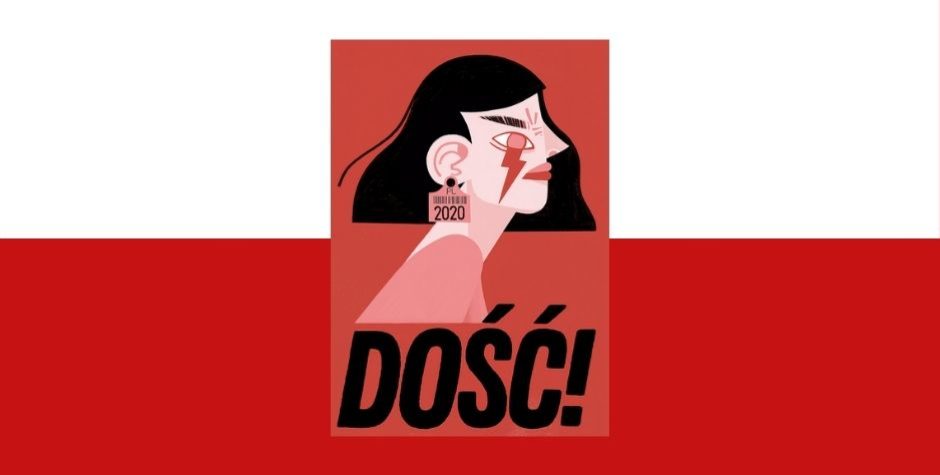 Since the Polish Constitutional Court decision banning eugenic abortion (see our article here), demonstrations have been taking place all over Poland to protest the ruling with the slogan "It's war!". While most of the demonstrations are not massive in character, with the number of demonstrators varying from a few tens to a few thousand (but up to 430,000 counted throughout Poland by the police on the evening of October 28), the protest movement is characterized by its excess and a level of aggression and vulgarity never before seen in Poland.

The first target of the demonstrators, which seems to be part of the cultural war led by the extreme left for some time now, is the Catholic Church, victim of repeated acts of vandalism, even though it is not at the origin of the judgment of the Constitutional Court, while its positions on abortion are known to all. On Sunday 25 October, holy masses were interrupted at the call of radical organizations such as Strajk Kobiet (Women's Strike). Catholics complain that the police were too passive, while voluntarily interrupting a religious service in order to obstruct it is a crime punishable by two years of prison in Poland and while churches with historical monument status have not been spared by pro-abortion or insulting tags against Christians. Priests have been covered with insults and swear words, often with sexual overtones. Nationalist circles have created a national guard to defend the churches and have called on Catholics and other citizens outraged by these attacks to join them. Groups of soccer supporters also joined the persons protecting churches, making the attackers in several cities flee away, such as in front of the cathedrals of Białystok and Poznań. In a separate incident, far left activists attacked with truncheons and knives people defending a church, injuring one of them. Clashes also happened in Warsaw, where defenders of the Church of St. Alexander led by the organizers of the Independence March, which takes place every November 11 in Warsaw, banned several thousand pro-abortion protesters. On the whole, however, physical clashes remained marginal, as Polish police tried to keep demonstrators and counterdemonstrators at bay.

Commentators noted that such acts against churches and believers did not occur, even under the communist regime. Nevertheless, left-wing deputies did show solidarity with the demonstrators, including within the Lewica (The Left) group, whose main component is the post-communist SLD party, which was behind the 1997 Constitution in force, on the basis of which the Constitutional Court banned eugenic abortion. On Tuesday, the Strajk Kobiet movement published on its Twitter profile the personal addresses of Constitutional Court judges and pro-life activists as a way of inciting pro-abortion activists to physically attack them. Demonstrations were also organized in front of the PiS headquarters and in front of the headquarters of the pro-life organization Institut Ordo Iuris in Warsaw.

Is the abortion issue just a pretext?

However, the demands of the Strajk Kobiet movement go far beyond the judgment of October 22. On Tuesday, 27 October, the leader of this organization, Marta Lampert indicated that she wants, among other things and in addition to the resignation of the government of Mateusz Morawiecki, "a true Constitutional Court", "a true Supreme Court", "a true Defender of Rights", sex education in schools, contraception, legal abortion (on simple request, which the Constitutional Court has already declared contrary to the Constitution in a 1997 judgment) and, curiously, "respect for the rights of persons with disabilities".

For this jurist, there was no judgment on Thursday but a simple declaration as the Constitutional Court is illegitimate in her eyes, an argument put forward by a part of the liberal (Civic Platform, PO) and leftist (Lewica) opposition. This argument refers to the conflict surrounding the first appointments to the Constitutional Tribunal by the PiS in 2015. However, this is a fallacious argument in the present case, because even if it were admitted that the PiS was at fault for these appointments, the conflict only ever concerned three judges out of the fifteen that constitute the Constitutional Tribunal. Eleven out of the thirteen judges who took part in this verdict ruled that the 1997 Polish Constitution was not compatible with the provision of the law allowing eugenic abortion. Therefore, even without the three judges whose legitimacy is being challenged by part of the opposition, there would still be a majority in the Polish Constitutional Court to invalidate this clause.

Continuity at the Polish Constitutional Court

In an interview given in 2016 to the newspaper Gazeta Wyborcza, which today incites demonstrations and protests in front of churches, the former president of the Constitutional Court, Andrzej Rzepliński, who had been at the centre of the conflict against the PiS in 2015-16, had himself said: "No matter how elegantly one tries to name it, abortion remains a murder". As for Professor Andrzej Zoll, who presided over the Constitutional Court in 1997, when a clause introduced by the SLD to authorize abortion on the grounds of the socio-economic problems of pregnant women was found to be unconstitutional, he himself acknowledged on the radio Tok FM (which belongs to the same media group as Gazeta Wyborcza) that the October 22nd judgment of the Constitutional Court was in line with his moral convictions, even though he believes that it would have been preferable for the invalidated clause to have been amended earlier by parliament itself in order to limit its application to cases where the unborn child is the victim of a lethal abnormality. For Zoll, this is the only case in which allowing abortion on the grounds of disability or serious illness of the unborn child could be in conformity with the Polish Constitution. In that, he joins his voice to some leaders of the PiS-led United Right parliamentary coalition and also to some of the opposition. These voices, joined by President Andrzej Duda's on 29 October, are calling for abortion to be allowed from now on in cases of confirmed lethal abnormalities but not in cases of non-lethal disabilities (such as Down Syndrom, the cause of 445 of the 1,110 abortions performed in Polish hospitals in 2019). Opinions differ as to whether the Constitutional Court's ruling leaves parliament this room for manoeuvre. For all intents and purposes, it should be recalled that Andrzej Zoll was appointed to the Constitutional Court by the left-wing majority in power from 1993 to 1997 and Andrzej Rzepliński was appointed by the PO-PSL majority in power from 2007 to 2015.

The Polish opposition no longer wants to respect the Constitution

Under these conditions, the refusal to recognize the legitimacy of the October 22nd judgment expressed by feminist organizations and part of the opposition is more akin to a rejection of the functioning of democratic institutions and a demand for the right to apply the Constitution selectively, which is surprising on the part of those who have been accusing since 2015 the PiS of violating the Constitution with its reforms. The same is true of the appeals not to publish the October 22 judgment in the Official Gazette from, for example, the leader of the agrarian party PSL Władysław Kosiniak-Kamysz and the former PO leader Grzegorz Schetyna. In 2016, both men criticized Beata Szydło's government for its refusal to publish certain decisions of the Constitutional Court presided over by Professor Andrzej Rzepliński on the grounds that these decisions had been adopted in the presence of an insufficient number of judges in view of the law reforming the Constitutional Court adopted by the PiS majority in parliament. Today, even this ground (whose validity was contested at the time by the opposition) is absent since 13 judges took part in the October 22nd judgment, which does not prevent Kosiniak-Kamysz and Schetyna from calling on the government of Mateusz Morawiecki to do the same simply to prevent the entry into force of the judgment on abortion. So today it is a certain part of the opposition that is demanding that the government openly violate the constitution so that eugenic abortion remains legal in Poland!

The appeal from Jarosław Kaczyński

Reacting to the events, the president of PiS Jarosław Kaczyński, who is also vice-president of the Council of Ministers in the government of Mateusz Morawiecki, made a statement on Tuesday, October 27. "In light of the Constitution, this judgment could not be different," acknowledged Kaczyński, recalling once again that this is the Constitution approved in 1997 by a left-dominated parliament. Kaczyński reproached the organizers of the demonstrations with promoting the spread of the Covid-19 pandemic by violating health regulations, but above all for attacking the Church and Catholics in an overall rejection of the value system in force in Poland. Kaczyński attributed this attitude to the "nihilism" visible in "the expression of those who demonstrate", of "their uncommon vulgarity". Kaczyński then called on Poles to oppose this protest movement and to join the defence of Polish churches. "Let's defend Poland, let's defend patriotism, and let's show decision and courage," said the PiS leader. "Only then will we be able to win this war that our opponents have expressly declared to us. And let us remember that we are absolutely right legally. This judgment cannot be changed as long as the current Constitution is in force. A fortiori, we cannot pass a law that would introduce abortion on demand. This is the demand of the extreme left, expressed today at the Diet to the cries of 'War! War!"