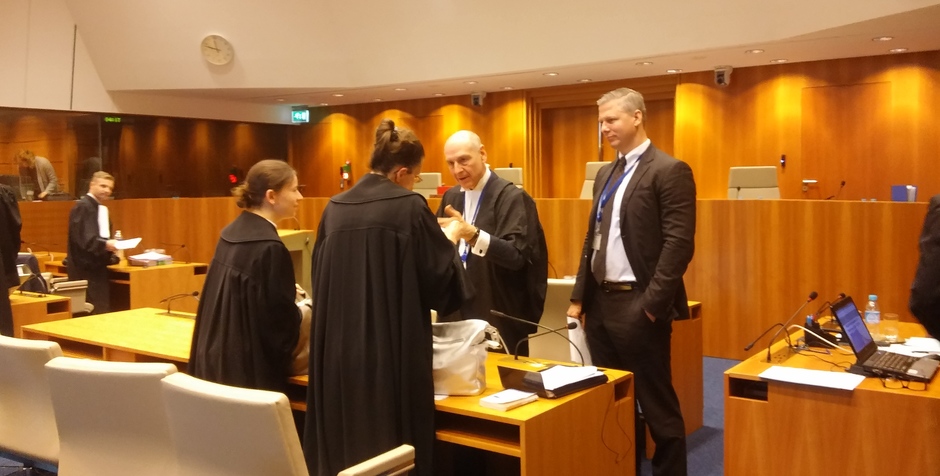 Hearing of One of Us vs. EU Commission: Democracy at stake

Hearing of One of Us vs. EU Commission

The hearing of the case One of us versus the European Commission was held on Tuesday, May 16th 2017 in front of a chamber composed of five judges of the Court of Justice of the European Union, in Luxemburg.

The European Citizen’s Initiative (ECI) One of us, which has gathered almost two million signatures in Europe, asks for the prohibition of European funding to activities involving the destruction of human embryos, especially for research and international cooperation. In a Communication signed by M. Manuel Barosso on May 28th 2014, the Commission refused to transmit the citizen’s initiative to the European Parliament to be debated, without answering all the questions raised by the initiative.

The audience of Tuesday, May 16th 2017 enabled the British lawyer Paul Diamond who represents the initiative to focus the debate on the democratic question (see his argument). As noted by Carlo Casini, the initiator of this ECI and present at the audience:  “democracy in the European union and the mechanism of European citizen’s initiative were to enable the rapprochement between citizens and the European Union. If the Commission says no, it is the rapprochement that is refused”.

How can the Commission block an initiative which has fulfilled all requirements and gathered 1,7 million valid signatures ? Contrary to the intention of the Lisbon Treaty and of the mechanism of the initiative, the European Commission has simply refused to share its power of legislative initiative.

The representatives of the initiative denounce the justification for the refusal, merely political and not founded on legal arguments. As pointed out by the lawyer of One of us, this initiative represents thousands of hours and euros spent in the process. All that for a result no better than a letter sent to the Commission. “While volunteers were gathering signatures, the Commission had simply decided to not take the initiative into account”.

The substance of the question asked to the Court is to know what the minimum standard to which the Court must hold itself in its response is, and if the Court can pronounce itself on the motives of the Commission’s decision. Is the simple fact that the Commission is politically opposed to the initiative reason enough to block it?

The Communication of the European Commission relatively to a European citizen’s initiative is both political and legal. The judge however, in principle, does not pronounce himself on the political relevance of the Commission. On the other hand, can the legal arguments of the Commission entirely escape the judge’s appreciation?

According to One of us, administrative and legal issues are dealt with at the time of the registration of the initiative. Once the signatures are collected, there are no more legal or political issues that the Commission can invoke.  European citizens have really taken the initiative.

According to the representative of the Commission the motives of the Commission are entirely discretionary and it has, in the spirit of the treaties, the monopoly on legislative initiative. According to him, the Court can only sanction an absence of response or a manifest mistake. “Failure has no impact on the Commission. The applicant’s challenge only mirrors their fundamental disagreement with the Commission’s assumptions. There is a right to be heard by the Commission and it must pronounce a conclusion, but nothing more”, he sententiously claimed.

It can be reasonably hoped that the Court will not follow him in this reasoning.

The Tribunal of The Court of Justice has recently pronounced itself on another initiative (Bürerausschuss für die Bürgerinitiative Minority SafePack vs. European Commission, T-646/13). In the case of this ECI, the Commission had rejected the initiative at the time of the recording of the request, and the Tribunal annulled this decision and condemned the Commission.

The Commission indeed has monopoly upon legislative initiative (articles 7 and 225 of  the Treaty on the Functioning of the European Union, TFEU). However, Article 263 of TFUE is very clear: “The Court of Justice of the European Union assesses the legality of legislative acts, of acts (…) of the Commission (…). It also controls the legality of acts by organs or organism of the Union destined to produce a legal effect regarding third parties”. Therefore, a decision that interrupts the citizen’s initiative is evidently a decision producing legal effects, of which the Court can assess the legality.  The Commission’s lawyer had much difficulty justifying the absence of decisional character in the Communication of the Commission. One of the judges asked him if he went as far as saying the Court had no control over the legality of the Commission’s decisions. The representative then tried to explain that once the initiative transmitted to the institutions, it “left” the hands of the initiators…

Paul Diamond declared himself satisfied at the end of the audience: “I have the feeling that all the arguments were well developed and that the Court is conscious that the future of the ECI is in its hands”.

The decision of the Court should be known by the end of the year.