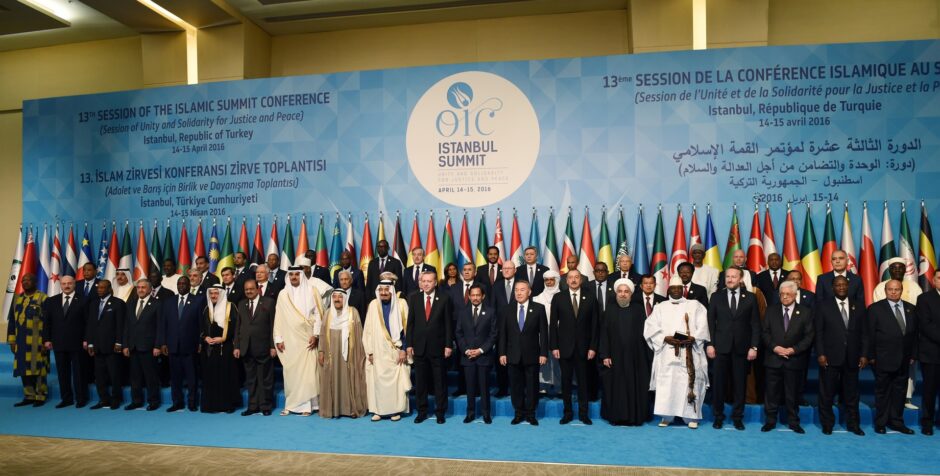 This is not the first time Mr. Ahmed Shaheed has stand out for his activism at the UN. UN Special Rapporteur on Freedom of Religion or Belief, Mr. Shaheed, had promoted abortion at the Human Rights Council session in February and March 2020. He had also denied Christians and conservatives their freedom of conscience on this issue. ECLJ denounced this extreme and intolerant relativism, by which Mr. Shaheed had overstepped and even overturned his mandate to protect religious freedom.

One year later, on the occasion of the Human Rights Council session of February and March 2021, Mr. Shaheed presented a new report: "Combating Islamophobia".[1] The Special Rapporteur "examines how Islamophobia/anti-Muslim hatred infringes upon freedom of religion or belief",[2] focusing on countries where Muslims are a minority. With this report, Ahmed Shaheed not only officially promotes the controversial concept of "Islamophobia", but also gives it an extremely broad scope. According to him, any restriction on the manifestations of Islam would be "Islamophobic" and would violate the rights of Muslims.

Islamic lobbying has always existed at the United Nations and had won several ideological victories at the turn of the twentieth century, particularly as a result of initiatives by Muslim states. With his February 2021 report, Mr. Shaheed brings this lobby back to the forefront of the international scene. This time he relies not only on states, but on "decolonialist" and racialist associations and academics, belonging to a movement often described as "islamo-left". This is not surprising, for a Special Rapporteur who displays on his curriculum vitae an award for best "Muslim Democrat",[3] which he has dedicated to his "colleagues" of the Open Society.[4]

The Special Rapporteur endorses and expands the notion of "Islamophobia"

In 1999, Pakistan, on behalf of the Organization of Islamic Cooperation (OIC), submitted a draft resolution to the United Nations Commission on Human Rights against the "defamation of Islam."[5] This text aimed at defending Islam as a religion, globally and specifically, from criticism and mockery. This project was amended, at the initiative of Germany, to condemn the "defamation of religions" in general,[6] then voted. Every year thereafter, from 2000 to 2010, a new resolution was voted by the Commission and then the Human Rights Council on "combating defamation of religions".[7]

This success of the OIC in imposing at the international level the equivalent of a blasphemy offence was fortunately reversed in 2011, when the Human Rights Council adopted a resolution abandoning the concept of "defamation of religions".[8] The resolution favours an approach consistent with major UN treaties, i.e., protecting every person and not all religious doctrines. Ten years later, Ahmed Shaheed seeks to promote a return to a comprehensive protection of Islam as a religion. The title of his report corresponds exactly to an objective of the OIC Programme of Action 2025: "Combating Islamophobia".[9]

The only point of the report, for Shaheed, is to promote the notion of "Islamophobia" and to define it in a particularly inclusive way. "Islamophobia" would explain the legal restrictions on the wearing of the Islamic veil, the urban planning rules limiting the construction of places of worship, the dissolution of Islamist associations (CCIF and BarakaCity) or the low success in studies and the high unemployment rate of Muslims in Europe.[10] The Special Rapporteur does not make any new recommendations on these subjects; the only innovation is to address them together in the framework of the same "fight against Islamophobia".

States are right to ignore these ideological recommendations

The Special Rapporteur recommends that States adopt an "inclusive process" and a "non-legal tool" against Islamophobia, to be used for all public policies.[11] A "working definition " of Islamophobia, as a phenomenon to be fought, must fuel every policy decision.[12] More precisely, for Ahmed Shaheed, the States must respect and make respect Islam, as a "religion", and must value the importance of the Muslims in the "Western civilization".[13] Currently, a state and cultural hostility to Islam is said to rule in the West.

This report, "Fighting Islamophobia", has no binding value. It is a report under the special procedures of the Human Rights Council, whose role is to provide information and recommendations to States. Moreover, Ahmed Shaheed, in advising the promotion of the Islamization of the West, is overstepping his mandate on freedom of religion. This political promotion of an "Islamo-leftist" ideology has no connection with the international conventions elaborated under the aegis of the UN. States are therefore justified in ignoring this report, which is not committing for them, and which discredits the UN special procedures.

The texts of the Committee of Ministers of the Council of Europe are revealing of the opinion of the European States on this question. When asked by the Parliamentary Assembly of the Council of Europe (PACE) and by a member of parliament on this subject in 2011, the Committee of Ministers preferred to avoid using the notion of "Islamophobia" or else reused it but to affirm that "Islamophobia is not the predominant approach of non-Muslim Europeans towards Muslims".[14] Ten years later, states are even more aware that this notion, imposed by Islamists, has no analytical value.

Criticism and rejection of Islam are part of freedom of thought

The ECLJ did not wait for the exaggerations of the current Special Rapporteur to criticize the very notion of "Islamophobia" (see our 2010 report in French). It is based on the false idea that any opposition to Islam is reducible to a "phobia" - that is, an irrational and pathological fear - or a feeling of "hatred". However, the choice not to adopt and therefore to reject Islam can be based on rational arguments and a realistic reflection on the dangers of Islam. In the same way, because of the political and totalizing dimension of this religion, a State must be able to legitimately restrict its manifestations.

The notions of "islamophobia" or "christianophobia" are based on a naturalistic logic, i.e., on the principle that religion is part of the nature of the person. Indeed, these notions are recognized alongside anti-Semitism and thus assimilate the rejection of religions - Islam and Christianity - to racial hatred - hatred against Jews, not because of their religion but because of their supposed "race". This logic of conflating religions and "races" is contrary to the right to freedom of religion, which is based on the idea that religion is a choice, independent of a supposed "race".[15]

Let's go to the end of this reasoning: being hostile to a religion is protected by the right to freedom of thought. On the other hand, this is not the case for anti-Semitism, as for all forms of racism, which must be criminalized by the States. The purpose of this reminder is not to promote "Islamophobia" or "Christianophobia", but to make the difference between these phenomena and racism. Unfortunately, as we have already shown, the organs of the United Nations combine "Islamophobia, anti-Semitism and Christianophobia".[16]

Prior to his February 2021 report "Combating Islamophobia," Ahmed Shaheed had already published a report entitled "Combating Anti-Semitism" in September 2019.[17] Archbishop Ivan Jurkovic, the Holy See's permanent observer in Geneva, considered Ahmed Shaheed's focus on certain groups "to the exclusion of others" to be "divisive."[18] A former Special Rapporteur on racism, Doudou Diène, had pointed out, " strategies to combat anti-Semitism, Christianophobia and Islamophobia should promote equal treatment of these phobias and avoidance of any prioritization."[19]

It is true that at the UN, the two notions of anti-Semitism and "Islamophobia" are systematically associated with "Christianophobia", as three "phobias" to be treated on an equal footing. For the sake of consistency, after "Combating anti-Semitism" and "Combating Islamophobia", will Ahmed Shaheed soon write a report entitled "Combating Christianophobia"?  If so, the ECLJ will be able to present Mr. Shaheed with a number of documents on the persecution of Christians, whose religion is the most persecuted in the world.

[3] Ahmed Shaheed's official CV, as submitted by the UN, can be downloaded here.

[4] Center for the Study of Islam and Democracy, "FM receives Muslim Democrat of the Year Award" (online article).

[15] International Covenant on Civil and Political Rights, 16 December 1966, article 18 §1: the right to freedom of religion "shall include freedom to have or to adopt a religion or belief of one's choice".