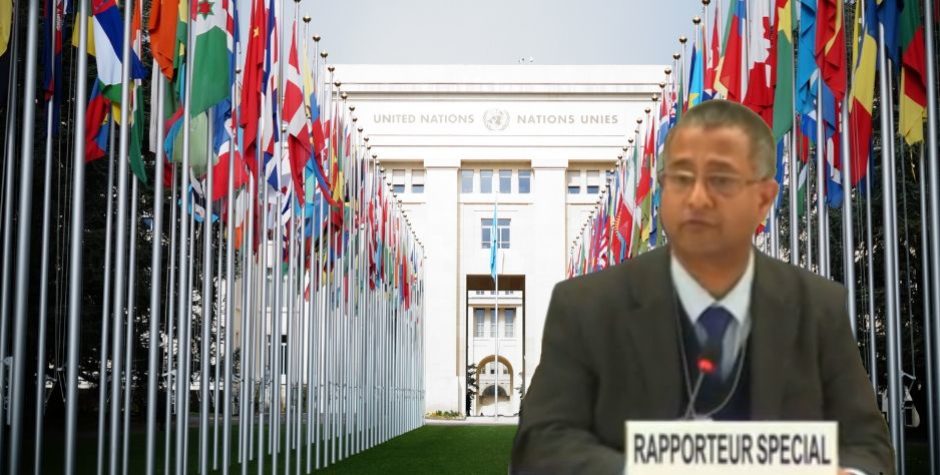 No freedom of religion for conservatives

The United Nations (UN) Special Rapporteur on Freedom of Religion or Belief, Mr. Ahmed Shaheed (Maldivian), presented a new report to the Human Rights Council during the March session.[1] The topic of his report was: “gender-based violence and discrimination in the name of religion or belief.”

The Special Rapporteur had already addressed this issue. Several practices were then legitimately denounced: female genital mutilation, marital rape, early and forced marriage, polygamy[2]. In this new report, however, Ahmed Shaheed sets aside these objective attacks on human dignity and focuses exclusively on so-called “sexual and reproductive rights”.

While it is not the first time the UN take a pro-abortion stance, this report reveals an equally disturbing problem. Ahmed Shaheed’s text is a dramatic shift in the protection of the right to freedom of religion. This shift raises deep institutional, legal and philosophical issues in this regard.

The Special Rapporteur exceeds his mandate

The Special Rapporteur has a mandate from the UN Human Rights Council to contribute to the “protection, promotion and universal implementation of the right to freedom of religion or belief,”[3] in particular by encouraging the adoption of measures and identifying obstacles to the enjoyment of this right.[4] To this end, its role includes the implementation of the Declaration on the Elimination of All Forms of Intolerance and of Discrimination Based on Religion or Belief, proclaimed in 1981.[5]

Nevertheless, in this report, the protection of freedom is subordinated to Mr Shaheed’s personal conception of gender equality. The Special Rapporteur gives a general reflection on societies, presented as indisputable, and denies the right of believers not to share this vision. Instead of defending an equal right to freedom of religion for men and women, he wants to impose his vision of equality to all religions. Some Churches denounced at the Human Rights Council an “attack on religious freedom, the very reality he is supposed to defend.”[6]

A personal view on all religious doctrines

The right to freedom of religion has two dimensions: the freedom to have or adopt a religion (or belief) and the freedom to manifest it. The former is absolute, while the latter is subject to restrictions. That is why international bodies do not take a stance on the validity or truthfulness of doctrines to which persons adhere. They try to keep a neutrality regarding the core content of religious doctrines and they only deal with the public manifestation of religions, to possibly adopt some restrictions.

On the contrary, Mr Shaheed gives his personal view on the doctrine and organizational structure that religions should adopt. According to him, international law should promote democracy within religions, with a right for believers “to take part on an equal basis in the process of defining [their] community.”[7] He also asks governments to “publicly condemn (…) the perpetuation of harmful gender stereotypes” within religions.[8] This report thus denies the Churches’ right to autonomy and their right to define their own rules and doctrines.

A stance against conscientious objection

The report shows a disturbing moral relativism. Not only does it promote abortion, but it equates legal restrictions on this practice with the penalty of stoning for adultery. In both cases, these laws would constitute a “discrimination” against women and would be based on “patriarchal interpretations of religious doctrine.”[9] Therefore, Mr. Shaheed sees Christian morality and Shariah law as two similar examples of such “interpretations” that should be rejected. He does not seem to realize the crucial difference between the situation of a woman in Poland and in United Arab Emirates.

This moral relativism leads the Special Rapporteur to refuse restrictions on abortion, and even the right to conscientious objection. According to him, “One area of particular concern (…) is the use of conscientious objection by healthcare providers and institutions unwilling to perform abortions (…) on religious grounds.”[10] He also considers that European Christians in favor of laws protecting the nuclear family “[misuse] freedom of religion or belief.”[11] Mr. Shaheed refuses in fact any use of the right to freedom of religion for conservatives.

A freedom from and within religion

In this report, the Special Rapporteur rejects the freedom of religion inherited from the 1948 Universal Declaration of Human Rights[12] and from Human Rights Law. Mr Shaheed favors instead another conception of religious freedom, inherited from the French Revolution. This freedom aims at fighting against every social, political and legal impact of religions. The role of the government would then be to free individuals from religions and even to help them to act within their own religion in order to make it more liberal.[13]

If this antireligious orientation were to be confirmed at the United Nations, it would be a serious threat to the system of Human Rights protection since the post–World War II era. The freedom that the Special Rapporteur is supposed to protect is the freedom of religion (and not from or within). A full recognition of this freedom of religion implies respect for the autonomy of Churches to determine their functioning and doctrine. It also includes the right to act according to faith and morals and to promote them publicly, socially and culturally.

[3] Human Rights Council, 34th session, Elimination of all forms of intolerance and of discrimination based on religion or belief, Resolution 6/37, 14 December 2007, § 17.

[5] Ibid., § 18 c. See: United Nations General Assembly, Declaration on the Elimination of All Forms of Intolerance and of Discrimination Based on Religion or Belief, Resolution 36/55, 25 November 1981.

[6] See for example: Mgr Ivan Jurkovic, intervention at the 43rd session of the Human Rights Council, concerning the report of the Special Rapporteur on Freedom of Religion or Belief, 2 March 2020.