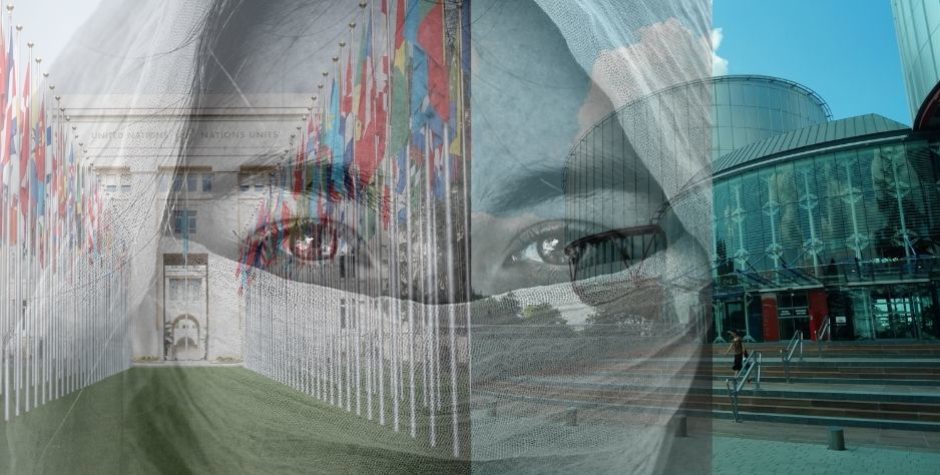 The ECHR the UN & the French Burka Ban

Ten years ago, on October 11, 2010, the French law prohibiting the concealment of one's face in the public space (n° 2010-1192) was adopted. On the occasion of this anniversary, the ECLJ proposes a reflection based on an article by Nicolas Bauer, Research Fellow, in the journal Société, droit et religion (C.N.R.S. Editions, No. June 9, 2020): "Affaire Baby-loup" and burka: the deep divergence between Geneva and Strasbourg weakens religious freedom."

This article analyses and compares the jurisprudence of two international bodies, the European Court of Human Rights (ECHR) and the United Nations (UN) Human Rights Committee, regarding religious signs and clothing. The article is based in particular on examples of French cases relating to the wearing of the full veil in the public space. While the ECHR has already validated the French law, the Committee considers that it violates the freedom of religion of Muslim women.

The 1966 International Covenant on Civil and Political Rights ("Covenant II") aims to give a binding force to the civil and political rights of the 1948 Universal Declaration of Human Rights (UDHR). This is also the ambition, at the regional level, of the 1950 European Convention on Human Rights.[1] Former President of the European Court Guido Raimondi recalled in a symposium organized by the ECLJ in September 2018: "the Convention must be considered as an instrument reflecting the resolve of States to take the first steps to ensure the collective guarantee of certain rights set forth in the Declaration."[2]

The States Parties to Covenant II have committed themselves to its terms and have entrusted the Human Rights Committee with monitoring its implementation. Some of them, including France, have chosen to sign and ratify the Optional Protocol, which also allows the Committee to receive "communications from individuals". At the regional level, the States of the Council of Europe have chosen to entrust the ECHR with the mission of ensuring respect for the rights present in the European Convention.[3]

After having exhausted domestic remedies, individuals who wish to defend their rights before an international body must choose between the UN Committee and the ECHR, which cannot be seized jointly.

With respect to the right to freedom of religion, the articles of Covenant II and the European Convention are very similar in substance.[4] Both articles protect the right to have or to adopt a religion, as well as the right to manifest it. The Human Rights Committee and the ECHR usually manage to coordinate on the interpretation of this right. However, it appears that their jurisprudence on religious signs and clothing reveals deep divergences, particularly concerning the burka in the public space.

Is the ban on the burka necessary for the "living together"?

In the S.A.S. v. France judgment of July 1, 2014, the Grand Chamber of the ECHR ruled that the law prohibiting the concealment of the face in the public space was compatible with the right to freedom of religion of Muslim women. Indeed, according to the Court, this legislation is proportionate to the legitimate goal of preserving the "living together". The ECHR's reflection on this notion was concrete and developed in particular the role of the face in social interaction.[5] Its decision showed great caution with regard to "the flexibility of the concept of 'living together' and the risk of excess that results from it".[6]

On the contrary, the Human Rights Committee has repeatedly stated that the 2010 law prohibiting the concealment of the face in the public space is contrary to religious freedom and creates a "sense of exclusion and marginalization of certain groups".[7]  In August 2015, in its concluding observations on France's fifth periodic report, the Committee classified restrictions on the "wearing of religious signs qualified as 'conspicuous'" as one of its "main concerns and recommendations".[8]  In fact, this is the only issue on which the Committee found violations of religious freedom in France.

On October 22, 2018, the Committee considered that the punishment of Muslim women who violated the 2010 law was a violation of their freedom to manifest their religion and a "form of cross-discrimination based on gender and religion".[9]  The Committee called on France to "[re-examine]" its legislation on the full veil "in the light of its obligations under the Covenant [International Covenant on Civil and Political Rights].[10]  The Committee, without explicitly citing the ECHR, clearly criticized the S.A.S. jurisprudence. It stated that "the notion of 'living together' is very vague and abstract" and that "the right to interact with any individual in the public space [is not protected] by the Covenant".[11]

The Influence of Muslim States at the United Nations

In its opinions of 22 October 2018 on the wearing of the burka, the Human Rights Committee did not hesitate to show irreverence towards the ECHR. Indeed, the Committee ruled in favour of the two Muslim women applicants, even though the Court, seized by the same women, had declared their applications inadmissible in September 2014. However, their appeals related to "the same facts and circumstances" and "the issues raised were the same".[12]  However, the Committee considered that "no arguments or clarifications as to the basis of the inadmissibility decision had been provided to [the authors] to justify the dismissal of [their] petitions on the merits".[13] It stated that "it was not possible for the Committee to determine with certainty that [these cases] had already been examined even on the limited merits" by the ECHR and that it was therefore legitimate to examine them itself.[14]

These applications had been declared inadmissible by the Court because the issue had already been decided on the merits two months earlier, in S.A.S. v. France. The fact that the Committee is examining a case that has already been judged at the ECHR is contrary to practice and above all violates the reservation made by France when it ratified the Optional Protocol to the Covenant II.[15]

The Committee's complacency regarding the wearing of the burka is probably explained by its composition. Admittedly, its experts are independent from states. However, given that each expert is nominated by the State of which he or she is a national[16] and then elected by the States parties to Covenant II,[17] it would be illusory to believe that the massive presence of Muslim States at the UN has no influence on the Committee. In this case, nearly 30% of the experts (five out of eighteen) come from member states of the Organization for Islamic Cooperation (OIC), which signed and ratified the Cairo Declaration of Human Rights in Islam (5 August 1990).[18] This legal formulation of sharia law rejects freedom of religion and states that "Islam is the natural religion of man".[19] National and religious traditions have a strong and inevitable impact on each expert's conception of religious freedom.

Ten years after the burka ban, is the debate over?

The position of the Human Rights Committee has been used by some as an opportunity to reopen the debate on the full veil.[20] On the contrary, in a resolution adopted unanimously, the French Senate invited the government "not to act on these observations [of the Committee] in order, at the very least, to preserve the national legal order relating to the wearing of the full Islamic veil in the public space".[21]

Today the question is posed in new terms with the masks of protection against the Covid-19. Not only is the ban on concealing one's face waived for health reasons, but it has even become mandatory in many places to wear a mask that conceals one's mouth and nose.

[1] See its preamble: "Being resolved, as the governments of European countries which are like-minded and have a common heritage of political traditions, ideals, freedom and the rule of law, to take the first steps for the collective enforcement of certain of the rights stated in the Universal Declaration ".

[2] Symposium " The challenge of universality Crossed perspectives 70 years after the Universal Declaration of Human Rights", Council of Europe, 10 September 2018: intervention of the President of the ECHR Guido Raimondi available in video.

[3] See Article 5 § 2 of the Optional Protocol to the Covenant II and Article 35 § 2 of the European Convention.

[4]   See article 18 of Covenant II and article 9 of the European Convention.

[15] This reservation is as follows: "France makes a reservation to article 5, paragraph 2 (a), specifying that the Human Rights Committee shall not be competent to consider a communication from an individual if the same matter is being examined or has already been examined under another procedure of international investigation or settlement".

[18] Declaration of Human Rights in Islam, drafted by the Organization for Islamic Cooperation (OIC) and adopted in Cairo on August 5, 1990, ratified by the 57 OIC member states.