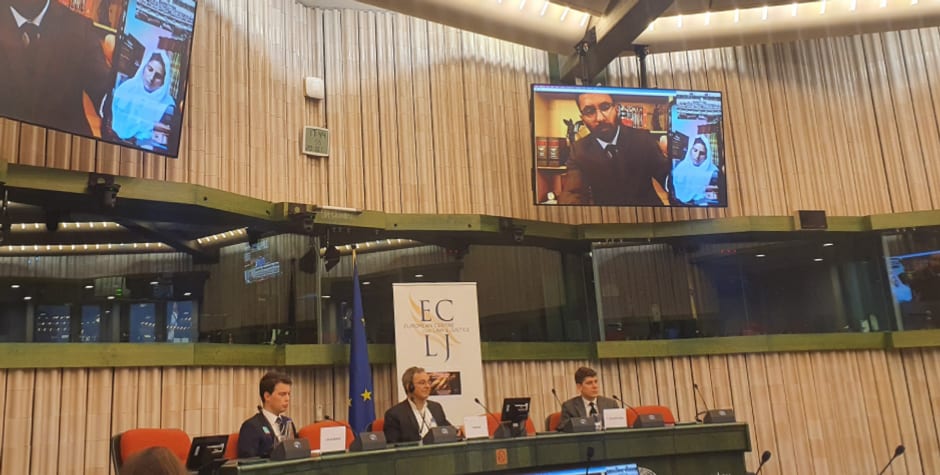 On October 20, the European Centre for Law and Justice (ECLJ) presented an important case to Members of the European Union Parliament, seeking their intervention in the case of Shahzad Masih, a young Christian man in Pakistan who has been imprisoned and facing trial for over four years regarding a false allegation of blasphemy. Shahzad was a minor at the time of his arrest, but could still face a potential death sentence for something that, even according to the prosecution’s own version of the facts, is not a crime.

Our affiliate in Pakistan has been working to defend him in court. In addition, our international legal teams have been working to highlight his case across the globe, including recently at the U.N. Human Rights Council and now at the European Union.

The EU event was organized by Mr. Thierry Mariani, Member of the European Parliament (MEP) and President of the Intergroup on Christians in the Middle East. He shared deep concern regarding the blasphemy laws in Pakistan and the injustice being done to Shahzad Masih. At least fifteen MEPs attended the event.

Christophe Foltzenlogel, an Advocacy Officer at the ECLJ, shared the overall situation of religious freedom in Pakistan. In addition to highlighting incidents of violence that result from false accusations of blasphemy, he also spoke about the recent rejection by Pakistan’s Parliamentary Committee of a bill that would have protected young minority girls and women from forced conversions to Islam and forced marriages to Muslim men.

Shaheryar Gill, advocacy officer for our affiliate in Pakistan, then highlighted one specific blasphemy case that should have never been registered in the first place. Unlike many blasphemy cases in which at least false evidence exists, this case does not contain any evidence that constitutes the “crime” of blasphemy. Yet, Shahzad Masih, who was 17 years old when he was arrested, has spent over four years in prison and faces a possible death sentence, as trial courts are known for mostly passing convictions in such cases, leaving it up to the High Court and the Supreme Court to make the final decisions. This practice leads to innocent individuals being imprisoned for many years. Asia Bibi’s case is a prime example of that. She spent about nine years in prison until the Supreme Court of Pakistan overturned her conviction (a case that the ACLJ aggressively advocated across the globe for years).

In July 2017, Shahzad was working at a local hospital as a janitor, when a Muslim co-worker named Ishtiaq Ahmad Jalali started a religious conversation, telling Shahzad about Muslim Prophets, and asking him questions about the Christian Prophets. Shahzad responded that he did not know much about religion, but would ask his father. During that conversation, Shahzad told Jalali that his father has a friend named Ali who has made derogatory remarks against the Prophet Muhammad.

Jalali became upset. He called Shahzad, his father, and his father’s friend derogatory names and left. Later that evening, Shahzad was called to a mobile phone shop across from the hospital where dozens of men from a Muslim sectarian group were present. These men were angry at Shahzad. They asked Shahzad what he said to Jalali at the hospital. Scared for his life, Shahzad told them what happened at the hospital.

Instead of looking for Ali, the group of men took Shahzad to a nearby madrassah (an Islamic religious school) and handed him over to the police, and the police filed a blasphemy case against Shahzad.

Even though the police investigation did not find any blasphemy in Shahzad’s conversation, the prosecution still brought charges and the case went to trial. During trial, all the witness stated that “Jalali began the religious conversation” and that Shahzad only stated that “his father has a friend named Ali, who uses derogatory remarks in the respect of Holy Prophet.”

Most importantly, the investigating officer testified in court that, “during my investigation, I did not declare Shahzad Masih guilty.” He further testified that Jalali belongs to a religious sectarian group. He is the one who started the religious conversation. He noted that Shahzad is immature and underage and has no knowledge of his or other religions. The investigating officer also stated that an eye-witness did not think that Shahzad made any derogatory remarks against the Prophet.

This is the prosecution’s entire case. What Shahzad said does not constitute blasphemy even under the broadly written section 295-C of the Pakistan Penal Code, which punishes any insulting remarks against the Prophet Muhammad with the mandatory death penalty.

Trial courts in Pakistan are known to pass the buck to the appellate courts on blasphemy cases. It is well-known that trial courts in Pakistan often convict those accused of blasphemy, usually because of pressure from angry mobs. If the trial court convicts him, Shahzad will spend about four to five more years in prison until the High Court hears his appeal. If the High Court upholds Shahzad’s conviction, he will spend another five years in prison until the Supreme Court hears his appeal.

Shahzad’s mother was also able to attend the event through video conferencing. She said that “after spending over four years in prison, Shahzad has lost all hope. He thinks he will be convicted.” Shahzad’s mother’s intervention was really moving. The MEPs were able to ask her questions, and the attendees paid their undivided attention to her.

We hope that the trial court in Pakistan will do the right thing, not succumb to the social pressure, and release Shahzad. We will continue working in Pakistan and across the globe to seek true justice for Shahzad. We will also keep you up to date as this case progresses.