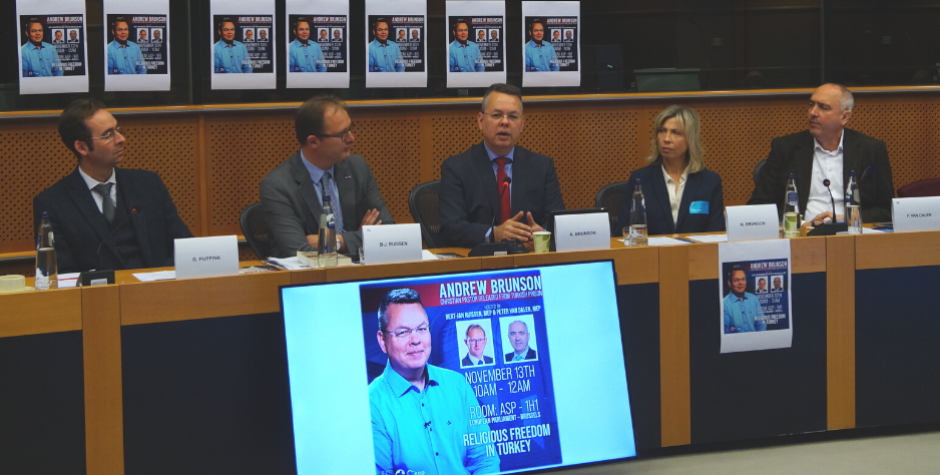 The European Centre for Law and Justice (ECLJ) invited Pastor Andrew Brunson and his wife Norine for a two-hour conference at the European Parliament on November 13th, 2019, during the plenary session in Brussels, and to meet MEPs from all Europe.

Andrew Brunson told his moving story of a Pastor living in Turkey since 1993, imprisoned for “terrorism” for more than two years (2016-2018), during which he was a political pawn for the Turkish President Recep Tayyip Erdoğan. He presented his book recently published: God’s Hostage: A True Story of Persecution, Imprisonment, and Perseverance.

The conference was hosted by two MEPs committed to promoting religious freedom in and outside Europe: Bert-Jan Ruissen (ECR) and Peter van Dalen (EPP). The room was full of MEPs, staff and journalists interested by a story known all around the world. The ECLJ presented them with its report on Christians’ Religious Freedom in Turkey.

After the conference, Pastor Brunson was received as special guest in two meetings of political groups gathering more than 30% of the MEPs. He gave a speech at the European Conservatives and Reformists Party (ECR) to explain how he preached the Gospel in Turkey proclaiming that Jesus Christ was the unique mediator of salvation. Andrew Brunson blessed the MEPs from ECR group and answered their questions about the current political situation in Turkey. In the European People’s Party (EPP) group, Andrew Brunson personally met the President, Manfred Weber (Germany), and the Hungarian member György Hölvényi. The French MEP François-Xavier Bellamy publicly thanked Andrew Brunson and declared that it was essential to “defend this will of human spirit to go to the truth.”

Andrew and Norine Brunson expressed all their gratitude for the resolution voted by the European Parliament “[urging] the Turkish Government to release Pastor Andrew Brunson and to allow him to return home” (2018/2527(RSP)). They also especially thanked the 98 MEPs who sent an open letter to President Erdoğan during his detention. These MEPs had especially protested against “the fact that the indictment associates “Christianization” with terrorism” (more details below). Andrew and Norine Brunson also talked with ECLJ members about how to continue fighting for persecuted Christians at the United Nations and before the European institutions. The MEPs were encouraged to recreate the Intergroup on Freedom of Religion or Belief and Religious Tolerance (FoRB & RT), which did a great work during the last legislature.

In 1993, Andrew Brunson travelled to Turkey to serve as a pastor. What followed was a string of challenges, but also successes in starting new churches in a place where many people had never met a Christian.

But, in 2016, Andrew and his wife were arrested. Though Turkey quickly released his wife, Andrew Brunson was imprisoned. He was accused of being a spy and being among the plotters of the 2016 Turkish coup d’état attempt. His indictment equated “Christianization” with terrorism and stated that the Christian faith endanged Turkey’s unity. It mainly relied on “anonymous witnesses” and on “secret documents."

A successful European and international mobilization for Andrew Brunson’s release

In February 2018, the European Parliament voted a resolution “[urging] the Turkish Government to release Pastor Andrew Brunson and to allow him to return home” (2018/2527(RSP)). In March, we invited Pastor Brunson’s daughter to share her personal testimony before the Human Rights Council in Geneva. In April, two-thirds of the U.S. Senators addressed a bipartisan letter to President Erdoğan. 24 members of the Parliamentary Assembly of the Council of Europe also signed the written declaration “Turkey must free Pastor Brunson” (No. 651, Doc. 14492). Over 600,000 people from all over the world also rallied for Pastor Brunson's release signing the petition demanding the same.

In July 2018, the ECLJ gathered 98 Members of the European Parliament (MEPs), from all political groups and 21 countries. They sent an open letter to remind President Erdoğan of “the European and International commitments of the Republic of Turkey in regard to freedom of religion, to the prohibition of arbitrary detention, and to the right to a fair trial.” They especially protested against “the fact that the indictment associates “Christianization” with terrorism, considering the Christian faith as endangering Turkey’s unity, while Christianity has been peacefully present in this land long before the actual Republic of Turkey.”

As a result of filing a complaint with the United Nations Working Group on Arbitrary Detention, they published an opinion in February 2019 and found Turkey guilty of arbitrarily detaining Pastor Brunson. According to the Working Group, “the arrest and detention of Mr. Brunson was the result of him being targeted by the Turkish authorities on the basis of his nationality and faith.” That is why Andrew Brunson has a “right to compensation and other reparations, in accordance with international law.”

The detention of Pastor Brunson for over two years has thus become an emblematic case of the situation of religious freedom in Turkey.