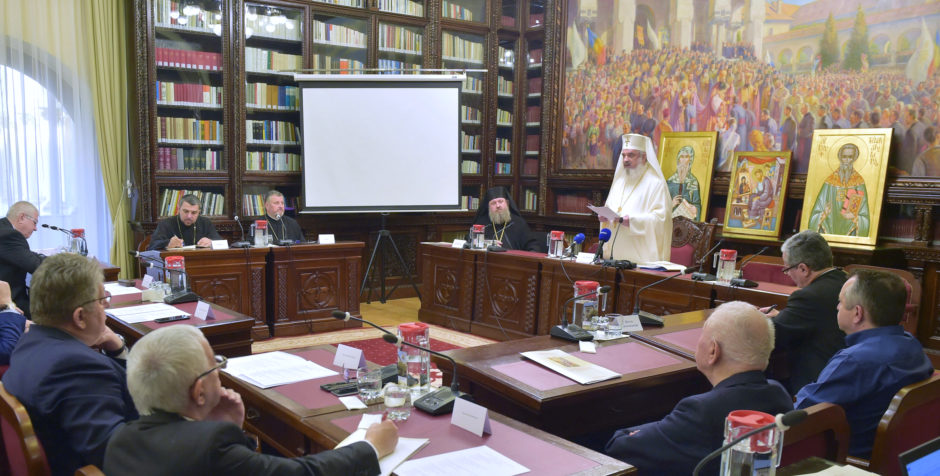 The preservation of the Patrimony of the Bucharest Roman Catholic Church

On 10 October 2014, the Third Section of the European Court of Human Rights communicated to the Romanian Government the case of Archdiocese of Bucharest v. Romania (application no. 3524/10), requesting it to submit written observations on the case by 5 February 2015.

This case concerns the non-execution of four final judgments (Articles 6 of the Convention-fair trial and 1 of Protocol no. 1 to the Convention-protection of property) ordering to the Romanian authorities to annul an illegal building permit and to demolish a 75 meters office tower illegally constructed at 1, 90 meters from the wall surrounding the St. Joseph Roman-Catholic Cathedral in Bucharest. The office tower was built by S.C. Millennium Building Development S.R.L. (“Millennium Building”), a private company, which also addressed an application to the ECHR concerning those procedures, the Third Section rejecting it by a decision of 10 April 2012.

However, what is at stake in this application goes beyond the fair trial and the property issues under the Convention. It is about the preservation of the cultural and spiritual identity and patrimony of the Catholic minority in Romania (5% of the population) and their transmission to the future generations. It is also about the visibility of the Catholic Church in Romania. Saint Joseph Cathedral was built between 1873 and 1884 and together with the Bishop’s Palace was declared historical monument since 1955. It is the symbol of the Roman Catholic Church in Bucharest and for 125 years the building was dominating the place on which it is situated and its surroundings. All the neighboring buildings are lower than the Cathedral. This is why, in Romania, the tolerance of the Romanian authorities afforded to Millennium Building and their support to illegal acts were perceived and compared with the destruction of the patrimony of the cults during the communist regime, which aimed to destroy the memory and the cultural and spiritual identity of the Romanian people. During the communism, churches were demolished to build new residential districts, moved behind the communist blocks or nationalized by the State, in the case of catholic and protestant Churches.

Coming back to the facts of the case, in January 1998, Millennium Building bought a few parcels of land near the Cathedral. In November 1998, the Ministry of Cults and the Department of the historical monuments confirmed to the private company that the land within a radius of 100 meters from the Cathedral is also protected by the law on historical monuments and therefore any construction on this land should receive the approval of the two State entities and of the Church. In July 2001, fearing for the structural frame of the Cathedral, the Bishop retracted his informal and conditional agreement given in November 1999 to Millennium Building for the construction of an office building and informed the authorities about this retraction. In the same year, the structure of the Armenian Church in Bucharest was affected by the construction of a similar tower near it.

In February 2006, the Mayor of Bucharest issued a building permit to Millennium Building for a 75 meters office tower and in March the company started the construction. In a Report of 10 May 2006, the Building Inspection found legal and technical irregularities in the construction and notified the Municipality and the Prefect of Bucharest to suspend the authorization of construction and to introduce court actions against the private company. In its Report, the Inspection observed that the company did not have, inter alia, the Ministry of Cults and the Public Works agreements, that the architectural project previously approved by the authorities was modified and that the company did not carry out a technical expertise on the state of the surrounding buildings. On 29 May 2006, considering the project dangerous, as the weight of the building increased with 30% due to the new architectural project, the engineer of the building renounced to work on it and notified the Inspection on the risks. Other experts expressed concerns about the project too.

By a final judgment of 3 November 2010, the Court of Appel of Suceava annulled the building permit.

By a final judgment of 1 November 2012 the Court of Appel of Bucharest confirmed the decision of the Mayor of Bucharest, issued on the 1 September 2011, by which Millennium Building was obliged to take steps within ten days in order to demolish the tower.

By a final judgment of 27 June 2012, the High Court of Justice ordered the State authorities to answer the request of the Diocese to start the procedure of public expropriation of the land on which the tower was built.

By a final judgment of 23 January 2013, the Court of Appeal of Ploiesti ordered to the Bucharest municipality to take all the administrative measures to offer the Diocese a restitution in integrum, bringing the land surrounding the Cathedral in its previous state. The four final judgments remained non-executed without any objective reasons from the State authorities.

Although, it is hard to say whether the demolition of the office tower will damage more the structure of the Cathedral than its use, ECLJ hopes that the ECHR will send a clear message that the rule of law and the cultural and spiritual patrimony of the Romanian Catholic minority should be respected.