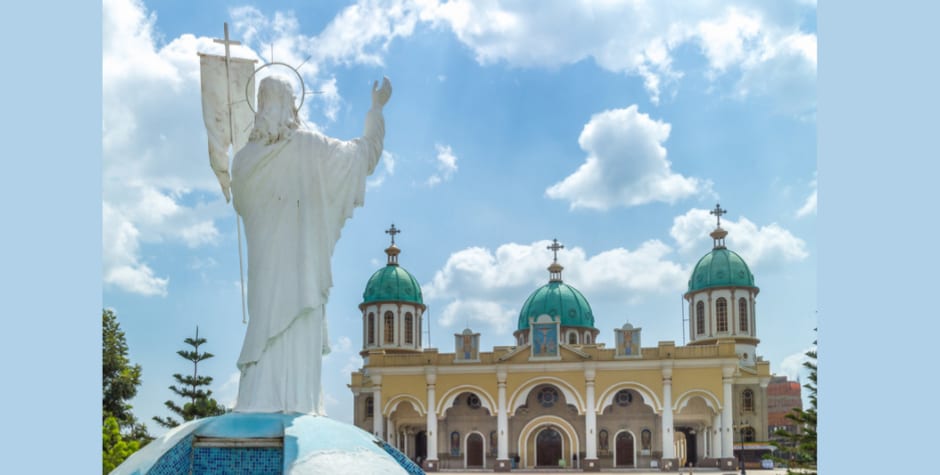 A recent report by the Institute of Foreign Affairs and Foreign Trade in Budapest highlights the serious consequences of the ongoing civil war in Tigray, Ethiopia, for the civilian population and in particular for Christians, reports Louis-Marie Bonneau, Research Fellow at the European Centre for Law and Justice (ECLJ).

Article published in French in Conflits & Causeur on July 2021.

On 4 March 2021, the UN High Commissioner for Human Rights, Michelle Bachelet, called for an independent investigation into possible "war crimes and crimes against humanity" committed in Ethiopia's Tigray regional state,[1] where over 90% of the population is Christian, mainly Orthodox. These crimes are being committed in the context of the civil war that broke out in Ethiopia in November 2020, between the Ethiopian National Defence Forces (ENDF) and the Tigray Defence Forces (TDF). In a study published by the Budapest Institute of Foreign Affairs and Foreign Trade, Philippe Pellet of the Budapest Research Institute for Religion and Society analyses the causes and consequences of this civil war.

Ethiopia is a multilingual country with more than 80 ethnic groups and a population estimated in 2020 at 114 million inhabitants. The country was until recently a factor of regional stability in the midst of countries at war or in crisis: the two Sudan in the west, Eritrea in the north and Somalia in the southeast. It is the second largest contributor of troops to the United Nations. This stability made Ethiopia the second largest country hosting refugees in Africa. At the beginning of 2020, it was hosting over 735,000 refugees, of which 100,000 had arrived in 2019. 99% of the refugees come from the four neighbouring countries: South Sudan (329,000), Somalia (191,600), Eritrea (139,300) and Sudan (42,300).[2]

Based on the 2007 census, Christians represent 62.8% of the population (43.5% Orthodox, 18.6% Evangelical and 0.7% Catholic). Muslims, mostly Sunni, represent 33.9% of the population. The Ethiopian Orthodox Tewahedo Church and the Ethiopian Supreme Council for Islamic Affairs are recognised as official religions in Ethiopia. The Tigray region has been Christian since the fifth century. According to Ethiopian traditions, the city of Aksum, a religious centre of the Ethiopian Orthodox Church in Tigray, would have been the site of the Ark of the Covenant deposited at the Church of St Mary of Zion by Menelik, the legendary son of King Solomon and the Queen of Sheba. This Christian heritage explains the current richness of the Orthodox heritage in the region, where there are a large number of ancient churches and monasteries, some of them perched on high cliffs. It is in this holy place that Ethiopian federal troops and Amhara militias (close to the Ethiopian army) are accused of having killed, on 15 December 2020, more than 750 people who were gathered in the Cathedral of St. Mary of Zion in Aksum.[3]

Exactions against civilians and religious, destruction of holy places

In a video posted on Twitter on 8 May 2021, Abune Mathias I, Patriarch of the Tawahedo Orthodox Church of Ethiopia, denounced an ongoing genocide in Tigray, without indicating who was responsible for it. Although the reliability of information from Tigray may be questioned due to the interruption of internet and telephone communications and the ban on journalists entering the area, many accounts of abuses committed against civilians have been reported by survivors and relayed by several NGOs. The survivors report in particular massacres of civilians and ecclesiastics, numerous rapes, as well as looting and damage to holy places. According to most of the testimonies, these abuses were committed by Eritrean soldiers and federal Ethiopian forces. In Irob Woreda (northern Tigray), reliable sources report that many civilians of the Irob ethnic group, who are mostly Catholics, were executed by Eritrean forces, and that people fled into the mountains to save their lives.

The Catholic Eparchy (Diocese) of Addigrat also reports extensive looting and damage to public and private buildings by the Ethiopian Federal Government and Eritrean forces. Buildings owned by the Eparchy, such as the priests' residence, St Mary's Agricultural University in Wuqro, the clinic and the school in Edaga Hamus were damaged and completely looted. The non-governmental organisation Europe External Program with Africa (EEPA) also collected the testimony of a monk describing the attack on the monastery of Debre-Damo with heavy artillery by the Eritrean army in January 2021. Soldiers attacked the monastery in the belief that leaders of the Tigray People's Liberation Front (TPLF) were hiding there. The Al-Nejashi mosque in Negash, one of the oldest in Africa, was also damaged by bombings.

The destabilisation of the area

Tigray is one of the nine regional states in the Federal Republic of Ethiopia, bordering Eritrea. In 1952, the UN created a confederation between Eritrea and Ethiopia under the sovereignty of the Ethiopian crown, but the centralizing will of the Ethiopian emperor led ten years later to the annexation of Eritrea. This annexation, which was deemed illegal under international law, was abolished in 1993 after a referendum on Eritrean independence, the results of which were immediately recognised by the government in Addis Ababa. Five years later, in 1998, war broke out between the two countries, mainly due to disputes over the control of border areas. This war resulted in between 70,000 and 100,000 victims until the signing of the Algiers Agreements in 2000. Despite these agreements, Ethiopia did not recognise the borders established in 2002 by the border commission set up following the Algiers agreements, and the two countries remained enemies until the current Prime Minister Abiy Ahmed came to power in 2018. In power in Eritrea since 1991, Isaias Afewerqi imposed a dictatorship considered one of the most repressive in the world. In its global index on the persecution of Christians, Open Doors ranks Eritrea as the 6th country with the highest persecution of Christians. This situation has driven many Eritreans into exile to Ethiopia and in particular to Tigray (according to the UNHCR, by 2020, 100,000 of them would be living in refugee camps).

In 2018, Abiy Ahmed, a Pentecostal Christian, became Prime Minister of Ethiopia. In July 2018, he signed a declaration of peace and cooperation with Eritrean President Isaias Afewerqi that ended the state of war between the two countries, which earned him the Nobel Peace Prize a few months later. The clauses of this treaty, which agreed to the return of some Tigrayan territories to Eritrea, was one of the elements that contributed to the escalation of political and ethnic tensions between the new Prime Minister and the Tigrayan People's Liberation Front (TPLF). In 2020, the central government's decision to postpone national elections because of the pandemic heightened these tensions, as the TPLF saw it as a move by Abiy Ahmed to remain in power. The maintaining of elections in Tigray against the decision of the central government led to the mutual lack of recognition of legitimacy between the Addis Ababa government and the newly elected TPLF-led government in Tigray. This led to a breakdown in relations between the TPLF leadership and Addis Ababa, and then to the outbreak of the armed conflict in early November 2020. These tensions were marked, as we explained, by serious exactions against civilians and ecclesiastics, as well as the destruction and looting of church property, including holy places.

USAID estimated that as of May 2021, 5.2 million people were in need of humanitarian assistance out of an estimated total population of 6 million. 350,000 people were also at risk of starvation and this number is growing. UNICEF also warned at the end of June 2021 that at least 33,000 severely malnourished children in hard-to-reach areas faced an imminent risk of death if emergency aid were not delivered quickly.[4] Yet in an interview with BBC-News on 21 June 2021, Abiy Ahmed denied the existence of famine in Tigray.[5] It is therefore feared that Ethiopian forces will not relieve their pressure on the area and will maintain their obstruction. The ongoing major humanitarian crisis in Tigray and neighbouring regions, combined with the effects of Ethiopia's current deep economic crisis, could have very serious consequences for the population, which could be forced to flee.

[3] The very one that would have welcomed the Ark of the Covenant.