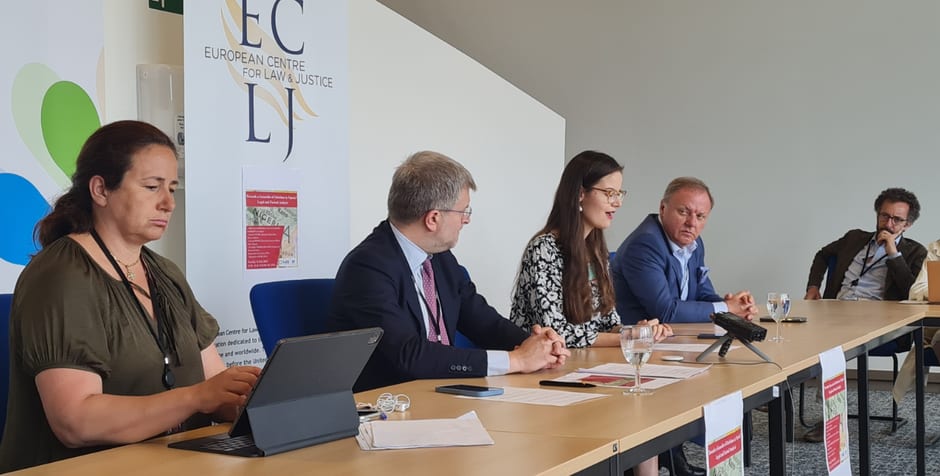 Christians in Nigeria: A Genocide?

On Tuesday 12 July 2022, the ECLJ organised a conference in the European Parliament in Brussels with the Intergroup on Freedom of Religion or Belief & Religious Tolerance to give a legal and factual response to this serious situation of Christians in Nigeria. Members of the ECR and EPP groups were present in person or from a distance, such as the co-chairs of the Intergroup Carlo Fidanza and Peter van Dalen, Margarita de la Pisa Carrión, Sergio Berlato and Miriam Lexmann. Many parliamentary assistants and NGO representatives were also present. Several personalities took turns to denounce to the MEPs the situation that Christians are experiencing in this country. Among them were Bishop Jude Arogundade, Nigerian bishop of the diocese of Ondo since 2010, Patrick Victor, Director for France and Belgium of the NGO Open Doors and Marguerite Saché, Associate Researcher at the European Centre for Law and Justice. Marguerite Saché is a specialist in international criminal law and gave a legal analysis of the crimes committed in Nigeria in terms of treaties and the case law of the International Criminal Court.

Here is the ECLJ's intervention in English during this event:

Nigeria is experiencing an upsurge in ethnic and religious attacks, particularly in the north of the country. In Owo, southern Nigeria, on 5 June 2022, in the middle of Whit Sunday mass, an attack on a church left at least 50 people dead. On 13 May, a young Christian woman was stoned and burned after being accused of blasphemy. These killings are not isolated, as the NGO Open Doors had counted 4,650 Christians killed in Nigeria for the year 2021. This represented almost 80% of the murders of Christians worldwide. Similarly, in 2021, the International Society for Civil Liberties and the Rule of Law (Intersociety) had counted 3,000 Christians being abducted while 300 churches and ten priests had been attacked. As all the participants in this conference demonstrated, it appears that the situation of Christians in Nigeria is deteriorating more rapidly, and that the violence initially localised in the North is also tending to spread to the South. Bishop Jude Arogundade added that there are ethno-religious reasons for these alarming events. The lack of reaction from the local authorities further exacerbates the rise towards a radicalisation of the violence, raising fears of genocide.

In February, the ECLJ warned the UN Human Rights Council about the gravity of the situation of Christians in Nigeria. On 18 May, in the European Parliament, MEP Jean-Paul Garraud of the ID group also intervened to ask for a debate on Christianophobia and in particular on the case of the young Nigerian student stoned and burned by Islamists. 244 MEPs voted against, preventing the debate from taking place. After the Whit Sunday massacre, the European Parliament finally agreed to hold the debate, after the ECR group also requested it. François-Xavier Bellamy also denounced the silence of European countries towards this situation on 8 June in the European Parliament. In May, the ECLJ sent again a written statement to the UN Human Rights Council urging the international community to do everything in its power to stop the violence and provide assistance to thousands of displaced Nigerians. In 2020, the Prosecutor of the International Criminal Court (ICC) announced the closure of the preliminary examination of the situation in Nigeria, "having concluded that there was a reasonable basis to believe that war crimes and crimes against humanity were committed". Since then, no investigation has been opened, although this should be the next step in the judicial process.

The ECLJ will continue to lobby before international institutions to defend the rights of persecuted Christians in Nigeria.

You can watch the full event of the FoRB&RT Facebook page here.

The UN gives rise to legitimate fearsBy Louis-Marie Bonneau1644917040000
As the 49 th session of the Human Rights Council gets underway, the UN seems to be in a bad shape. Louis-Marie Bonneau, Fellow researcher at the European Centre for Law and Justice (ECLJ), analyzes...
Read More

Threats to Tigray's Religious HeritageBy Louis-Marie Bonneau1644244260171
The situation in Tigray will be on the agenda of the 49th session of the UN Human Rights Council in February. In its resolution 47/13 , voted by Argentina, Austria, Bahamas, Brazil, Bulgaria, Czech...
Read More
More Related Articles