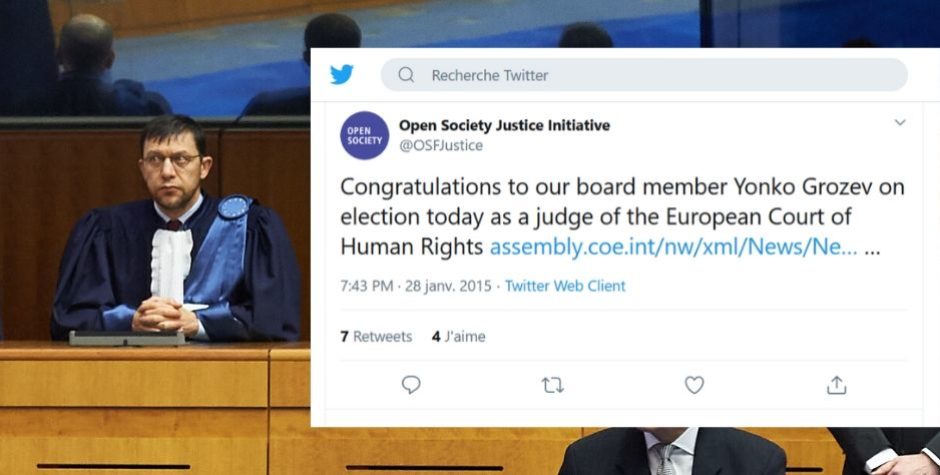 Following the ECLJ Report: the Bulgarian judge in the hot seat?

The Bulgarian judge in the hot seat?

Following the publication of our report on NGOs and the judges of the European Court of Human Rights, many newspapers around the world have picked up some of our information.

Several MPs of different nationalities have officially submitted oral and written questions to their governments. In many European countries, these revelations have caused a certain amount of astonishment. This is the case in Bulgaria, where the last two judges elected to the ECHR are particularly implicated.

Indeed, as detailed in our report, the last two Bulgarian judges, Zdravka Kalaydjieva (2008-2015) and Yonko Grozev (since 2015), have sat in many cases brought by non-governmental organisations with which they have collaborated or in which the latter were third parties (see here, pages 5 to 8).

According to the French weekly magazine Valeurs Actuelles, in an article published on 22 March 2020, in Bulgaria :

the local media echoed the report, which brought to light Grozev's links with George Soros, unknown to the general public, as well as those of his predecessor in this position, Zdravka Kalaydjieva. Above all, however, they refer to his breaches of judicial principles as a judge at the ECHR, as he sat in cases brought or supported by the NGO he himself had founded. Finally, the murky circumstances of his appointment also resurface. His election to this prestigious post was indeed organised by the former government. Judge Kalaydjieva, his predecessor, left her judge office prematurely, which, according to some media reports, would be the consequence of a request by the government at the time, wishing to "place" a judge (elected for 9 years) before a possible political change.

The composition of the selection committee which appointed Grozev to sit on the ECHR was also open to debate. Among the nine members of the committee, three are former colleagues of the candidate finally selected. . .

Grégor Puppinck, director of the ECLJ, was indeed solicited by several Bulgarian media, including the main television channel Nova TV, which interviewed the Bulgarian Minister of Justice.

According to Valeurs Actuelles :

The Bulgarian press is not the only one to have been moved by the revelations of Grégor Puppinck: the Minister of Justice himself, Danail Kirilov, made a public statement in which he expressed his concern about the situation revealed by the Puppinck report. "We have come to the point where this time it is French lawyers who are informing us about the situation in Bulgaria," he explained. According to Kirilov, a lawyer who has acted before the ECHR in such an important case as the Kolev v. Bulgaria should not be able to be appointed as a judge there. He added that Grozev could be dismissed following a revelation such as that of the European Centre for Law and Justice.

The ECLJ will file its official petition with the Parliamentary Assembly of the Council of Europe in June 2020 asking for measures to be taken to avoid such conflicts of interest between judges and NGOs. Until then, we encourage you to sign that petition below: