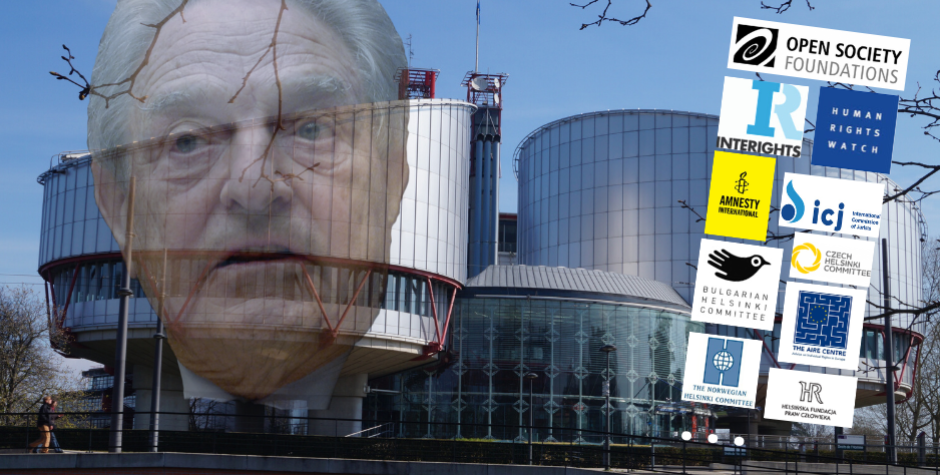 Soros' hold on the European Court of Human Rights: the ECHR persists and signs

Soros' hold on the ECHR confirmed

Two months after its publication, the European Court of Human Rights (ECtHR) has finally responded to the ECLJ report which revealed the existence on a large scale of conflicts of interest between 18 judges of the Strasbourg high court and 7 NGOs funded by Georges Soros, including the rich and controversial Open Society. But it is in its own way that the ECtHR has responded: not by contesting indisputable facts, the revelation of which caused a scandal throughout Europe; nor by adopting the necessary measures to prevent the recurrence of such conflicts of interest; still less by sanctioning these judges, as any national judicial disciplinary authority would have done. It responded in the opposite direction: by electing the most controversial judge, Bulgarian Yonko Grozev, to the important post of "section president".

Indeed, Grozev has spent his entire career as a lawyer and activist in NGOs close to George Soros or financed by him, until he became one of the world leaders of the Open Society branch specialising in the use of judicial institutions for political purposes (the Open Society Justice Initiative). He became known, inter alia, as a lawyer for a group of punk women (Pussy Riot) who committed a sacrilegious act in Moscow Cathedral.

Already in 2014, the modalities of his nomination in Strasbourg had been challenged, as three members of the Bulgarian selection committee were his NGO fellows. A complaint to the Council of Europe by a local organisation about the irregularity of the selection procedure was dismissed.

It was under these conditions that this activist, who had no experience as a magistrate (like the majority of the judges in Strasbourg), became one of the 47 judges of the European Court of Human Rights. Shortly after his election, his new colleagues ruled in his favour in the Pussy Riot case and ordered Russia to pay him, as is customary, substantial compensation.

As a judge, he was seized of cases which he had brought before the ECHR himself as a lawyer, or which had been brought by his former NGOs. While in 9 of these cases he renounced sitting as a judge as was his duty, he still participated in the judgment of at least 10 other cases brought or supported by NGOs which he himself had founded or directed until recently. (A list of these cases is available in the annexes to the report).

Such conduct constitutes a serious and repeated breach of a judge's basic ethical obligations. In any State governed by the rule of law, the author of such breaches would be liable to severe disciplinary sanctions. Moreover, following the publication of the report, the Bulgarian Minister of Justice publicly raised the possibility of Yonko Grozev's dismissal, while pointing out that it was for the ECtHR to decide. Yonko Grozev defended himself by attacking the ECLJ and declaring it impossible to dismiss him, as all the judges referred to in the report would then have to be removed from office. It would thus be as if he were protected by the other judges involved.

Clearly, his election as section president proved him right. The former judges who had read and approved the report before its publication had warned the ECLJ of this likely mutual defence reaction. Four of the nine judges of the section to which the Bulgarian belongs are, moreover, among the 18 judges implicated.

Thus elected, Yonko Grozev will head one of the five sections of the Court, will exercise general management powers within the Court, and will systematically sit in the most important cases. He will also, inter alia, be the judge of deontology in his section, and will decide alone, on a case-by-case basis, whether to invite, allow or refuse the intervention of NGOs in cases.

The ECHR is not subject to any control

The ECtHR is the highest judicial body in Europe. It was designed to require national political authorities to respect certain moral values. In doing so, it is not subject to any counter-power or supervisory authority. It has the final word.

The hypothesis that "The Conscience of Europe", as it calls itself, may be lacking in conscience, may fail in its deontological obligations and be misused for ideological purposes has not been considered. However, it has to be said that in some areas its judgments have gone far beyond what States have committed themselves to. The way in which the Court reacted to the publication of the report showed, moreover, that it was not capable of regulating itself properly. Moreover, the election of Yonko Grozev as Section President confirms the strength of certain networks of influence within the ECtHR.

Restoring the integrity of the European Court

The Parliamentary Assembly of the Council of Europe, which is responsible for the final election of the judges of the ECHR, could also be seized of this matter by MPs. This would make it possible to carry out a parliamentary inquiry and to recommend to the ECtHR the adoption of the necessary measures to ensure the impartiality of its judges. The ECLJ report suggests in this respect, inter alia, that the Court should apply to itself the rules which it imposes on national courts in this area. A proposal to this end will also be tabled by the ECLJ to the Bureau of the Parliamentary Assembly, following the formal petition procedure allowing any person to request the inclusion of a subject on its agenda (this petition can be signed on this page).

It is appropriate to act, not in a spirit of ideological struggle, but out of a concern for justice.