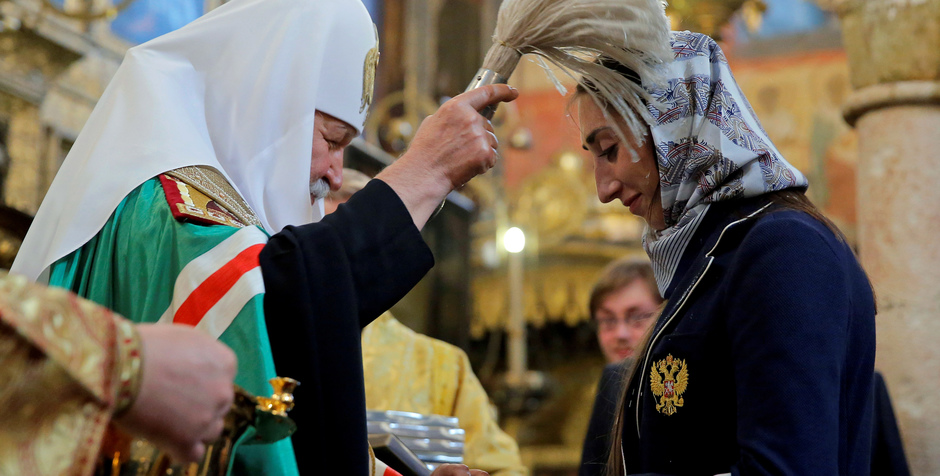 Russia may recognize “God” in its Constitution

“God” in the Russian Constitution

In the time since the collapse of the Soviet Union, the question of religion has quickly moved from the margins of religious organizations to the center of cultural and political debate. According to the Constitution, Russia is a secular state (article 14) and no religion is to have privilege over another. No religion may be established in the capacity of a state or mandatory. It further states that religious associations are separate from the state and equal before the law, however the Federal Law on Freedom of conscience and on religious associations (1997) in preamble emphasizes the unique role of the Orthodox Church in the history of Russia, and in the formation and development of the country’s spirituality and culture and respects Christianity, Islam, Judaism, and Buddhism.

A new opinion[1] has recently gained notoriety that mentioning God in the Constitution will bless and unite society in the wake of new challenges and problems which Russian society is facing. Several sociological studies have been conducted in recent times that show that the role of religion among Russian society is increasing.[2] According to some experts[3] mentioning God in the Constitution would depict a stark contrast between Russia and the “Fallen, Sinful West.”

Some worry whether the proposed amendments to include a mention of God may become a reason for discrimination against religious minorities (including Protestants and Catholics) that would become stronger and more widespread due to the perception of these groups by the majority of citizens as "non-traditional" and having an "incorrect” belief in God or somehow connected to the “West”. However, head Bishop of the Russian Pentecostal Union, Sergey Ryakhovsky says that Russian Protestants support the Patriarch’s initiative to mention God in the Constitution. Ryakhovsky also says that this will lead to a better understanding of the importance of religion generally and improve cooperation with the local body representatives.[4] The initiative is also actively supported by various representatives of Islam and Judaism[5]. Particularly, the Head of the Spiritual Assembly of Muslims of Russia, Mufti Albir Krganov, proposed adjusting the preamble to the Constitution of the Russian Federation so that the contributions of traditional religions are attached to the “historical, patriotic and moral foundation of Russia”[6].

This proposed amendment seems to be essential in a time of anti-religion tendencies all around the world. Moreover, such practice is common for many European countries, such as Germany, Ireland, Greece, Switzerland, Poland, etc. Russia’s national hymn also mentions God:” …protected by God, the native land…” And this didn’t create any legal or ethical problems. So, this question must first be clarified, and then it may be approved through democratic procedures.

M. Zupančič's Reaction to VA's DossierBy Boštjan Zupančič1586445896449
My reaction to the ECLJ Report described in Valeurs Actuelles is of several kinds. On the one hand, I'm not surprised because Mr Soros' fingers are practically everywhere. On the other hand, I am...
Read More

Deportation of jihadistsBy Nicolas Bauer1585238137381
A translation will soon be available.
Read More

The Bulgarian judge in the spotlight?By ECLJ1584975670512
Following the publication of our report on NGOs and the judges of the European Court of Human Rights, many newspapers around the world have picked up some of our information. Several MPs of different...
Read More

Rational Governance v. DemocracyBy Grégor Puppinck1584715957121
Since the end of the Second World War, Western states have been striving to build a new institutional order aimed at rationalizing and integrating national political regimes... (In French only for...
Read More
More Related Articles