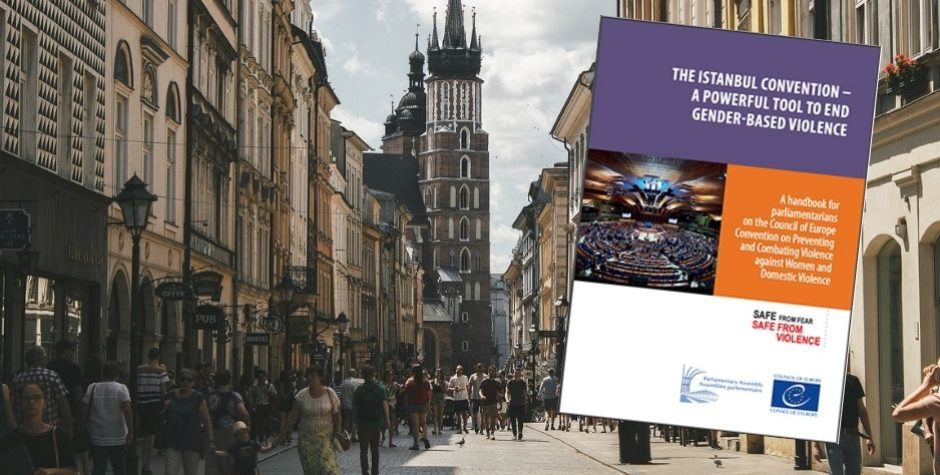 The announcement in July that Poland may soon denounce the Council of Europe Convention on preventing and combating violence against women and domestic violence, also known as the Istanbul Convention, provoked strong reactions. Moreover, this subject is among the many grievances expressed by the European Parliament against Poland in its resolution of September 17, 2020, adopted in the framework of the sanction procedure under Article 7 of the Treaty on European Union. On July 27, 2020, in line with what he had been suggesting since Andrzej Duda's victory in the Polish presidential election, Minister of Justice Zbigniew Ziobro officially asked the Minister of Family, Labour and Social Policy, Marlena Maląg, to initiate the process leading to Poland's withdrawal from the Istanbul Convention. On July 29, in the face of the controversy triggered by this announcement, Prime Minister Mateusz Morawiecki referred the matter to the Polish Constitutional Court on the conformity of the European Convention with the national constitution.

Criticisms of the Istanbul Convention

The Istanbul Convention, signed in 2011 by the member states of the Council of Europe (with the exception of Russia), was ratified by the Polish parliament in the spring of 2015, under the government of the Civic Platform (PO) in coalition with the agrarian party PSL. This ratification had provoked protests from the Law and Justice Party (PiS), now in power in coalition with two small right-wing parties, including the Polish Solidarity Party (Solidarna Polska, SP). Zbigniew Ziobro, who leads this party, which is necessary for an absolute majority of the government in the Diet, demanded last July, after the presidential election, that the PiS keep its campaign promise for 2015 and denounce this convention, which is considered hostile to the family and religion, in that it presents them as sources of domestic violence. According to Ziobro, the positive aspects of the Istanbul Convention, which truly concern the fight against domestic violence and violence against women, are already included in Polish law, while the ideological aspects of this convention would be dangerous and counterproductive. Indeed, according to this convention, states should take " the necessary measures to promote changes in the social and cultural patterns of behaviour of women and men with a view to eradicating prejudices, customs, traditions and all other practices which are based on the idea of the inferiority of women or on stereotyped roles for women and men. " (Article 12, para. 1). It should be stressed that the Convention does not refer to sex to qualify men and women, but to the concept of gender, which it defines as "the socially constructed roles, behaviours, activities and attributes that a given society considers appropriate for women and men" (art. 3). It is the first and only text of international law to date to contain such a definition for a word that until then meant biological sex (Cf. Rome Statute).

Grégor Puppinck, director of the ECLJ, had participated in the drafting of this Convention, and had tried, in vain, to have the complementarity between men and women recognized.

Moreover, for Zbigniew Ziobro, the commitment formulated in Article 14, par. 1, of the Convention to undertake "the necessary steps to include teaching material on issues such as equality between women and men, non-stereotyped gender roles" is contrary to the Polish constitution, which guarantees the right of parents to educate their children in accordance with their convictions. Furthermore, the Istanbul Convention, by committing signatory states to address the alleged cultural and religious causes of violence against women under the supervision of a supranational body, the GREVIO, is criticized for diverting the authorities and the social services and NGOs involved from the most frequent causes of domestic violence and violence against women in Poland. These causes are mainly alcohol, drug addiction and social pathologies.

Poland is not the only country to have doubts about the Istanbul Convention. In May 2020, Hungary's unicameral parliament passed a resolution by a large majority urging the government of Viktor Orbán not to ratify the convention, which Hungary signed in 2014, and also to take action to prevent its adoption by the European Union. As in Poland, Hungarian critics of the Convention argued that its positive aspects (its clauses effectively promoting the fight against domestic violence and violence against women) had already been incorporated into Hungarian law, while its ideological content was unacceptable. Earlier, in February, the Slovak parliament had also rejected the Convention, also by a very large majority, citing similar reasons and questioning its compatibility with the national constitution. In July 2018, the Bulgarian Constitutional Court rejected the Istanbul Convention as unconstitutional. The Bulgarian Constitutional Court had been seized on the matter by a group of 75 parliamentarians after the Bulgarian government signed the Istanbul Convention in January 2018. The Bulgarian judges, among other arguments, stressed the difficulty of effectively combating violence against women if the very definition of "woman" is put into perspective. In the Czech Republic, if the Istanbul Convention has still not been ratified, the government of Andrej Babiš was supposed to take up the issue on July 27th with a view to submitting it quickly to parliament for approval, but it finally gave up, fearing a new controversy.

To date, thirteen Council of Europe states have not ratified the convention signed in 2011: Armenia, Azerbaijan, Bulgaria, the Czech Republic, Hungary, Latvia, Liechtenstein, Lithuania, Moldova, Russia (which has not signed it), Slovakia, Ukraine and the United Kingdom. As can be seen, opposition to the Istanbul Convention comes mainly from the countries of Central and Eastern Europe.

In a meeting in Bratislava in September 2018, the Catholic bishops of eight Central European countries called on their governments to reject the Convention.

EU ratification of the Istanbul Convention: an objective of the European Commission and the European Parliament

The interpretation of the Istanbul Convention by the European Parliament has also been raised in Poland to underline the danger of this international agreement. Indeed, while the Istanbul Convention itself does not mention any right to abortion, MEPs considered in their resolution of 12 September 2017 that "the denial of sexual and reproductive health and rights services, including safe and legal abortion, is a form of violence against women and girls". It should be recalled in this regard that abortion is only allowed in Poland in well-defined cases,[1] and that Poland could not, without violating its law and constitution, accept the invitation in this resolution to EU member states "to guarantee comprehensive sexuality education, ready access for women to family planning, and the full range of reproductive and sexual health services, including modern contraceptive methods and safe and legal abortion". In the European Union, however, the regulation of abortion is an exclusive competence of the member states, which MEPs have pretended to ignore. But this resolution also shows how the Istanbul Convention, if adopted by the European Union as such, could be used to overlap with certain reserved competences of the member states by integrating it into the European law. On November 28, 2019, the new European Parliament again called on all EU member countries to ratify the Istanbul Convention without delay, at a time when seven EU countries (including the United Kingdom, which was still part of the EU at the time) had not yet ratified it.

Women are less often victims of violence in countries where the Istanbul Convention is contested.

Paradoxically, this situation is part of a more global context: according to the 2014 study of the Fundamental Rights Agency, women are less often victims of violence in the more conservative (and generally speaking more religious) societies of Central Europe than in Western and Northern European countries. The statistics on rape and other sexual assaults published by Eurostat are even more striking and show that women are far more often sexually assaulted in Western Europe and Scandinavia than in the countries of former Eastern Europe. Looking at the statistics published by Eurostat for 2018, one wonders what use the Istanbul Convention, in force since 2014, can serve. Indeed, the very Catholic Poland is one of the safest countries in Europe for women, while France is one of the countries where women are most at risk of being victims of rape or other forms of sexual assault. This does not prevent Frenchman Clément Beaune, Secretary of State to the Minister of Europe and Foreign Affairs, from wanting to financially sanction Poland if it denounces the Istanbul Convention.[2]

[1] Poland's 1993 law "on family planning, protection of the human foetus and conditions for terminating pregnancy" allows abortions in three situations: in case of risk to life or physical health related to the pregnancy of the pregnant woman (without time limit), in case of pregnancy resulting from rape or incest (up to the 12th week) and in case of prenatal diagnosis of serious and incurable disease or disability of the foetus (as long as the child could not survive outside the mother's womb, i.e. up to around the 24th week). In 1997, the Polish Constitutional Court formally prohibited the addition of a clause allowing abortions solely on the basis of the pregnant woman's socio-economic situation, ruling that such a freedom was disproportionate to the guarantee of the right to life enshrined in the Polish constitution.

[2] Topic discussed from the 18th minute of the Grand interview of July 29th ("L'invité de 8h20") on France Inter radio. The French Secretary of State believes that the link established in the Conclusions of the European Council of 17-21 July 2020 (in points 22 and 23) between the European budget and the recovery fund, on the one hand, and respect for the rule of law and European values, on the other, should apply to the rejection by a Member State of the Istanbul Convention.

About Restricting Family EducationBy Grégor Puppinck1608029031853
The Government’s choice to subject home-schooling to a licensing scheme is anti-liberal. Indeed, France faces a serious Islamist threat, but this is no reason to reduce the fundamental freedoms of...
Read More