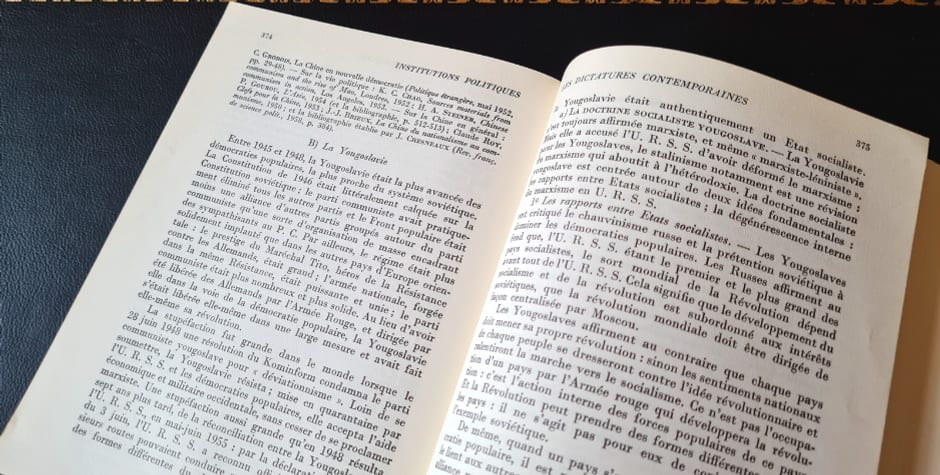 No Abortion Right in Constitutions...

On the occasion of a debate in the French Senate on October 19th on the inclusion of a “right to abortion” in the French Constitution, the researcher Nicolas Bauer looks back at an idea that has been promoted worldwide since the 1970s: that of enshrining abortion at a constitutional or even supranational level. Article first published in Le Figaro.

“It is a human right to decide freely on the procreation of children”: this article, formulated in 1974 in Tito's socialist ex-Yugoslavia, is the only example in the world of a right to abortion having been inserted into a constitution. This “right to abortion” could be exercised up to the tenth week of pregnancy. After the break-up of Yugoslavia, the individual countries abolished or modified this constitutional right. In Serbia, Slovenia and Northern Macedonia there is now freedom to “procreate”, but no freedom to abort.

A year earlier, in 1973, abortion was established in the United States through constitutional jurisprudence. In the famous Roe vs. Wade decision, the Supreme Court held that the freedom to have an abortion could be inferred from the US Constitution. This constitutional freedom was valid up to the point of fetal viability (20 to 24 weeks of pregnancy). It was abolished in June 2022 by the recent Dobbs vs. Jackson decision of the Supreme Court. Abortion was thus deconstitutionalized and returned to the realm of law.

The symbolic importance of Roe vs. Wade in the United States

Since the 1970s, Anglo-Saxon scholars and activists have been advocating for the constitutionalization of abortion around the world. After the fall of the communist regimes at the turn of the 1990s, they no longer cited the Yugoslav experience. The 1974 socialist constitution, best known for proclaiming Tito president for life, became an embarrassing reference. It was Roe vs. Wade that thus became the model for those who believe in the constitutionalization of abortion. Between 1973 and 2022, Roe was unchallenged: it was the most extensive constitutional protection of abortion that existed in the world. The Dobbs decision of 2022 thus destroyed an important symbol.

These foreign experiences have shown that a constitutionalization of abortion is revocable. Like any legal norm, constitutions and constitutional jurisprudence can become obsolete. This was of course the case in Yugoslavia with the end of socialism, but is also true in the case of Roe vs. Wade, where scientific advances played a critical role. Indeed, the “point of viability” was considered to be “at about seven months (28 weeks)” by Roe, whereas the World Health Organization (WHO) is now able to set it at around 20 weeks of pregnancy.

The 1994 Cairo International Conference was critical in this battle. The International Planned Parenthood Federation (IPPF) had prepared in advance for this United Nations (UN) event, intending that abortion should be included in a final document signed by the various States. Sixty governments were represented by members of Planned Parenthood and its President headed the committee in charge of drafting this final document. Planned Parenthood had also financed experts to travel to the event from all over the world. This entryism was thwarted by the Holy See (Vatican) and other States, so that the UN States finally signed a program of action committing them to “help women avoid abortion” and to “reduce the recourse to abortion.”

After this failure in Cairo, Planned Parenthood and its allies developed another strategy to promote an international right to abortion. This involves initiating or raising appeals to those institutions that are able to interpret international treaties. The objective is to encourage these institutions to gradually change their interpretation of the treaties, eventually considering that abortion is protected by them. This approach is called “strategic litigation.” It has failed several times at the UN, at the Inter-American Court (in 2021), and at the European Court of Human Rights (ECHR). According to the latter, the European Convention does not confer a “right to abortion.”

The political and cultural effects of legal initiatives

ECHR interprets the European Convention as a “living instrument which must be interpreted in the light of present-day conditions”, a phrase that gives hope to pro-choice Feminists. NGOs would like the European judges to consider one day that abortion is a woman’s right, because of “present-day conditions.” With this objective, two NGOs are currently multiplying the appeals against Poland, which banned abortion of disabled fetuses in 2020. These NGOs are searching on the Internet for women who are pregnant with children suffering from Down’s syndrome and convincing them to lodge an application to the ECHR requesting an abortion. Some have already been rejected, others will soon be heard.

These new attempts to create a “right to abortion” at the supra-legislative level are unlikely to succeed now. But their main impact is in fact not legal, but political. These efforts spread the idea that a “right to abortion” exists and that access to abortion is a fundamental right of every woman. Legally, this is false in almost every country in the world, as well as in international law. Morally, however, it has become almost a given in Western societies. It is probably this cultural change that has the most influence on a French legislator today.