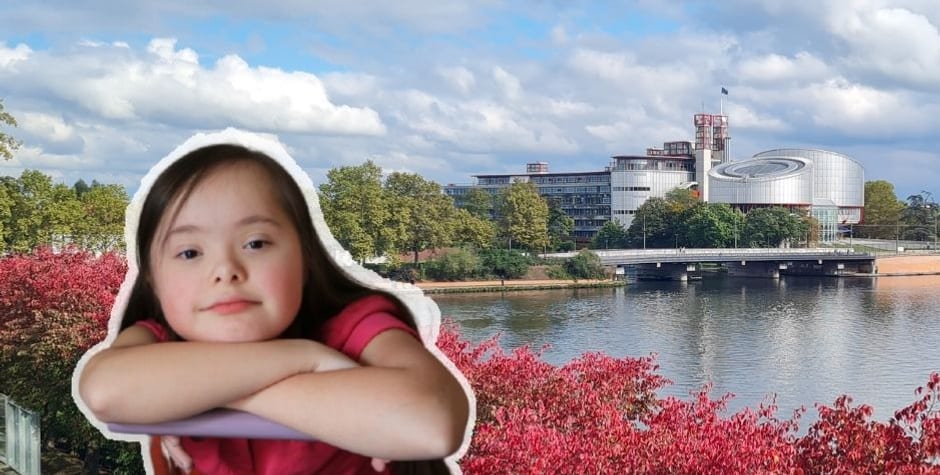 Killing a baby is bad. Killing a baby solely because of his race, sex or disability is even worse. This truth is difficult to avoid, and it is one of the main issues debated in the “abortion worldwide fight” that is going on at the United Nations.

Persons with disabilities are opposing abortion based on fetal impairment. They denounce its legalization as a kind of official discrimination against them. And they are heard.

Recently, on September 14, 2021, the Committee on the Rights of Persons with Disabilities (CRPD) of the United Nations expressed its concern about “The devaluing of persons with disabilities through ableist policies and practices that underpin prenatal genetic screening on fetal impairment, particularly concerning trisomy 21, autism, and neonatal detection of deafness.”

This statement is part of the U.N. Committee concluding observations on France’s compliance with the United Nations Convention on the Rights of Persons with Disabilities. The ECLJ took part in this process, as we submitted to the Committee a Memorandum addressing this issue.

This U.N. Committee is a “quasi-jurisdiction” in charge of monitoring the implementation of the Convention on the Rights of Persons with Disabilities by its States Parties: its interpretation of the treaty is authoritative, albeit not compulsory.

Its recent recommendation obviously points to the massive use of prenatal screening that leads to the elimination of most fetuses diagnosed with handicap such as Down Syndrome.

This recommendation is not isolated: it results from the position adopted by the CRPD against eugenic abortion. This Committee considers that “Laws which explicitly allow for abortion on grounds of impairment violate the Convention on the Rights of Persons with Disabilities (Art. 4,5,8),” particularly because this type of abortion “perpetuates notions of stereotyping disability as incompatible with a good life” (2018). For the Committee - which is composed of a majority of people with disabilities - eugenic abortion is itself discrimination that stigmatizes people with disabilities.

Since 2011, this Committee has already ruled regarding Spain, Austria and Hungary that fetal impairment should not be the subject of a specific abortion regime, particularly with regard to the legal time limit which, in some countries, can be very late in case of disability. The Committee also recommended that the United Kingdom “amend its abortion law accordingly,” finding that “Women’s rights to reproductive and sexual autonomy should be respected without legalizing selective abortion on the ground of fetal deficiency” (2017).

This position is consistent with the intent of the drafters of the Convention on the Rights of Persons with Disabilities, but also of the Universal Declaration of Human Rights. Indeed, during the drafting of the Universal Declaration, the Danish diplomat Mrs Begtrup recommended providing for exceptions to the respect for the right to life in order to allow “the prevention of the birth of mentally handicapped children” and of children “born of parents suffering from mental illness.”[1] This proposal was rejected after the representative of Chile, Mr Charles Malik, noticed the similarity between these proposals and the Nazi legislation.

More recently, the U.N. Special Rapporteur on the Rights of Persons with Disabilities, Mrs Catalina Devandas Aguilar, denounced in her 2020 report to the Human Rights Council the ideology that there are “Lives not worth living,” echoing the title of Binding and Hoche’s famous 1920 book that founded Nazi eugenic policy. Mrs Devandas Aguilar herself has spina bifida, which is one of the major motives for eugenic abortion. For the UN expert “When discussing issues such as prenatal testing, selective abortion and pre-implantation genetic diagnosis, there is a shared concern among disability rights activists that bioethical analyses are often used to give an ethical justification to a new form of eugenics, often referred to as “liberal” eugenics.”

In fact, Mrs Devandas Aguilar and the Committee are trying to defend the right of disabled people to exist on an equal footing with able-bodied people. They see that eugenic abortion stigmatizes them and denies them their dignity. But this position is out of step with pro-abortion lobbies. In order to defend their cause, without offending radical feminists, disabled people only ask that disability no longer be a specific -stigmatizing- reason for abortion. Therefore, they oppose eugenic abortion not explicitly in respect of the right to life of the unborn disabled babies, but in consideration of the rights and dignity of the “surviving” disabled people.

It is precisely on this question that the European Court of Human Rights will have to decide soon, following the recent suppression of eugenic abortion by Poland. Several women have complained to the Strasbourg Court that they would be prevented from having an abortion if, once pregnant, their children were found to be disabled. The ECLJ intervened in this case in support of the prohibition of eugenic abortion, along with several U.N. experts and former judges from both the European and the Interamerican courts of human rights.

The same issue should be discussed in the US, where the current Supreme Court’s constitutional doctrine under Roe v. Wade and Planned Parenthood v. Casey allows abortion for any reason, including discriminatory ones.

The subject is therefore not closed. However, one thing remains certain: the so-called “right to abortion” generates not only opposition, but also a series of contradictions within human rights themselves. Another well-known example of such contradiction is the issue of sex-selective abortion that is also considered by the U.N. Committee on the Elimination of Discrimination against Women (CEDAW) as an unlawful discrimination based on sex,[2] while the same U.N. committee promotes abortion worldwide. Therefore, the same abortion can be a “right” or an unlawful discrimination, depending solely on the subjective intention of the parents.

In fact, the right to abortion is rooted in the respect of the woman’s privacy, that is to say of her will, and in the ignorance of the humanity of the fetus. However, eugenic, sexist or racist abortion shows us not only that a woman’s will can be carried out with bad intentions - which do not deserve respect, but also that the fetus has human characteristics: a sex, a race, a state of health, which he shares with the people born. Thus, the consideration of eugenic, sexist or racist abortion has the effect of destroying the logic of the so-called right to abortion.

Abortion proponents are trapped in these contradictions that result from the lie of the so-called “right to abortion”. In law, as in any rational discipline, contradiction is an evidence of error.