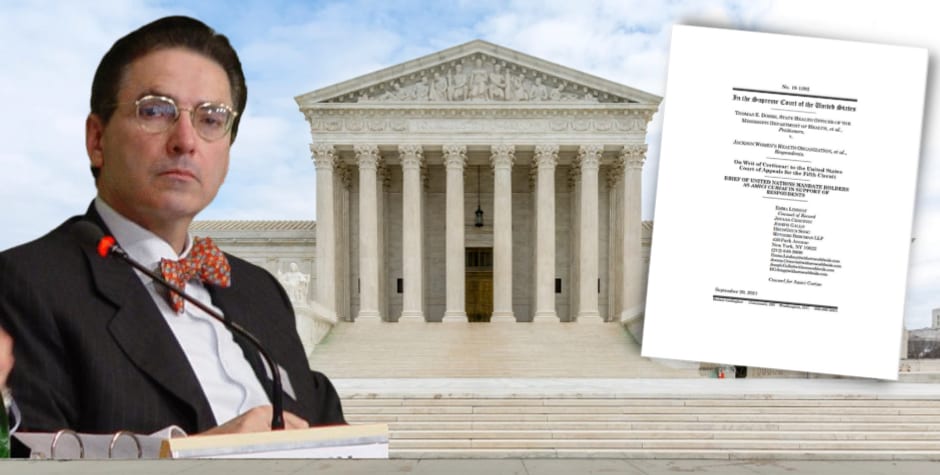 On December 1st, the Supreme Court of the United States heard the oral arguments in the Dobbs v. Jackson Women’s Health Organization case.  At stake: the right for States to limit abortion on demand before viability.  The ECLJ submitted an amicus brief to present the American U.S. Supreme Court with the European Court of Human Rights’ case-law which supports this right stands in contrast to abortion as a “right.”

On the other hand, some “pro-abortion activists” disguised as “independent U.N. experts”, as we told you about here, submitted another amicus brief, pretending that States have a duty to legalize broadly abortion, based on international human rights law.  The ECLJ asked Dr. Alfred de Zayas his opinion on this very question.  Dr de Zayas is the former U.N. Independent Expert on the Promotion of a Democratic and Equitable International Order, former Secretary of the UN Human Rights Committee and Chief of the Petitions Section in the Office of the UN High Commissioner for Human Rights.

Q.: Dr. de Zayas, some U.N. experts officially pretend before the U.S. Supreme Court that there would be a human right to abortion.  Do you agree that international human rights law obliges States to provide for abortion – for any reason - until the viability threshold of the baby, i.e., 24 weeks?

A: There is no treaty or binding human rights law imposing an obligation on States to provide for abortion.  On the contrary, Article 6 of the International Covenant on Civil and Political Rights (ICCPR) obliges States to protect the sanctity of life.  The problem lies with false interpretations of the Covenant by “experts” who are already committed to abortion, who refuse to recognize that the right to life begins with conception.  The American Convention on Human Rights recognizes that human life begins with conception.  In other words – while human rights law does not always prohibit abortion, it certainly does not allow it.  Abortion is not a human right; it is an issue to be decided on a case-by-case basis.  What is absolute and untouchable is the right to freedom of religion and belief, and NO ONE can be obliged to perform an abortion or to participate in an abortion (as a nurse) if that person conscientiously objects.  Article 18 of the U.N. Covenant on Civil and Political Rights is clear on this.

Q.: What do you think of this initiative of some pro-abortion mandate holders, led by Mmes.  Mofokeng and Upreti, to intervene before the U.S. Supreme Court?  Can they claim to represent the United Nations, as if they were officially presenting the U.N. interpretation of human rights?  Is it the role of mandate-holders to intervene before national jurisdictions?

A: This initiative is a disgrace and takes away from the credibility and seriousness of the Human Rights Council’s special procedures.  It is incompatible with the International Covenant on Civil and Political Rights, because it contravenes three important articles of the ICCPR – article 18 on the right to religion and belief, article 23 on the maximum protection to be given to family and family life, and article 24 on the protection of the rights of the child.  It also violates article 10 of the Covenant on Economic Social and Cultural Rights.  The initiative contravenes the code of conduct of Rapporteurs [Rules set forth to protect the independence and credibility of Special Procedures Mandate-holders of the Human Rights Council. See official document here, editor’s note] and gives a bad name to the entire system of Special Procedures.  Other Rapporteurs should oppose it, but there is a kind of “groupthink” among the Rapporteurs, and it is very rare that a Rapporteur will call other Rapporteurs to order. There is a kind of “solidarity” among Rapporteurs that actually undermines their independence and credibility. States should denounce Rapporteurs who go beyond their mandates and engage in politicking.

A: Both.  There is enormous pressure on the part of non-governmental organizations like Amnesty International, Human Rights Watch, and the International Service for Human Rights.  Behind them there is the very strong and well-funded abortion lobby – and the Open Society Foundation.

Q.: What should and could be done to better protect the right to life?

A: Inform the public and engage Senators and Congressmen/women.  If the broad public is properly informed, it can formulate its own opinions.  But the public is being manipulated and there is a concerted effort to “manufacture consent” in favor of abortion.  The right to access to all information is crucial, but it has been sabotaged by the corporate media.  Censorship practiced by the State is contrary to article 19 of the ICCPR.  Actually, it is worse when practiced by the private sector, which has zero democratic legitimacy.  I have been myself unable to place op-eds and other articles laying down the legal and ethical arguments against abortion.  Other rapporteurs have endured the same kind of “black-out” by the media.