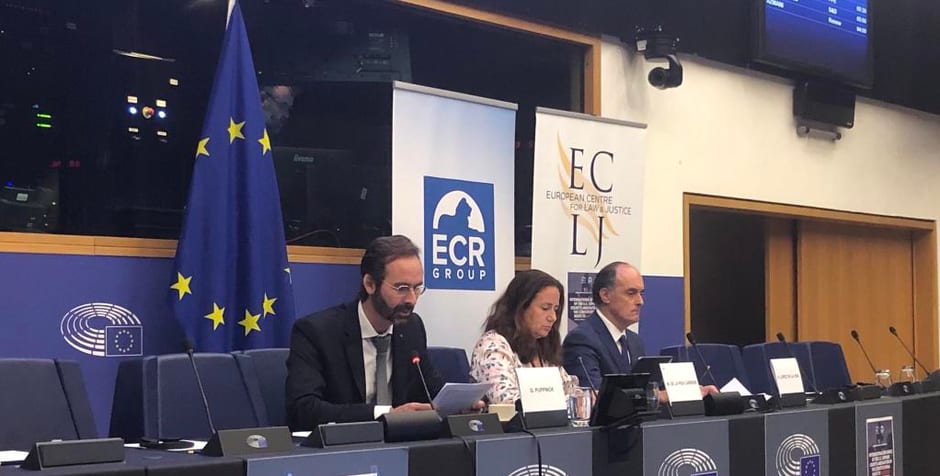 Speech delivered at the European Parliament by Dr Grégor Puppinck, on July 5, 2022.

The right to abortion is based on lies.

First, there is the lie that abortion would be a "liberal" practice, that it was intended to liberate women, when the aim of its historical advocates was, above all, to increase their control over both human reproduction and human life.

Then, there are the lies that abortion would be safe, that it would be "health care", that its legalisation would reduce maternal mortality, or that women would be victims of "forced pregnancies", as if pregnancy were a fatality.

There is also the lie that it would be impossible to prevent or reduce the recourse to abortion, or that abortion would be a prerequisite for equality between men and women. So many lies.

However, the biggest lie about abortion is that it denies the existence of the aborted child. That is the lie on which the so-called right to abortion is based.

Abortion can be presented as a woman's right over her own body only because it ignores her child; this is what the U.S. Supreme Court did in Roe v. Wade in 1973, and it was wrong. This is a gross lie because abortion is obviously performed on a child! The child is the one who directly suffers the abortion, not the mother. It is the child who is aborted, not the mother.

This lie goes even further since abortion advocates are always careful to avoid talking openly about abortion itself; they use euphemism such as "procedure", "menstrual regulation", "reproductive rights" or "women's rights" to avoid saying "abortion". In doing so, they avoid owning up to the bloody reality of what they are promoting.

This lie spreads from international abortion lobbies and the United Nations to the laws of Western countries. It is a prerequisite for the right to abortion.

This lie was the basis of Roe v. Wade, and it was finally rejected by the Supreme Court.

Admittedly, the latter followed the example of the European Court of Human Rights, which had already stated that pregnancy and abortion are not only a matter of the mother's private life,[1] but also of the "unborn child" she is carrying,[2] as well as of the child's "potential father" and society.

It is because the child exists, even if he is only described as a potential human being, that pregnancy and abortion go beyond the private life of the mother.

Moreover, in several important cases, the European Court has applied the European Convention to a child before birth, in relation to the right to life, respect for privacy, and the prohibition of torture. The Court of Strasbourg has ruled that the protection afforded by the State to the fetus was justified in view of the "rights and freedoms of others".[3] As Judge Pinto de Albuquerque rightly pointed out, this means that "the embryo is an “other”, a subject with a legal status".[4]

This is the key reason why abortion can never be a subjective "right": because no one can have an arbitrary right over the existence of "others". This is also what the Supreme Court says: "abortion is different because it destroys what Roe calls a 'potential life' and what [Mississippi] law calls an 'unborn human being'" (S.4).[5]

Thus, there is no right to abortion under the European Convention, nor under the U.S. Constitution. There is no doubt. Moreover, the numerous commitments made by States to reduce and prevent the recourse to abortion prove that abortion is not a right, because if it really were a fundamental right, it would be absurd and unfair to prevent its use.

Disguising abortion as a right does not change the nature of the act.

It must be understood that human rights are not created by judges and parliaments: they pre-exist. People proclaim, declare, and recognise them, but they do not create them. What is a human right? It is the guarantee offered by the State to each person to respect his or her ability to fulfil the potentialities of human nature: to think, to learn, to express oneself, to pray, to associate, to found a family. Human rights do not guarantee just anything, but they protect the exercise of the human faculties by which we fulfil ourselves as human beings. Human rights are derived from and protect the human nature.

However, can a woman be said to be fulfilling and humanising herself by aborting the child she is carrying? Certainly not! The suffering caused by abortion is there to prove it. If abortion were a right, it would respect human nature and not cause suffering. Between a fundamental right and abortion, the difference in nature is obvious. Abortion can never be a "fundamental right" because its primary, direct object is evil: it is the destruction of an innocent human life, whatever the intention or reasons for that destruction. There is no point in yelling that abortion is a right to make it a right, or even enshrining it in the Constitution or the EU Charter of Fundamental Rights. These things do not change the reality of the act.

So no, there is no right to abortion under the European Convention and the U.S. Constitution, nor under any other declaration of Human Rights. But there is a right to life, that sometimes is said to start from conception, like in the American Convention on Human Rights, adopted in 1969, which states that “Every person has the right to have his life respected. This right shall be protected by law and, in general, from the moment of conception”.

In this regard, the European Court recognises that it is “legitimate for a State to choose to consider the unborn to be such a person and to aim to protect that life”.[6] Like the U.S. Supreme Court, the European Court leaves states free to determine the starting point of the right to life, and therefore to allow abortion or not.

This is a concession made by the judge to legally tolerate abortion, and it is based on another lie: namely the false distinction between the reality of the "unborn child" and the legal notion of "person". In order to allow abortion, the European Court declared itself unable to know "whether the unborn child is a person” even though it does recognise that the unborn child belongs to “the human species”[7]. It is this lie that allows judges to turn a blind eye to abortion, and to let each state decide on the matter.

Now, the situation is pretty much the same in the United States, where each state can regulate or prohibit abortion.

This is an improvement compared to the previous situation, but it is not enough because the Supreme Court does not yet grant legal protection to the human being before birth. Such protection is needed, for example, to prohibit "late-term" abortions, which the Supreme Court calls a barbaric practice, as well as abortions based on the child's sex, race, or disability, among others.

There is still a long way to go before Western society becomes aware of the value of every human life again, even that of the weakest. But I remain confident because more and more physicians and midwives are refusing to perform abortions. It is becoming increasingly clear that sucking up and grinding a fetus, crushing its skull, and dismembering him to extract him, or injecting poison into his heart is a crime. This is the bloody reality of abortion.

It is because abortion is a crime that its advocates have been in a moral panic since the Supreme Court’s ruling on Dobbs; because this crime came to light; because it is no longer hidden behind the so-called constitutional right to abortion which offered them a fake moral guarantee.

They are stricken by panic, even in Europe, in this Parliament, even though they have a large majority. Their panic reveals their own weakness, their moral insecurity. They have no argument other than invective and the apologia of abortion.

They can pass repeated resolutions, as they do, and they can affirm and enshrine abortion as a supreme European right, they can exclude us from this Parliament, as they are willing to do, they can censor the defenders of human life, as they have started to do: all this will not change anything. Abortion will remain a crime, a taboo dogma that rests on the sand of lies and that will eventually collapse. For in every new generation that God creates, the pure consciences of young people revolt against this crime that cries out to Heaven for justice.

[5] “Abortion is different because it destroys what Roe termed “potential life” and what the [Mississippi] law . . . calls an “unborn human being” (S.4). “