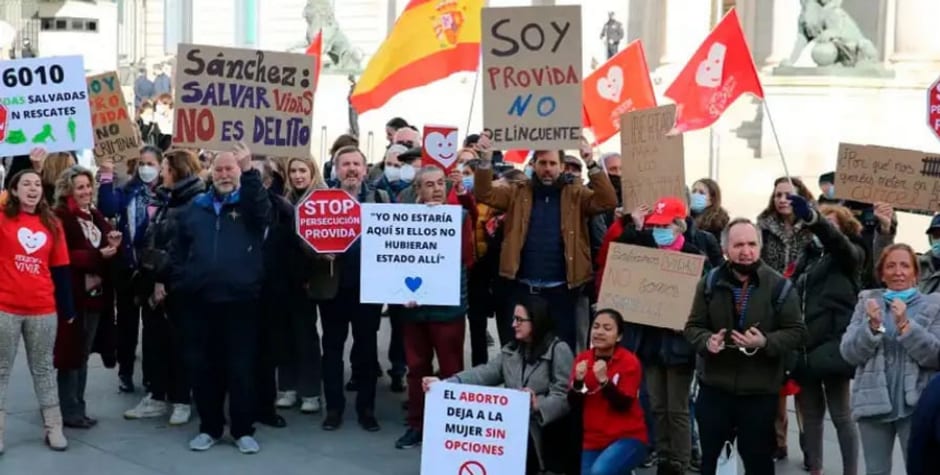 On April 6, 2022, the Spanish Senate reformed the Penal Code to penalize pro-life activists who actively or passively demonstrate outside abortion clinics. From now on, the Courts will be able to condemn these activists if the latter wish to dialogue and offer help to women considering abortion. To justify this reform, the Senate decided to equate the action of these activists with "harassment". In support of this argument, a 2018 study by the Association of Clinics Authorized to Perform Abortions stated that 89% of women seeking abortions in Spain reported having been harassed and 66% threatened. Actually, this reform initiated by the socialist Pedro Sanchez is not intended to protect Spanish women from so-called harassment, but rather aims to prevent any opposition, even peaceful, to the "right to abortion." In reaction to this law, pro-life activists, who consider themselves as "rescuers," demonstrated in front of the Senate to express their indignation (photo credit: Hazte Oir).

This amendment to the Penal Code demonstrates the impossibility of questioning the act of abortion in the public sphere. Abortion would be a right, accepted as a "good". Thus, Article 172 quater of the Penal Code now states that anyone who hinders "the exercise of the right to voluntary termination of pregnancy, harasses a woman by annoying, offensive, intimidating or coercive acts that infringe on her freedom"[1] will be sentenced to between three months and one year in prison or to between 31 and 80 days in community service. In Spain, trying to save a life through acts that are considered "annoying" or "offensive" is now a crime.

The vagueness of the law is very problematic. Indeed, anyone can claim to be "annoyed" by activists praying in silence for these women and their children, or wanting to establish a dialogue with them. In addition, there is little specificity in the law to define what constitutes annoying, offending or intimidating another person. At what point does an act become harassment or coercion?

Simply praying in silence or talking with a woman should not be considered coercive or harassing. The criminal lawyer Bárbara Royo, interviewed in the newspaper El Debate, argues in this sense, considering that "it is difficult to imagine how those who demonstrate with a banner in front of an abortion center can be convicted. Indeed, their presence is not against a particular woman, but against a practice that, because of their beliefs or religion, is not admissible".

With this law, the legislator's only concern is the impact that pro-life demonstrations may have on people who wish to have an abortion. This law is part of the subjectivist dynamism of obtaining rights. By subjectivist, we mean that the well-being of the individual alone is supreme, there is no longer any consideration of the common good or of a good in itself. The law is no longer oriented towards the Good, no longer seeks to harmonize according to a natural order but is there to concede. Pierre Manent explained this in his essay La loi naturelle et les droits de l'homme: "political law no longer has any other reason to exist than to guarantee human rights, which are ever more extensive. The law no longer commands, no longer directs, no longer guides: it authorizes."

Finally, this law is a threat to social order at a time when more and more minorities are claiming their right not to be offended. Nevertheless, democratic discussion can by definition offend. This does not mean, however, a rejection or a contempt of the person with whom this discussion takes place. By establishing this confusion, this law jeopardizes the most fundamental public liberties. It calls into question the freedom of expression and belief. Let us remember that freedom of belief is one of the rights enshrined in the Spanish Constitution. Thus, according to its Article 20, Spain recognizes and protects a right "to freely express and disseminate thoughts, ideas and opinions by word, writing or any other means of reproduction [...] The exercise of this right may not be restricted by any form of prior censorship."

The "right to abortion" now seems to take priority over a right that is nevertheless constitutional: the right to freedom of expression. The implementation of this law is therefore not in conformity with the Constitution; the mortifying ideology of abortion pursues its illusory goal: to become a fundamental right.