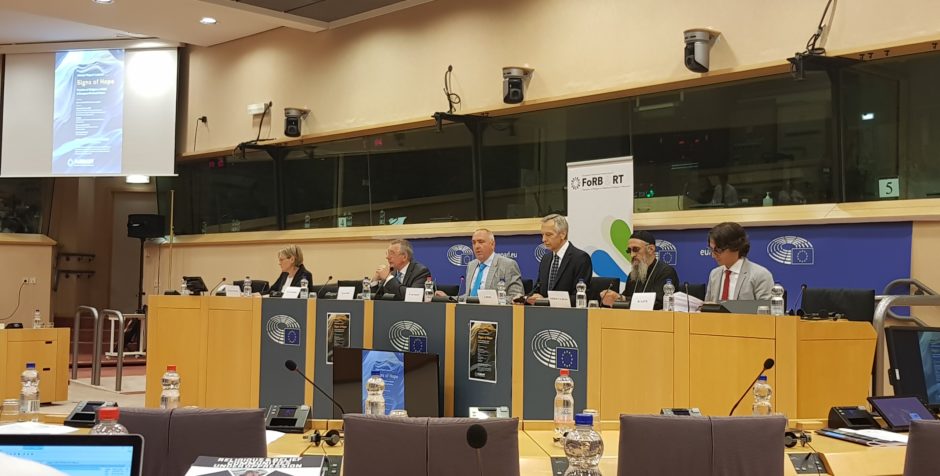 On Tuesday, 4 September 2018, the ECLJ traveled to Brussels for the publication of the annual report (2017) by the European Parliament's Intergroup for Freedom of Religion or Belief and for Religious Tolerance (FoRB & RT).

Ms Mairead McGuinness (MEP), First Vice-President of the European Parliament and responsible for the implementation of Article 17 of the Treaty on the Functioning of the European Union (dialogues with faith-based and non-religious organizations), especially advocated for the abolition of the blasphemy laws.

Asked to testify about persecution in Egypt, Father Paulus El Ryany spoke on behalf of a Coptic monastery that the Egyptian authorities wanted to destroy. He was imprisoned and tortured for two years for refusing to leave the monastery and now lives as a refugee in Italy.

As the report mentions, the situation of Christians and other religious minorities in Egypt is very difficult; the Coptic priest stated that young girls are frequently kidnapped and forced to convert to Islam.

Finally, Marc Giacomini was also present. He was appointed in December 2016 Deputy Executive Director of Human Rights and Global and Multilateral Affairs by Federica Mogherini, High Representative of the European Union for Foreign Affairs and Security Policy and Vice-President of the Commission.