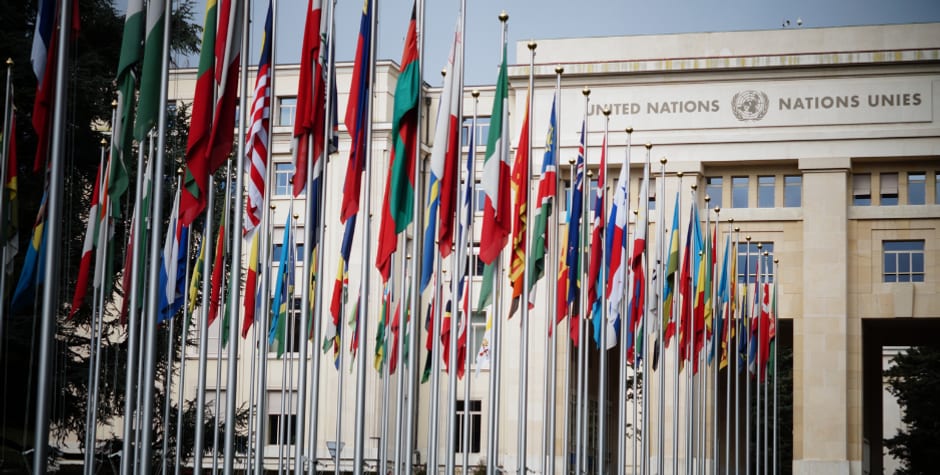 The United Nations may give rise to legitimate fears

As the 49th session of the Human Rights Council gets underway, the UN seems to be in a bad shape. Louis-Marie Bonneau, Fellow researcher at the European Centre for Law and Justice (ECLJ), analyzes the possibilities of reforming the international institution.

Opinion published in Marianne on February 10, 2022.

The decisions of the European Court of Human Rights (ECHR) on nationality deprivation, family reunification, and terrorism or unionism in the army are regularly targets of criticism from right-wing politicians. After the warnings pronounced against it, the ECHR has reevaluated itself. The United Nations (UN) is less often targeted by these criticisms related to the international human rights system, although Éric Zemmour recently criticized the institution in a televised debate last September: "I don't particularly like this UN machine that produces reports, proclamations...". However, current activities within the United Nations can legitimately arouse our fears.

The United Nations faces a troubling trend with its influential experts

Although the United Nations is a famous organization, it retains a certain mystery for the general public. Everyone knows its orientation towards maintaining world peace through the Security Council and the Blue Helmets. But few know of its commitment to human rights in Geneva through the Human Rights Council (HRC). This "human rights" branch of the UN is very influential with States Parties because it pushes them to justify, in front of others, whether they properly respect human rights. For example, States are asked to prove that the rights of disabled people are respected in their country or that their prisoners are not mistreated.

At the heart of this system and playing a key role within it are the experts of the Human Rights Council.  These UN experts serve as a volunteer external monitors who oversee a nations' compliance with their human rights obligations. Theoretically, they are volunteers  to assure States of their commitment to human rights and independence from any outside influences.

However, certain abuses cast doubt on the ethics of some of these experts. Their ideological proximity with and financial dependence on large private foundations and States is concerning. In five years, 37 UN experts have received a total of $11 million that they spent outside of the control of the UN. Financial aspects related to UN experts is a sensitive subject because it touches the heart of one of the most important and most attacked mechanisms of the international human rights system. On the basis of 28 interviews conducted with former and present UN experts[1], it appears that the concern about funding is real. It could hide inner corruption and a real capture of the international human rights system by certain private foundations, NGOs and States.

UN Experts Need to be Financially and Ideologically Independent

UN experts must be financially and ideologically independent for a key reason: they can be very influential. States listen to them and sometimes change their legislation to comply with their criticism. International courts cite the conclusions of experts' reports in their decisions. Some experts, 37 out of 121 in five years (30%), believed that their independence gave them the right to raise external funds outside of the control of the United Nations. In reality, these funds create dependency. Further, receiving such funds is accompanied by opacity despite the UN’s professed desire for more transparency since 2015. Indeed, in that year, realizing that receiving such funds could taint the appearance of their neutrality, experts voluntarily and non-mandatorily decided to declare the amounts they had received. Further, the UN Board of Auditors previously denounced such payments in a 2011 report, in which it stated that such funds could "potentially compromise the perceived independence of mandate holders" (§ 68).

Based on these statements, it appears that there are serious doubts regarding the external influences on the activities of UN experts. For example, the Ford Foundation spent $90,000 USD[2] to have a report written in 2015 on the theme of gender and torture (A/HRC/31/57). This report, published under the acronym of the UN, was cited in a decision of the ECHR, without the court knowing by whom it had been funded. The Ford Foundation wanted to position itself to influence publications related to this theme and finance those who would have the influence and legitimacy necessary to develop it according to their will. In total, at least 11 million dollars were spent by certain private foundations, NGOs and States to "support" experts without any monitorization by the UN.

It thus appears that a minority of experts use the notoriety of their UN mandate and external funding to promote their causes. For example, this is the case concerning a small group of feminist experts who use their position to fight for women's rights and impose their vision of society. In another example, there are experts who have worked more or less in close relations with the Center for Women's Global Leadership (CWGL). In 2017, this center received $100,000 from a major foundation with the explicit purpose of "influencing" the Special Rapporteur on Slavery to write a report. The chair of the organization's program board that made the donation was Fionnuala Ní Aoláin. She later became a Special Rapporteur at the UN. Another UN expert, Melissa Upreti, is close to the CWGL because she is the CWGL’s global advocacy. Now, she holds the perfect position to continue advancing the interest of the CWGL through her role at the UN.

In this context, it is reasonable to expect that a right-wing candidate, if elected, will harden his or her relationship with the UN, as former U.S. President Trump did. Today, there are no sanctions in the regulations applicable to UN experts, even though there is a precise ethical and financial framework for their activity. The Human Rights Council must therefore take its responsibilities seriously and revoke the mandate of experts who violate their ethical obligations. After the warnings issued against it, the ECHR published in September a new version of its "judicial ethics resolution" that it had adopted on June 21, 2021. The UN must undertake the same reform process. In its current state of affairs, candidates are right to be wary, but they would be wrong to reject international organizations altogether. The Human Rights Council has a responsibility to be self-critical and must do so in order to realign with its core mission: pacifying inter-state relations.

Threats to Tigray's Religious HeritageBy Louis-Marie Bonneau1644244260171
The situation in Tigray will be on the agenda of the 49th session of the UN Human Rights Council in February. In its resolution 47/13 , voted by Argentina, Austria, Bahamas, Brazil, Bulgaria, Czech...
Read More
More Related Articles