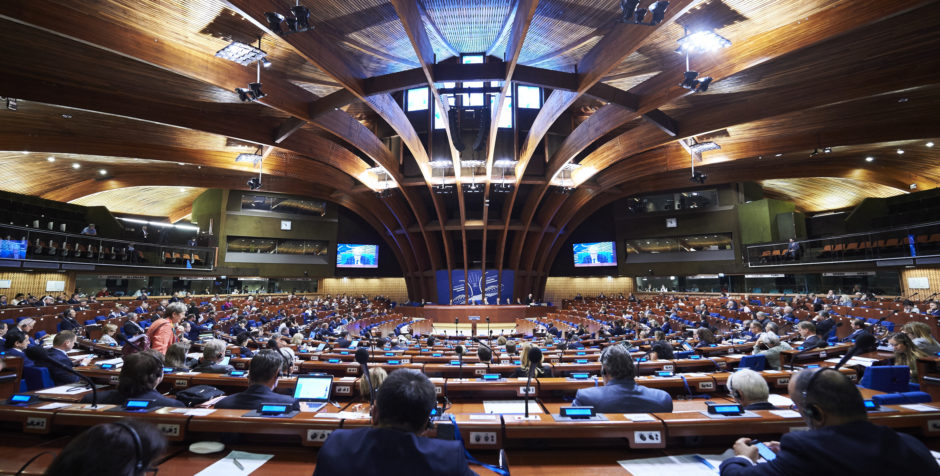 A Report “Private and family life: achieving equality regardless of sexual orientation” (Doc. 14620 (2018)) will be debated during the Autumn plenary session of the Parliamentary Assembly of the Council of Europe (PACE). This text denies the difference between families and the households he calls “rainbow families.” On 10 October 2018 the PACE will debate and vote on the draft resolution.

Update: The Report and the Resolution were adopted on 10 October 2018. See here the vote results.

The Swedish Rapporteur Jonas Gunnarsson fulfils his mission of PACE General Rapporteur for LGBT matters, a post created for him in 2015. The “LGBTIQ+ report” aims at forcing States to grant “unnatural rights” to ever more original kinds of relationships. Assisted medical procreation (AMP) for lesbians is currently debated in the Council of Europe, and with this draft resolution it strives to force its political influence on other States, in particular France where AMP for lesbians is illegal. In doing so, Jonas Gunnarsson deliberately takes the risk to increase both political division of Europe, and the credibility loss of international institutions. This attempt to impose Scandinavian values on States like France further shows the lack of consensus even within the Western society. If there is no unity in the West, how could we expect States in Eastern Europe to adapt to Jonas Gunnarsson’s vision on sexuality and family? The Rapporteur is propagating for universality of Scandinavian rights to “same-sex couples” within the Council of Europe, although they have no legal nor cultural basis in the rest of the Member States.

The report urges Member States to overthrow all family norms. It introduces three different categories of “families” - “same-sex families,” “other rainbow families,” and “other families” - and asks States to acknowledge these “families” and their so-called reality. Which reality, and of what? These categories remain undefined by the Swedish Rapporteur. The use of the phrase “rainbow families”, although it does not have any legal definition, undermines all clarity and credibility of the report, and in turn, its legitimacy. According to the “LGBTIQ+ report,” these “rainbow families” would be discriminated in their right to enjoy private and family life, protected under Article 8 in the European Convention on Human Rights. The Report discusses many issues, including adoption of a child. By noticing a supposed increasing acceptance amongst States regarding “adoption rights,” the Swedish Jonas Gunnarsson reduces Europe to Scandinavia and Western countries. In reality, only 16 out of 47 States have legalized the joint adoption for “same-sex couples”.

The Resolution calls on States to grant medically assisted procreation to “same-sex couples” in the same conditions as heterosexual couples. This demand exceeds the Court’s case-law which stated that it is important to protect all children “having regard to the prerogative of the State to establish descent through adoption and through the prohibition of certain techniques of medically assisted reproduction.”[1] Thus, States have the right to reserve artificial procreation to situations of pathological sterility or infertility. While marriage for “same-sex couples” exists in France, the Conseil d’État stated in an opinion that forbiding access to assisted reproductive technology to two married women is not contradictory with the principle of equality. Indeed, they are not in the same situation as a married man and woman[2]. The “LGBTIQ+ report” is deliberately ignoring the heated debates regarding assisted medical procreation that are not only taken place between Member States but also within States. As an illustration, France faces a persistent division in opinion within its population on medically assisted procreation since the huge demonstrations in 2013. Whereas both François Hollande and Emmanuel Macron have promised to open these artificial techniques to lesbian women, the government is still hesitating to take this political risk and Jonas Gunnarsson wants the Council of Europe to intervene in the debate.

Jonas Gunnarsson goes against the case-law of the European Court of Human Rights (ECtHR) in other respects. The report requires States to “refrain from adopting changes (...) that would prevent the recognition of same-sex marriage or of other forms of rainbow families” (§4.2), whereas the case-law does not impose a positive obligation on Member States to grant “same-sex couples’” access to marriage.[3] The report recommends that only “the legislatures or the highest courts” has the authority to define marriage, regardless of the citizens’ will. Jonas Gunnarsson targets Romania here and disrespects the 3 million Romanian nationals that have taken the initiative to the Romanian referendum, and other States’ decisions that have previously made changes in their Constitutions to protect marriage as a union of a man and a woman. It is a strict interference with States’ rights to draft their laws according to public opinion. The Rapporteur also wants to force all States to maintain marriage when one of the spouses changes his or her sex.[4] There again, it should be recalled that the ECtHR accepts States’ requirement of dissolution of marriage before recognizing the change of the sex. Moreover, the report requires a partner’s choice to change sex to be transcribed in the birth certificate of the child. This would rewrite the reality of the child’s birth and thus clearly violate his best interest.

The Rapporteur also expresses his desire for an automatic co-parent recognition between “same-sex partners” (§4.5.3). However, co-parent recognition is only for heterosexual couples since it is based on the presumption that the child was conceived through the couple. Homosexual partners to parents should furthermore not be able to legally claim parenthood since they have no connection to the child, due to their structural infertility. Introducing such a “fake reality” would create a confusion in national legislation because the meaning of family and parent would dissolve to a purely subjective concepts, such as “rainbow family.” However, a “rainbow family” is still radically different from a family i.e. natural family, as recognized by the Court in the previous cases. Not all cases should be treated equal, since equality in itself can lead to injustice and discrimination when the law pretends to treat different realities the same way.

The “LGBTIQ+ report” is based on a research conducted by the Rapporteur and ignoring the child’s rights and interests. Jonas Gunnarsson studied and interviewed children with “same-sex parents.” The research shows that these children would be treated well in the society, even though it is stated also that “same-sex families” avoid travelling abroad due to the risk of degrading treatment. The most significant deficiency of the research is that it does not include any assessment of the wounds endured to children who have been deprived of either a mother or a father. The upbringing of the child is thus not a matter of concern anymore although the United Nations Convention the Rights of the Child explicitly states in Article 3 §1 that all actions taken with regard to a child must be first and foremost in the interest of a child. UN Special Rapporteur on the sale of children, child prostitution and child pornography Maud de Boer-Buquicchio states that there is no right to a child under international law because “a child is not a good or service that the State can guarantee or provide, but rather a rights-bearing human being.”[5] Gunnarsson shows no interest to the child’s right, but only an interest to lobby for the creation of procreation and adoption rights for homosexual couples with the aim to create “rainbow families.”

Despite the rapid evolution of the case-law regarding homosexual persons in the last couple of decades, the report claims that issues regarding sexual orientation have advanced slower than other fields. The ECtHR has narrowed the margin of appreciation of an issue lacking consensus within the Member States, and its case-law has set a standard granting “same-sex couples” protection under Article 8. Still the Rapporteur continues to push for an imaginary uniform society within the Council, disrespecting cultural and religious diversity of the Member States. This act is an interference with States’ right to choose their own laws in accordance with public opinion and is a continuous imperialistic imposition of thoughts from the West. Moreover, it hurts human rights, especially of the children.

[5] HRC 37th Session, ‘Report of the Special Rapporteur on the sale and sexual exploitation of children, including child prostitution, child pornography and other child sexual abuse material’, 15 January 2018, §64.