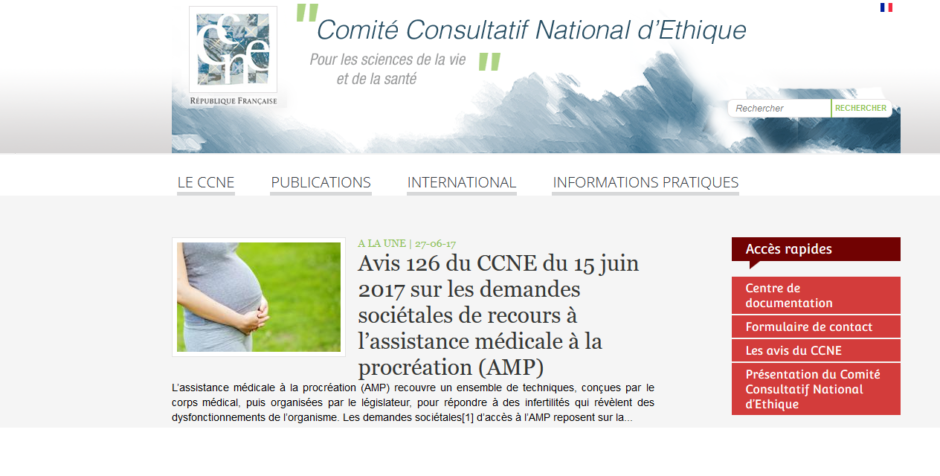 “Right to a Fatherless Child”: the CCNE Confuses Injustice and Frustration

CCNE: “Right to a Fatherless Child”

On the 27th of June 2017, the Comité Consultatif National d’Éthique [Consultative National Committee of Ethics] (CCNE) published its opinion No. 126 on societal demands of recourse to medically assisted procreation (MAP). It explains that it is in favour of access to MAP for single women and female same-sex couples, explaining that “opening MAP to persons who do not suffer from pathological sterility can be conceived in order to compensate an infertility resulting from personal orientations”.

This opinion was very much expected: on this question of “MAP for all”, a campaign promise from Emmanuel Macron, the latter had indeed declared he wanted to follow the opinion of the CCNE, despite its mere consultative role.

The CCNE however worried of “consequences for children”
In these demands for “equality” as regard procreation, led by LGBT-movements, the most forgotten and prejudiced is the child. Similarly, in this opinion, if the “consequences for children” are part of the “obstacles”, the CCNE still declares being in favour of MAP for single women and lesbians, evoking an injustice towards them. It amounts to confusing injustice and frustration.
Allowing single women and lesbians to procreate through MAP creates a true “right to a child”. Moreover, it is a “right to a child without a father”. A grave injustice is imposed on the child as he/she is intentionally deprived of a father, of his/her father’s lineage, of a male referent, all necessary to the building up of his/her personality, and in the sole aim of satisfying the individual will of adults. The most fundamental rights of the child are denied and the fathers are despised and downgraded to the mere role of sperm donors.

After “marriage for all”(1), “MAP for all”, and then…
The CCNE hence steps forward towards the admission of surrogacy, even though it declares in the same opinion being in favour of its prohibition. Indeed, if MAP is the only way for single women and lesbians to realise their wish to “have” a child partly from their blood, single men and homosexuals can only resort to surrogacy to fulfil the same wish. Now if MAP is accepted for women, how is it possible to refuse surrogacy to men, that is to say “a right to a child without a mother”?
Beyond, one can wonder whether, in the spirit of such a “right to a child without a father or without a mother”, “progress” will not consist in conceiving and giving birth to a child outside of a family, for family is not necessary anymore to procreation nor to education.

This favourable opinion to a “right to a child without a father” hence raises the question of the role of techniques and of medicine: to accept MAP without a medical indication amounts to considering that the technic replaces man and that medicine is not made to cure man but to upgrade it. It appertains to pure transhumanist logic.

The lost authority of the CCNE
The authority of this opinion is as questionable as the legitimacy of the instance which delivered it: indeed, the CCNE appears more and more as a factitious partner controlled by the majority to push its ideas forward, more than an ethical expert body. In theory, the CCNE was supposed to be independent. In practice, the government modified the composition of the CCNE in 2013 and 2016 in order to have a majority of its members to agree with the government’s position. From then, it is hypocritical from it to pretend to rely on this body’s opinion: it is but a way not to openly assume its political choices and responsibilities.

“MAP for all” and parliamentary and European agendas
The publication of this opinion coinciding with the beginning of the new parliamentary session, the risk is very high that the government will put this issue in the agenda of the Parliament, without waiting for the revision of bioethics laws planned in 2018.
This opinion could also find an echo at the European Court of Human Rights, where the case Charron and Merle-Montet versus France (n° 22612/15) is pending. In this case, two lesbian women complain that the French law restricts MAP to heterosexual couples suffering from a medically diagnosed pathological infertility or from a serious illness as a means to prevent its transmission.

The European Center for Law and Justice has been authorized by the Court to submit written observations: in them, it explains notably that the current French legislation regarding MAP is balanced, non-discriminatory and has the best interests of the children prevail.

All italics are free translations from the opinion of the CCNE
(1)« Marriage for all » was the slogan of the campaign in favour of “gay marriage” in France in 2013.