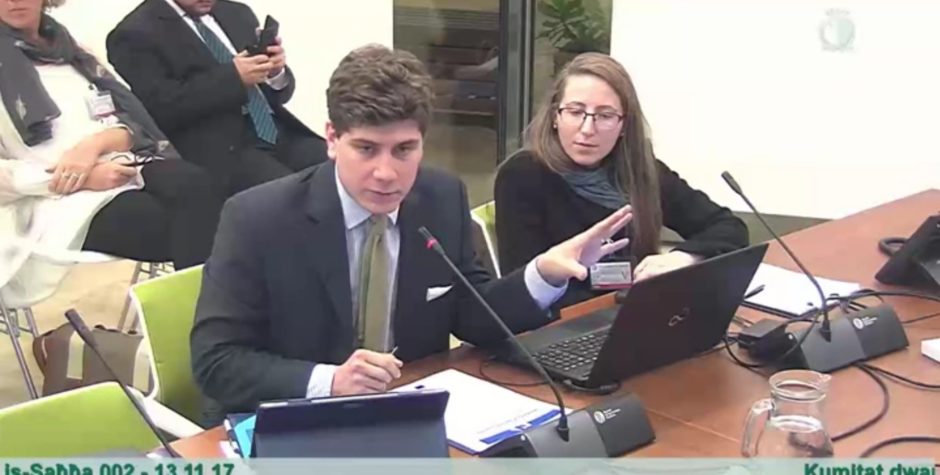 The ECLJ intervened in the Parliament of Malta on Monday the 13th of November 2017, during an audition of the Health Committee regarding gamete donation and surrogacy.

Malta currently has a law protecting the embryo and prohibiting gamete “donation” for scientific or reproductive ends. The socialist government wishes to go back on this protection. For this purpose, the Health Committee organised a parliamentary audition to which Christophe Foltzenlogel, jurist at the ECLJ, took part. He could hence explain to the deputies who were present that the current Maltese legislation was perfectly consistent with the European case law, that surrogacy was inherently contrary to Human Rights and that gamete donation causes numerous problems in the countries where it is allowed.

The intervention, available on the website of the Parliament, allowed to establish that surrogacy, be it commercial or not, supposes the production on demand of a child who is then abandoned at birth by his mother and whose filiation is consciously and officially altered. Such a practice is contrary to the Convention on the Rights of the Child of 1989 (article 7), to the Charter of Fundamental Rights of the European Union (article 3, paragraph 2) and to article 8 of the European Convention on Human Rights.

Regarding gamete donation, besides the problems due to the lack of donations and the freezing and destruction process of embryos, the principle of anonymity poses a problem regarding the right for a child to know his origins. Anonymity was established initially in several countries to encourage donations, to avoid future parenting conflicts and to give and ethic aspect to the donation through free donation and disinterest of what will be done of the sperm or eggs. Mark Sant, a gynaecologist, who took the floor during the meeting, recognised that the lifting of anonymity would destroy the donation program, for the children would then be able to find the donor against his will. Yet, according to the German Constitutional Court and the ECHR, the child has, by principle, a right to know his origins. For the ECLJ, the best interest of the child is certainly not to be cheated by the State on the biological reality of his filiation.

The Maltese organisation Life Research Unit, teamed with the Sallux foundation also organised a conference in Malta University in the morning, as well as a conference opened to the press in the afternoon, before presenting the same panel of experts to the Maltese deputies. In addition to the ECLJ, Dr Joanna Rose and Mrs Esme Wiegman, director of a Dutch association of patients (“Patiëntenvereniging”) and former deputy, contributed to highlight the harmful impacts that would result of a legalisation of surrogacy and gamete donations.

Dr Rose’s intervention was particularly remarkable for she was herself born of an in vitro fertilisation with an anonymous sperm donor. To this day, she still doesn’t know her biological father and was hence able to give a concrete and moving testimony of the ordeal she suffered and is still suffering from. The title of her thesis sums up the main issue at stake with gamete donations: “A Critical Analysis of Sperm Donation Practices: The Personal and Social Effects of Disrupting the Unity of Biological and Social Relatedness for the Offspring” (available here).

It would be a delicate problem for the Maltese deputies, were they to legalise gamete donation in their country. Moreover, Malta is a small island of only 450,000 inhabitants, where the risks of consanguinity would become real were anonymous sperm donations used several times.

The Maltese press largely covered this conference, with the following publications: Malta Independent, Malta Today and The Times of Malta.