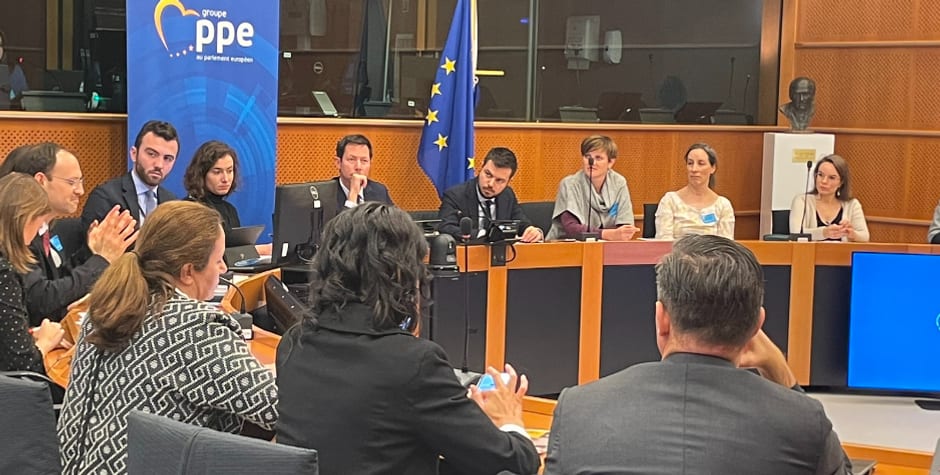 On 8 November 2022, a conference was held in the European Parliament in Brussels on  « Challenges and dangers of children exposure to sexual explicit content in the digital era - The harmful impacts of early access to online pornography ». It was organized by the Federation of Catholic Family Associations in Europe (FAFCE), in collaboration with the team of François-Xavier Bellamy MEP (EPP).

The European Centre for Law and Justice was invited to intervene on the legal aspect of the issue: the text of the intervention appears below.

It is to be hoped that this conference will now make it possible to federate in the battle against the pornographic scourge both the associations in the field and the European decision-makers. As expressed by Mr. Bellamy, it must be « a point of departure for a better protection of children in Europe. »

« First, I would like to thank Mr. Bellamy, Member of the European Parliament, and the Federation of Catholic Family Associations in Europe for organizing this important conference.

The European Centre for Law and Justice is working on the issue of pornography: our research will lead to the publication of a report or a book in 2023.

Given the harmfulness of pornography, which medical experts will certainly talk about, it is absolutely necessary to regulate access to it, in particular to prevent children from accessing it, while also knowing that pornography does not suddenly become harmless at the age of 18.

In general, the protection of children from exposure to online pornography is a difficult issue to resolve legally because it currently involves a clash of rights:

- On the one hand, the internationally recognized rights of the child that derive from the 1989 Convention on the Rights of the Child (Article 17.e. states that « States Parties shall encourage the development of appropriate guidelines for the protection of the child from information and material injurious to his or her well-being ») and from all international texts dealing with specific matters related to the issue of pornography,

- On the other hand, there is the right to respect for private life (for example, for adults who want access to pornography), there is freedom of expression (often invoked by pornography advocates), or the rules on personal data protection (including the General Data Protection Regulation - 2016).

For a legal look at the issue of the day, I rely on a scheme created by Lola Velarde of Political Network for Values and that we completed. It presents a range of solutions, more or less effective in themselves, but which combined, can allow to protect children from pornography. I will comment on a few important points.

It may be appropriate to begin by expressly recognizing, through non-binding resolutions, the danger of pornography, at all levels, for example to public health, as is done for smoking or alcoholism. In the United States, 17 states have done so on the basis of a project initiated by the National Center on Sexual Exploitation (NCOSE).

Naming the evil is good, acting concretely to prevent children from accessing pornography is better. European institutions expressed themselves in this way in the following main texts.

Within the Council of Europe, resolutions call on States to act in this regard:

- The 2021 resolution « Gender aspects and human rights implications of pornography » is also relevant.

- The subject was particularly addressed in the resolution « For an assessment of the means and provisions to combat children’s exposure to pornographic content » adopted in April this year.

Within the European Union, the Audiovisual Media Services Directive revised in 2018 requires member States to ensure that audiovisual media services « which may impair the physical, mental or moral development of minors are only made available in such a way as to ensure that minors will not normally hear or see them. […] The most harmful content, such as [...] pornography, shall be subject to the strictest measures » (new article 6a).

- Another measure: Regulating moderation and notification policies by imposing obligations in this field on online services providers can help eradicate some of the harmful content that would otherwise be accessible to minors. This is of particular importance for platforms that are not "pornographic" per se but on which such content can be found, including social networks. It is to be hoped that the new « Digital Services Act » that has just been adopted will make it possible to step up the fight against pornography, in particular by making very large online platforms (such as Google, Facebook...) more accountable. For example, online platforms will have to put in place mechanisms enabling users to easily report illegal content and they will have to process notices quickly. They will have to cooperate with trusted flaggers whose notices will be given priority. Very large online platforms have additional obligations to manage the systemic risks associated with the services they provide, including with regard to the rights of the child.

- Another measure: Requiring pornographic sites to verify the age of their users is a measure widely promoted at the European level. In 2022, in the European strategy for a Better Internet for Kids, the European Commission « invites Member States to support effective age-verification methods » and « industry to effectively implement » such measures. But it faces technical and legal difficulties, as the examples of legislation in the United Kingdom and, more recently, in France show. However, it is not up to the legislator to solve these technical difficulties, but to the providers of pornographic content!

- Finally, we come to the prohibition of pornography. A consensus can be reached on criminalizing "violent" pornography (if it is not a pleonasm) and "extreme" pornography: the Parliamentary Assembly of the Council of Europe has called on member states to do so in the resolutions I mentioned. But banning all forms of pornography is an obviously controversial measure, which in any case has the advantage of taking into account the fact that pornography is intrinsically evil and contrary to human dignity. On this point, I would like to note in particular the existence of the International Convention for the Suppression of the Circulation of and Traffic in Obscene Publications adopted within the United Nations in 1923. Several dozen States are parties, including Member States of the European Union. Through this treaty, they have committed themselves to prosecute and punish pornographic traffic, in very broad terms, both as regards the types of content and the acts related to it (production, possession, circulation etc.). The question that arises is that of its relevance in the Internet age; but given its very broad scope, this text does not seem anachronistic.

Legal bases exist at the European and international level to fight for the protection of children but it is the will that tends to be lacking. Hence the importance of convincing the general public,  decision-makers, the pornography industry (although it has, in fact, no interest in it) of the necessity of such regulations. »