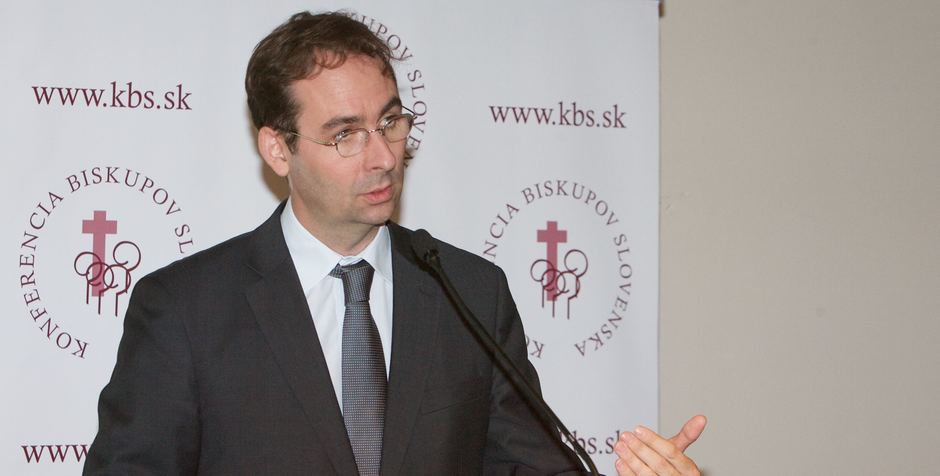 “The whole continent has arrived to a situation in which wounded families have become an accelerator of the demographic crisis” stated the Metropolitan of Bratislava and President of the Slovak Bishops’ Conference, Archbishop Stanislav Zvolenský.

Anna Záborská, an MEP from Slovakia, Luca Volontè, former EPP President at the Assembly of the Council of Europe and Antoine Renard, FAFCE President, attended the conference and agreed on the conclusion that Europe is experiencing a deep crisis of demography, values and culture. Low birthrates will inevitably cause economic, social and cultural problems. There are two basic causes of the situation: the non-existence of pro-family policies joined with the lack of social evaluation of the family and the marginalization of ethical and religious values, which are necessary for the survival of every democratic society.

Dr. Grégor Puppinck, Director of the European Centre for Law and Justice (ECLJ), was invited to explain how the institution of the family is diluted within human rights.

Indeed, according to Dr. Puppinck, while the Court has long retained the natural understanding of the relationship between family and society, the evolution of morals has led to the reconstruction of this relationship. Certainly, the emergence of LGBT rights has actively contributed to the upheaval of the legal understanding of the family. However, the cause of this upheaval is more to be seen in the emergence of a right to the social recognition of emotional relationships and marriage, the latter being conceived as an autonomous value, like an individual freedom independent of its social purpose, which is the foundation of the protection of the family.

The emptiness of today’s new notion of family, which is but the recognition of a “relationship”, continues to be dissolved. The questions of polygamy, of new forms of “multi-parenthood” and of the inequality of rights attached to marriage and civil partnership remain. This process is not an inevitable historical phenomenon, it is the inheritance of legal and political decisions which, step by step, have led to the opposite of the original intention of the authors of the Convention, who wished to protect families from the State, and not to entrust to the State the power to redefine the family.