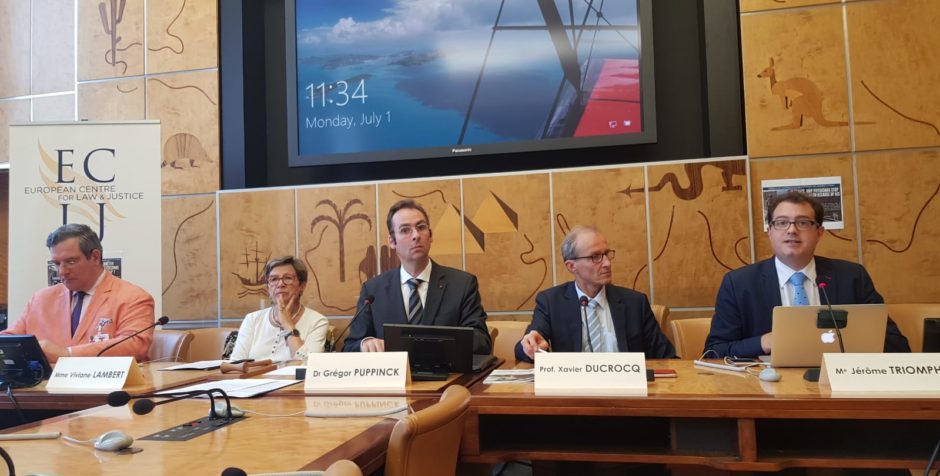 Vincent Lambert: his mother's moving testimony at the UN in Geneva

Vincent Lambert: his mother at the UN

The English translation of the text is below.

I am neither a doctor nor an attorney; I am Vincent’s mother, and of course nothing will stop me from defending the life of my son.

I want to point out that his father, my husband, is not here but that he stands by my side and is entirely supportive of our efforts.  I am often seen, I know, but considering his age I want to spare him, which is why I am here today by myself.

That’s it.  I would like to speak to you today as a mother, and from the heart of a mother.  I am at his (Vincent’s) side with his father, my husband, every single day.  In order to visit and take care of our son, we had to leave our home and find a place to live in Reims.  We wanted, of course, that he not be left alone, and to stimulate him, be close to him, and give him all the love we can still give, because Vincent is not at the end of his life; Vincent is not a vegetable.  I have never seen a vegetable turn its head when you call its name.  I have so many photos and videos that completely contradict what is being said in the press.

When I ask Vincent to turn his head, he looks at me; when I ask if he is happy—and I don’t know if this is a reflex or something more— but he does blink his eyes.  And what traumatized me the most, I can tell you, is that the day before that on which the doctor had decided to stop his food and some of his hydration, the Sunday on which we visited him, Vincent was very emotional; so I asked him “what’s going on Vincent?” and he began to cry.  And this I can say is a sign for me that Vincent truly has an active conscience.  And it is a sign as well, because we knew the doctor was to stop the feeding tube during the week of 20th May, so I had asked the personnel to tell him nothing about it.  I thought it was us parents who had to prepare him for this because we were the ones confronted with the situation, but no! No, they had told him about it. And when Vincent saw us on Sunday, the day before they were to stop his nutrition, he cried.  And we cried with him, of course. (crying) I’m sorry, I’m just a bit emotional right now.  I am not used to this kind of situation and normally I prefer to write my statements, but I am here to proclaim as forcefully as I can that they want to murder Vincent.  Yes, that is the appropriate word.

I saw Vincent, when I would sometimes give him a spoon of compote, or of creamy dessert, and he would swallow them.

Why? Why not listen to us? Vincent is a human being, he is not an object, there holding his head under water and I… It’s dramatic! That’s it, if I have come here for anything today, it is in the hope that at least his life might be defended here. Because the State, nobody listens to us, nobody wants to hear us, while we have evidence, we are the parents, we know our son, and he is used to us in his daily life and he expresses himself. That’s it, he doesn’t talk but he expresses himself.

This is all I had to say, and I thank you very much for anything you can do.