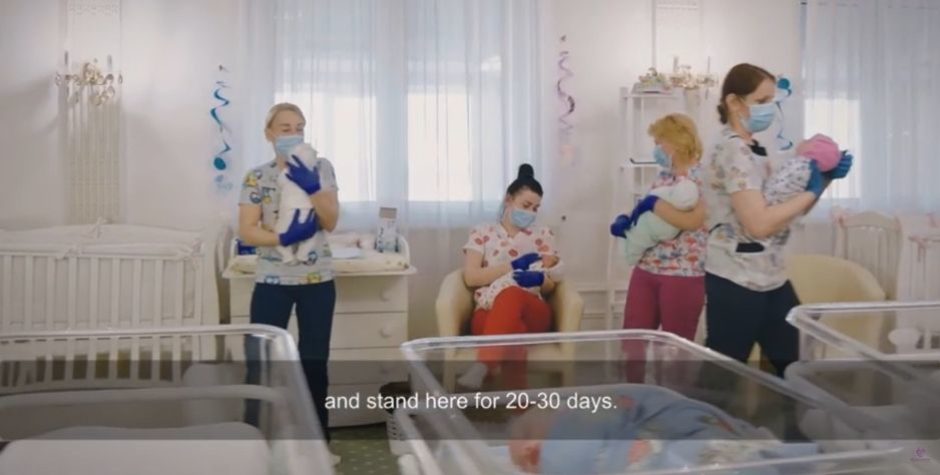 Disputes over Surrogacy in Ukraine

The image of several dozen newborn babies waiting in a Kyiv hotel for their sponsors to come and collect them revealed an often little-known reality: Ukraine, a Council of Europe member state, is an important centre of the international reproduction market. Guests can find oocyte donors and surrogate mothers of their phenotype or, to put it more simply, white women, for a much lower price than in the United States. Even clinics in Asia come to Ukraine to obtain "Caucasian-type" oocytes.

There is theoretically a legal framework - infertile married parents, genetic link with at least one of the two buyers, no genetic link between the surrogate mother and the child - but some agencies shamelessly break free from it. The surrogate mother renounces her rights in a notarial contract with the buyers, which are directly registered in the birth certificate of the child thus obtained. This act is therefore false since it indicates as mother a woman other than the one who gave birth.

This shocking image, first published by a surrogate motherhood agency to reassure its clients and try to force the hand of the Ukrainian government to open its borders, has had the merit of drawing attention to these children conceived and delivered under contracts, snatched from their mothers at birth and sold. It shows how "surrogacy" is contrary to the most basic humanity. It has provoked many reactions, both in Ukraine and abroad.

It was Lyudmyla Denisova, Ukrainian Parliament Commissioner for Human Rights, who informed the press that more than a hundred newborn babies were waiting for their buyers, blocked by the border closures because of the confinement. She denounced the mass surrogacy industry which promotes babies as "high quality products". Noting that this situation proves that the state is not taking adequate measures to protect the rights and dignity of children, she called on Parliament to ban surrogacy for the benefit of foreigners, saying that children in Ukraine should not be trafficked.

Archbishop Sviatoslav Shevchuk, Major Archbishop of Kiev and Galicia, Head of the Greek Catholic Church in Ukraine, and Archbishop Mieczyslaw Mokrzycki, Archbishop of Lvov and President of the Conference of Catholic Bishops of the Latin Rite, also issued a joint letter in mid-May strongly condemning the practice of surrogate motherhood: such a contempt for the human person and his dignity is unacceptable. They called on the government to ban surrogacy. They added that the fact that this practice is legal prevents development of Ukraine and discredits the country in the eyes of European society. They called on the government to adopt a family policy ensuring that Ukrainian mothers no longer need to trade their bodies and children for their own survival and that of their families. They stated that surrogacy, even so-called non-profit-making motherhood, is inherently bad morally, causing untold suffering for all those involved, first and foremost children and mothers, but also intermediaries and the buyers. When it is commercial, it must be judged even more harshly, because it adds to this the fact of buying and selling the functions of the woman's body and the very person of the child.

Indignation towards these children has not remained confined to Ukraine. The press in many countries echoed it and Swedish Member of Parliament Alexander Christiansson, a member of the Parliamentary Assembly of the Council of Europe, brought the issue to the Committee of Ministers. In a written question submitted on June 3, he recalled that the European Convention on the Legal Status of Children Born out of Wedlock provides that "Maternal affiliation of every child born out of wedlock shall be based solely on the fact of the birth of the child." However, although Ukraine has ratified this convention, its Family Code provides that the filiation of a child born through a surrogate mother is established directly with the "future parents", even in cases where the child was conceived with eggs donated by a third person. The woman who gives birth to the child does not therefore appear in the filiation of the child, which is contrary to the Convention.

The Committee of Ministers should therefore reply and indicate what action it intends to take with regard to Ukraine.

The convention invoked by Mr Christiansson is an application of the principle of mater semper certa est, the universal foundation of the law of filiation: the mother is always certain, it is the one who gives birth. This principle was also the basis of the famous Marckx[1] judgment handed down by the European Court of Human Rights in 1979, which condemned Belgium for requiring the mother of a natural child to recognize her child in order to establish filiation. The same Court also recognized in the case of D and others v. Belgium[2] that the refusal to automatically confirm a gestation by another person abroad was justified by the legitimate aim of combating human trafficking.

Surrogacy constitutes the sale of a child as defined in Article 2 of the Protocol to the Convention on the Rights of the Child on the sale of children: "Sale of children means any act or transaction whereby a child is transferred by any person or group of persons to another for remuneration or any other consideration." The sale or trafficking of children is prohibited by international law "for any purpose and in any form".[3] Ukraine is party to both treaties.

The United Nations Special Rapporteur on the sale and sexual exploitation of children, Ms. de Boer-Buquicchio, published a report in 2018 on the sale of children in the context of surrogate motherhood.[4] She pointed out that Ukraine is a centre of international commercial surrogacy and that, unlike other states such as India, Nepal, Cambodia, Thailand and the Mexican state of Tabasco, it has not taken any measures to limit or prohibit this practice.

Surrogate motherhood is contrary to many international conventions ratified by Ukraine. In addition to the Convention on the Rights of the Child and its additional protocol on the sale of children, these include the Convention on the Elimination of All Forms of Discrimination against Women, as well as conventions prohibiting slavery and trafficking.[5] A State that respects its international commitments cannot admit this practice on its territory nor endorse it when its nationals resort to it abroad.

Moreover, the demographic situation in Ukraine is disastrous. According to the latest official count, Ukraine's population stood at 37.3 million, compared with 52 million in the early 1990s. Even taking into account the regions that have come under Russian control, that is a loss of 10 million people, 20% of the population. Economic difficulties, political instability, poverty and corruption have led to high emigration and a falling birth rate. The fertility rate is now below 1.4 children per woman. Ukraine has no more children except for export. Sponsors and intermediaries take advantage of the destitution of Ukrainian women to strip them of even their most intimate and precious possession, motherhood.

These children stuck in a hotel in Kiev force us to face reality: surrogate motherhood means producing children as commodities to satisfy the desire of wealthy adults. It involves the exploitation of poor women. Cruel and destructive for children and mothers, this practice must be eradicated.[6]

Image source: Capture of a video from "Bio Tex Com Center for Human Reproduction" announcing a reduction in the maintenance costs of children not recovered by sponsors from 50€ to 25€ per day.

ECLJ Written Contribution for the UN By Priscille Kulczyk1561035300015
The call for contributions launched several weeks ago by Mrs. Maud de Boer-Buquicchio, Special Rapporteur on the sale and sexual exploitation of children, has provided the European Center for Law and...
Read More

ART-Surrogacy What Role for the ECHR?By Grégor Puppinck1537455600000
Article published in French in FigaroVox 18/09/2018 FIGAROVOX/TRIBUNE – While the European Court of Human Rights has accepted several cases relating to the ART and surrogacy, Grégor Puppinck stresses...
Read More
More Related Articles